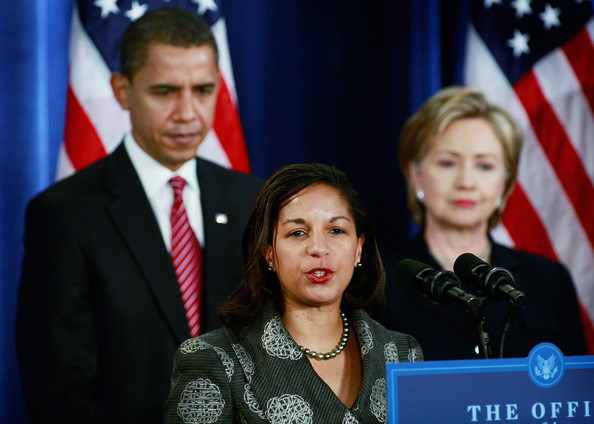 A 10-page New Yorker feature explaining "How the Arab Spring remade Obama’s foreign policy" is getting attention mostly for a phrase in its last paragraph: "leading from behind." The phrase was intended to be flattering; it has been received as anything but.

Here it is in context:

Obama may be moving toward something resembling a doctrine. One of his advisers described the President’s actions in Libya as “leading from behind.”That’s not a slogan designed for signs at the 2012 Democratic Convention, but it does accurately describe the balance that Obama now seems to be finding. It’s a different definition of leadership than America is known for, and it comes from two unspoken beliefs: that the relative power of the U.S. is declining, as rivals like China rise, and that the U.S. is reviled in many parts of the world. Pursuing our interests and spreading our ideals thus requires stealth and modesty as well as military strength. “It’s so at odds with the John Wayne expectation for what America is in the world,” the adviser said. “But it’s necessary for shepherding us through this phase.”

Emphasis mine. Rather clearly, the advisor in question meant it to be complimentary, a description of a shrewd approach to foreign policy-making in a changed world. And that it’s an assessment shared by Ryan Lizza, the author of the piece, shares is obvious both from a larger read of the piece and his statements in subsequent interviews, such as on today’s edition of NPR’s "Fresh Air."

Writing at the magazine founded by his late father, neoconservative columnist John Podhoretz gets in the best cracks at the phrase:

The crystallizing phrase “leading from behind” may not be something you’ll see on a sign at the 2012 Democratic convention, but it will almost certainly be in the acceptance speech of the nominee of the Republican party at its 2012 convention, and will be thrown in Obama’s face during the presidential debates by his GOP rival, and will be the centerpiece of the critique of Obamaism going forward. It’s so revealing, in fact, that I wouldn’t be surprised if the White House goes on a hunt to find the person who said it in order to defenestrate him before he does more colossal damage to his boss’s chances of reelection.

His colleague Michael Rubin reels off a series of one-liners and then gets serious:

More seriously, while President Obama may believe that the U.S. is reviled in much of the world, a lesson I learned from years crisscrossing the Middle East and, more broadly, Africa and Asia, is that when it comes to American policy, other nations will criticize us no matter what we do. We are “damned if we do, damned if we don’t.” In such circumstances, the best thing to do is to worry less about what people might think, and simply do what we think is right. There is a State Department corollary to this which became apparent during the Cold War, in the run-up to the Operation Iraqi Freedom, and many times since. Perhaps instead of seeking to change American policies to win plaudits in their countries of residence, American diplomats would be better served arguing and defending American policies, leaving no criticism unanswered.

It is better to lead from behind and to put others in front, especially when you celebrate victory when nice things occur. You take the front line when there is danger. Then people will appreciate your leadership.

So despite the funny phrasing, at the heart of the idea of leading from behind is the empowerment of other actors to do your bidding or, as in the case of Libya, to be used as cover for a policy that would be suspect in the eyes of other nations if it’s branded as a purely American operation.

Frankly, what Obama did was a massive bait and switch. He used the Arab League’s support for a no-fly zone to win United Nations support for a far larger military intervention. The debate about the merits of this style of leadership should also take into account what was accomplished.

Lizza’s right so far as it goes. Obama demurred, seeming to side with Defense Secretary Robert Gates and others who argued against intervention, and allowed France, the UK, and the Arab League to get out in front of him. And then he got a Security Council resolution passed—somehow getting Russia and China to abstain, rather than vetoing—that called for much stronger measures than any of them wanted while insisting the United States would only play a supporting role!

There’s only a wee problem with all this: the United States remains the world’s only superpower.

As late night comedian Jon Stewart quipped, the U.S. turning the mission over to NATO is "like Beyoncé saying she’s ceding control to Sasha Fierce." Having backed the intervention into Libya and declared that the only acceptable outcome is for Muammar Gaddafi to be ousted from power, it’ll be the United States—not France, not the United Kingdom, and certainly not the Arab League—who’ll be blamed if things go wrong.

Further, while Lawrence Kaplan overstates the case when he declares that "A campaign devised to showcase the benefits of multilateral action has done exactly the reverse," he’s certainly right when he says "someone on the Obama team ought to have inquired about European capabilities." The story is a familiar ones to regular readers of New Atlanticist: "Ten years ago, the U.S. contributed roughly half of NATO’s defense budget; today, it accounts for three-quarters of the alliance’s military expenditure. During the same period, the number of active duty military personnel in Europe declined by more than one third."

The result has been predictable: The French and Brits quite literally are running out of bombs and otherwise lack sufficient manpower and equipment to pull off what would seem a rudimentary operation. By contrast, despite the fiasco that Iraq turned into after the fact, the United States managed to overthrow Saddam Hussein’s much more formidable regime in three weeks all by its lonesome.

And, frankly, that means leading from the front.

The "leading from behind" technique is a brilliant strategy for coalition building. Both Mandela and Obama used it quite successfully in getting buy-in from crucial communities, letting other people think that the ideas were their own. And, certainly, Obama used it successfully to maneuver his preferred policy through the Security Council, something that not even Bill Clinton could do on Kosovo.

But, having entered into a decision to act, the policy must actually be carried out. And Obama’s passing the buck to the French and Brits has yielded stalemate. So: Now what? Is the United States committed to ousting Gaddafi in order to protect Libya’s civilian population? Or is it willing to see a protracted conflict, with untold innocents dying while "NATO" issues decrees that it can’t enforce because its most significant member is taking a supporting role?