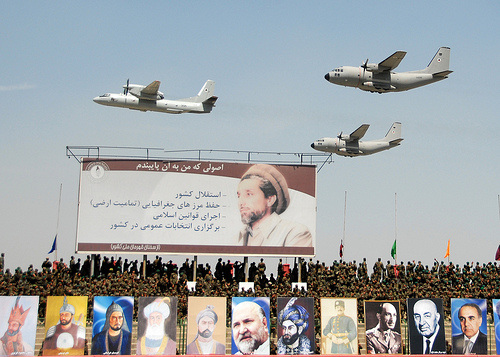 Today marks Victory Day in Afghanistan, the anniversary of the Mujahedeen overthrow of the Afghan socialist government in 1992. While a cause for celebration in Afghanistan, the subsequent years were marked by civil war, Taliban consolidation, and eventual intervention by the United States in 2001. To be sure, the last several decades have been devastating for Afghans—life expectancy plummeted, literacy levels were shattered, and fear replaced security. This is the context in which the nearly 50 countries of the NATO-led International Security Assistance Force work in partnership with the Afghan government.

For the past decade, the international community has been attempting to increase human security in Afghanistan by supporting economic development, promoting Afghan governance, and developing the Afghan security forces. Filled with challenges, international efforts can learn from previous efforts to bring security and stability to Afghanistan. Larry Goodson and Thomas Johnson recently offered their non-flattering assessment of NATO efforts by identifying “Parallels with the Past.” In their article for the Foreign Policy Research Institute, Goodson and Johnson argue: “In its present form, current U.S. Afghan strategy holds little promise for success, especially if our assessment of the parallels with the past is accurate. As with all strategies, U.S. leaders must consider carefully the intensity and depth of American interests—that is, consideration of the ends must precede the ways and means.”

Their assessment draws parallels between Soviet and NATO efforts—Afghanization of the conflict, reconciliation efforts, and a population-centric approach to security. Additionally, they see both interventions have:

The parallels exist, but there are also key differences. First, Pakistan does have different interests than NATO, but does not have carte blanche due to international pressure from the United States and the Afghan government. Second, while President Karzai is internationally unpopular, he retains the support of the Afghan population. Third, the top/down approach to supporting a central government is supported by new efforts at the district and provincial levels. Finally, Afghans overwhelmingly favor a unified country and there have been few calls for division along ethnic lines. Reconciliation programs have made modest gains, but there are reconciliation programs.

To be sure, things in Afghanistan are difficult and it is easy to be pessimistic about Afghanistan. But, the progress should not be overlooked either–violence is largely confined to a few of the 34 provinces that border Pakistan and where there are large concentrations of NATO forces. As we consider the lessons Goodson and Thompson offer, we should also consider the lessons of Victory Day. While Afghans defeated the Afghan socialist government, it also ushered in two new decades of war. While international assistance it a key piece to bringing peace and security to Afghanistan, fundamentally, it is up to Afghans to determine their future.

Derek S. Reveron, an Atlantic Council contributing editor, is assigned to NTM-A; his latest book is Exporting Security: International Engagement, Security Cooperation, and the Changing Face of the U.S. Military. He is currently on leave from the Naval War College. Photo credit: Flickr.