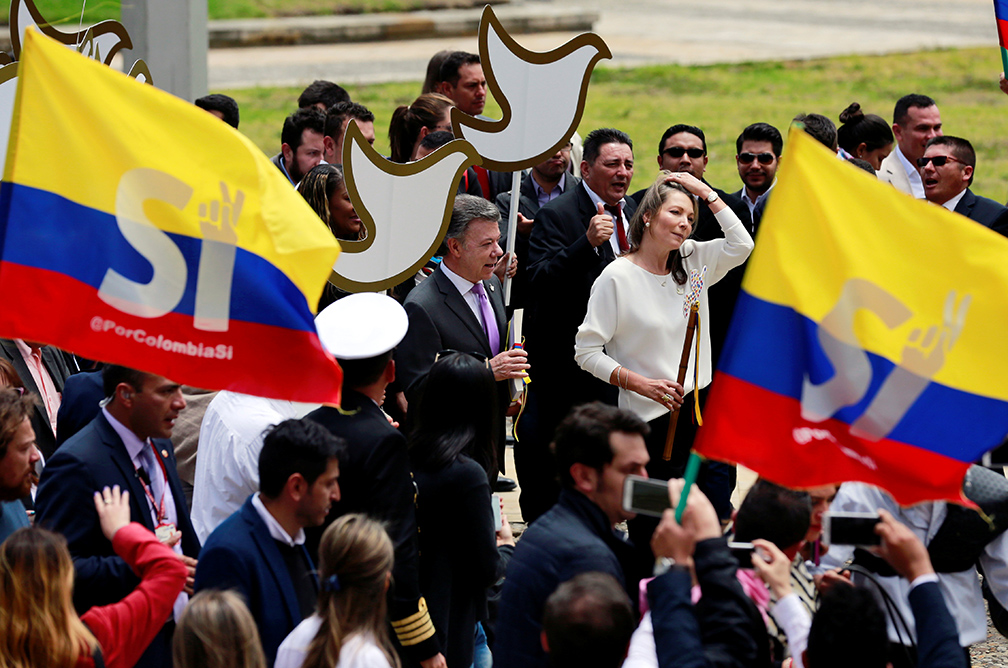 Colombia’s government and the leftist rebels of the Revolutionary Armed Forces of Colombia (FARC) on August 25 finalized a deal that ends fifty-two years of conflict. A bilateral ceasefire went into effect on August 29. More than 220,000 people have been killed and six million displaced by the armed conflict. The deal will be put to the Colombian people in a plebiscite scheduled to be held on October 2.

What lessons does the Colombian experience hold for peacemakers looking to end wars raging around the world—from Syria to South Sudan? Jason Marczak, director of the Latin America Economic Growth Initiative at the Atlantic Council’s Adrienne Arsht Latin America Center, and Andrea Saldarriaga Jiménez, a program assistant in the center, discuss this and more in an interview with the New Atlanticist’s Ashish Kumar Sen.

In the 2000s, as defense minister in Alvaro Uribe’s administration, Juan Manuel Santos oversaw many of the operations that dealt significant military blows to the FARC. As president, Santos has embraced the role of a peacemaker determined to seize the opportunity provided by a significantly weakened guerrilla group. The setbacks suffered by the FARC made it clear to the group that it could only achieve its goals through political means. Peace negotiations were started in 2011, a year after Santos was elected president.

Marczak: The only reason these negotiations were able to start was that the FARC had been severely weakened by the Colombian military. If the military hadn’t had the kind of success it had over the last decade—a lot of it due to US financial and technical support–the FARC would never have come to the table.

A lesson for governments that are dealing with insurrections in their own territory is that the best opportunity for peace is when your enemy is begging to come to the table, and that generally happens once you have shown your military muscle and might.

Saldarriaga Jiménez: In conflict resolution we talk about a mutually hurting stalemate. This is when both parties realize they cannot win the conflict via military confrontations without incurring huge losses. The Colombian government realized that it has been at war for fifty years and even though it has weakened the FARC militarily, the FARC still controls parts of the territory. The FARC also realized the limitations of its military operations. This is when a conflict is ripe for negotiation.

Role of the International Community

Marczak: The fact that there is so much support from the international community for achieving peace in Colombia might distinguish it from other conflicts. There aren’t spoilers in the international community, whereas in Syria, for example, there are spoilers in the global community that don’t want some kind of peace to be achieved between the rebels and [Syrian President Bashar] Assad. In Colombia, even the FARC’s closest allies—Venezuela and Cuba—wanted peace between the government and guerrilla group.

Saldarriaga Jiménez: This was very much a national initiative. The Colombian conflict is not the Yemeni or Syrian conflict in that the government works, there is rule of law, there is democracy. The international community supported the Colombian government, but did so without intervening.

Santos’ approval ratings hover in the low twenties. Nevertheless, the Colombian president did not let his unpopularity get in the way of his pursuit for peace. It is this zeal that the Atlantic Council acknowledged when it presented Santos its Global Citizen Award in 2015. FARC leader Rodrigo Londoño, better known by his nom de guerre Timochenko, too has shown a commitment to peace. This commitment is driven in part by the fact that the guerrillas have suffered serious military setbacks.

Marczak: President Santos has staked his presidency on achieving this peace deal. He recognizes how history will look back at him as being the president that was finally able to get a peace deal with the FARC.

Still, there is resentment among some Colombians toward making any type of peace deal with the FARC. This is understandable given the great trauma suffered. But some of the more controversial elements of the deal—allowing for political representation, and the fact that members of the FARC will, unless under certain circumstances, not serve jail time—were necessary to bridge the ground between the two sides.

On the FARC side, too, Timochenko has worked to rally his troops around the deal. It will be critical for not just Timochenko to talk about following through with the terms of the deal, but for other FARC commanders to talk to their local troops about the need to comply with the terms of this agreement. The last thing we can allow to happen would be a situation in which we have certain fighters of the FARC deciding that they don’t want to demobilize.

Saldarriaga Jiménez: A critical component of Santos’ leadership was to not let considerations of political costs intervene with the decisions that he needed to make. He has obviously spent a lot of political capital on getting this peace deal. He knows that this is a moment in Colombia’s history in which peace can be achieved.

The Colombian peace process was the first in the world that included a formal role for victims of the conflict—they got to interact directly with the negotiators. Details of the negotiations were shrouded in secrecy as the peace process began to get off the ground. It is this fact that gave the process its best chance of success.

Marczak: These negotiations have been tested many times in the last four years. Both sides suspended the negotiations and then found a way to come back regardless of whether there were FARC attacks on government soldiers, ceasefires were broken, or different points on the agenda couldn’t be negotiated.

The negotiators were flexible and willing to find parts of the six-point agenda where it would be easier to first find common ground and left the more difficult aspects. This gave momentum to the peace process. It was also critical that both sides were willing to swallow their egos at certain points and come back to the table even after weeks of breaks in negotiations.

Saldarriaga Jiménez: It was crucial that during the first few years in the negotiations process everything was kept secret. We knew that they were negotiating, but we didn’t know what exactly was being discussed. That provided a protection to the negotiations that other conflicts don’t have. In Yemen, for example, where more information is available on the negotiations, the deal that is on the table is more exposed to external scrutiny. This might be creating hurdles in the negotiations.

In terms of timing, while there was pressure on Santos to announce a deal during President Obama’s visit to Cuba in March. The government wisely said that it needed more time.

Managing spoilers will be critical to the success of the peace deal. Colombia has experience reintegrating former guerrillas. What will be essential is ensuring that rank and file FARC fighters fall behind Timochenko and adhere to the terms of the peace deal.

Marczak: Colombia has had experience with demobilization in the past. The government has an agency that is dedicated to reintegration. The government should not, nor will it, hold back militarily in dealing with spoilers. It is critical to deal with them swiftly. If you don’t, you run the risk of spoilers playing an outsize role in the future of the country.

We can see from the civil war in El Salvador or Guatemala what happens when arms stay in society or when disaffected members of former fighting units are not sufficiently reincorporated into society. As they say, peace will be even more difficult at times than war.

Saldarriaga Jiménez: At the beginning of the peace process, both the FARC and the government sat down to identify potential spoilers. On the government side, for example, acknowledging that paramilitary forces that are still present in the country have connections to the state opens a window to talk about those issues and prevent them from becoming bigger problems in the future. The government acknowledged that the ELN (National Liberation Army), the other big guerrilla group, can be a spoiler and that’s why it engaged in exploratory conversations with them a year ago. This creates an opportunity for the ELN to either jump in the train with the FARC or get left behind. It puts pressure on the spoilers to be part of this or some other type of peace process.

Marczak: From the beginning, the peace process wasn’t about merely seeking punishment for the FARC. It was a process of trying to figure out how to end the conflict, reintegrate guerrillas into society, allow political representation of the FARC in Congress, and develop rural communities.  This peace goes far beyond a military peace. It is a comprehensive socioeconomic and political pact to resolve the conflict. The lesson here for other countries is that peace in an internal conflict needs to be wholly comprehensive.  In the end, you also have to have the support of the people. It is the Colombian people that will be the facilitators of that reintegration.

Saldarriaga Jiménez: This effort addresses the root causes of the conflict. These are not that there is a difference in ideology, but that there are a lot of inequalities in rural Colombia and we need to make sure that the state covers areas in which it has not been present.

The Colombian conflict is very different to other conflicts in the world in that we don’t have strong ethnic divisions in the way we see the armed struggle. Of course, there are certain minorities—such as women, Afro-Colombians, indigenous groups, and LGBT communities—that have been affected in different ways, but they are all organized in strong civil society groups and their main message is one: “We want peace because we don’t want any more victims.” In Colombia, the government has listened. The peace agreement has, to some extent, a differentiated approach. The lesson for other countries is: If you don’t have a structured and united civil society telling you what is happening in areas that you don’t notice, it is very difficult for the government to see where they need to be looking.