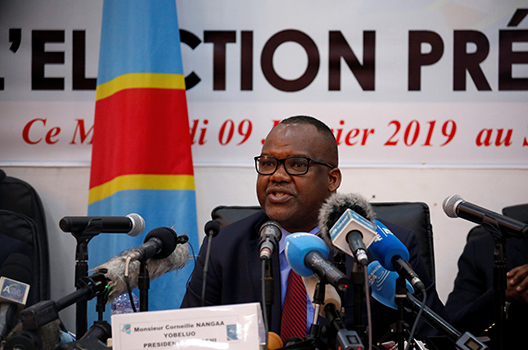 Under cover of darkness, in the wee hours of the morning of January 10, Congo’s Independent National Electoral Commission (CENI) declared Felix Tshisekedi to be the winner of the 2018 presidential elections. CENI announced that Tshisekedi had received 38.57 percent of the vote, defeating both the regime’s candidate, Emmanuel Shadary (23.77 percent) and his opposition opponent, Martin Fayulu (34.74 percent).

Reaction was swift. Civil society observers, among them the Catholic Church, and some foreign chanceries, made it clear that they considered the official vote count untrustworthy. Mathematics is on their side: statistical analysis of pre-election polling data shows a less-than 0.0000 percent chance that Tshisekedi could have performed as well as CENI says.

The outlines of the alleged bargain between Kabila and Tshisekedi are grim:  in exchange for handing Tshisekedi the presidency, Kabila would agree to surrender the title but would not cede power to the opposition. (Kabila has even announced that he intends to continue living in the presidential palace, demoting the new president to the prime minister’s residence.) The promotion of an opposition candidate to the presidency—albeit through vote rigging —is also likely to divide the opposition, mute the outrage of the Catholic Church and international community, and weaken the legitimacy of Tshisekedi himself.

Tshisekedi cannot even take his own confirmation for granted—some in the ruling party have hinted that they might appeal the election results with the Constitutional Court, and Fayulu’s party announced it will do so. Tshisekedi is vulnerable on several counts: he did not fairly win the elections and more careful inspection of the data could further weaken the legitimacy of his victory. Belgian media also appear to have confirmed that Tshisekedi’s college diploma (a constitutional requirement to run for president) is a forgery. Even if Tshisekedi’s presidency survives these court challenges, he will be compromised beyond repair and reliant on Kabila, whose patronage network controls most of the country’s levers of power, including the security forces. This would be transition in name only.

Although the situation is likely to remain fluid for a while, it is already possible to draw some important lessons from these elections and use them to inform some scenarios for the future.

Kabila has once again made the best of a weak hand. But it is undoubtedly not the outcome that he wanted. He was forced to surrender to pressure. First, the Congolese street and civil society forced him into keeping the constitution. Second, the Western powers and Angola (which fears instability at its border), forced him to not to run for elections. Then Kabila himself blundered, in selecting the loyal but unelectable Shadary as his candidate. It was this combination of events that finally pushed Kabila out of the presidency, and the victory should be credited to the vibrancy of Congo’s democracy activists and to Western diplomacy.

Even if confirmed in office, it is unlikely that Tshisekedi will be able to wrest control of the state from Kabila and his patronage networks. Provincial election results show that the ruling party performed well at the legislative level and will be strongly represented in the provincial assemblies. These provincial assemblies are key levers of power—they elect the members of the Senate, which is thus very likely to end up with an FCC majority. Moreover, because former presidents are senators for life, an FCC majority could well decide to elect Kabila as Senate president, making him the country’s “number two,” in an innovative reprise of the Putin-Medvedev model.

Kabila will probably also continue to control the presidential guard, the intelligence agency, and much of the police. The rest of the military is highly fragmented, but its elites are also in patronage relations with the Kabila regime. How could Tshisekedi wrestle control of these institutions away from Kabila?  He will have no real political authority over them and fewer resources to share with them than Kabila. As a result, he is more likely to be their hostage than their commander.

That is not to say that Tshisekedi would not make some changes, on the margins. (We should expect greater civil liberties and lesser harassment of opponents, for example.) But Tshisekedi’s base in the Kasais will expect him to pursue the same patronage practices, and the dubious manner of his election will make him an unlikely purveyor of improvements in the rule of law and governance.

The distinction between regime opponents and insiders has always been fluid in Congo. Kabila and the FCC are always willing to bend agendas and cut deals with rivals to expand their coalition and their power. Tshisekedi might have different policy goals, but he practices this same kind of politics. He happily betrayed his initial alliance with Moïse Katumbi and Fayulu in pursuit of the presidency, and his new alliance with Kabila is splintering the opposition. Sadly, the “Lamuka coalition” beween Fayulu, Katumbi and Jean-Pierre Bemba is also likely to fall pray to self-interest in the months ahead. They will no doubt remain in the opposition, but many of their lesser colleagues are likely to defect to the new regime in search of plunder.

International reactions to the election results have been subdued. Some western powers have expressed concern over the accuracy of the results but others have been more circumspect.  Most have “taken note” of the results while urging all parties to follow due process. The African Union recognized that there may be issues with the “verdict of the ballot boxes,” but also called for due judicial process.

Foreign officials are rightfully rejoicing that all hell hasn’t broken lose in the Congo—so far. (They should perhaps remember that the Kenyan people did not take to the streets when questionable election results were announced in 2007, either—they took to the streets days and days later, when it became clear that the international community and Kenyan institutions didn’t plan to challenge them.) They are hamstrung by fear that challenging Tshisekedi’s victory might give Kabila an excuse for staying on. That would be the worse of two evils: but it would not justify a decision by the Western powers to legitimate an electoral fraud.

Pierre Englebert is professor of African politics at Pomona College and nonresident senior fellow at the Atlantic Council’s Africa Center. The views expressed in this article are those of the author and do not necessarily reflect the views of the Atlantic Council, its staff, or its supporters.

Image: Corneille Nangaa, president of Congo's National Independent Electoral Commission (CENI), speaks during a press conference announcing the results of the presidential election in Kinshasa, the Democratic Republic of the Congo, on January 10, 2019. (REUTERS/Jackson Njehia)