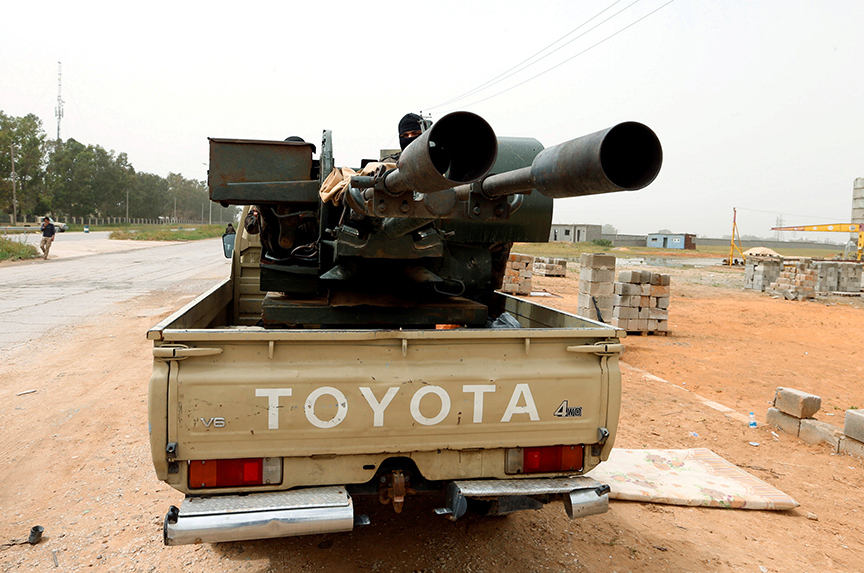 Libya, once again, is on the boil.

Khalifa Haftar, who leads the self-styled Libyan National Army (LNA) in the eastern part of the country, set off alarm bells this week when he ordered his troops to march on Tripoli where an internationally recognized government is seated. Haftar refuses to accept the legitimacy of this government, which is led by Prime Minister Fayez al-Serraj. And therein lies the problem.

Haftar’s forces control large swathes of territory in the eastern and southern parts of Libya and have steadily gained ground.

In response to Haftar’s orders to the LNA, militias in the western cities of Libya have rallied to defend Tripoli.

Karim Mezran, a senior fellow in the Atlantic Council’s Rafik Hariri Center for the  Middle East, said militias in Tripoli had, “contrary to all expectations, stuck together in favor of the legitimate government of Serraj, and have not changed sides.”

Militias from the western city of Misrata are also apparently on their way to prevent Haftar’s forces from advancing on Tripoli, while others were heading east to threaten the oil terminals in the Gulf of Sidra that are under Haftar’s control, Mezran said. Libya is a key oil-producing nation and a member of the Organization of the Petroleum Exporting Countries (OPEC).

Militias from the city of Zintan were also moving on the orders of former Libyan Defense Minister Osama al-Juwali to halt the advance of Haftar’s forces, Mezran said.

As things stood on April 5, Haftar’s forces had been stopped outside Tripoli; fighting was reported in the city of Gharyan south of Tripoli. United Nations Secretary-General António Guterres was to meet Haftar in the eastern Libyan city of Benghazi to try and defuse a situation some worry could escalate into a civil war.

“My aim remains the same: avoid a military confrontation. I reiterate that there is no military solution for the Libyan crisis, only a political one,” Guterres wrote on Twitter.

“That’s the million-dollar question,” Mezran said when asked about the timing of Haftar’s push to take Tripoli.

The latest developments put a question mark over the fate of a UN peace conference in Ghadames on the border with Algeria on April 14-16.

Mezran said he had been informed by reliable sources that Haftar had been warned by all the big actors in the region — the Emiratis, the Russians, the Egyptians, and the French — not to move on Tripoli. “There are now a lot of upset people,” he said.

Acknowledging that Haftar has “a lot of support,” Mezran predicted that his recent actions “are going to boomerang on him.”

Libya has been in a state of turmoil since its longtime leader, Moammar Gadhafi, was ousted and killed in an uprising in 2011.

The country today is divided between two rival factions — one in Tripoli where the internationally recognized and UN-backed government led by Serraj is based and the other in the east that supports Haftar.

Following Gadhafi’s death, Haftar returned to Libya after living for years in exile in the United States.

Haftar served in the Libyan army under Gadhafi and participated in the coup that brought Gadhafi to power in 1969. In the late 1980s, Haftar was captured by Chadian troops during Libya’s war with Chad. While in Chad, he turned against Gadhafi and led a Central Intelligence Agency (CIA)-backed effort to oust the then-Libyan leader. When the plot failed, Haftar went to Virginia, where he lived for two decades becoming a naturalized US citizen.

While the United States has in recent years sought to keep its distance from Haftar, he has been embraced by Europe. France, in particular, has played a critical role in Libya. In 2017, French President Emmanuel Macron brokered a meeting between Haftar and Serraj. At a meeting in Paris, Serraj and Haftar agreed to hold elections, but nothing came of that agreement.

The governments of France, Italy, the United Arab Emirates, the United Kingdom, and the United States on April 4 put out a joint statement to say they were “deeply concerned by fighting near Gharyan” and “urge all parties to immediately de-escalate tensions, which are hindering prospects for UN political mediation.”

“At this sensitive moment in Libya’s transition, military posturing and threats of unilateral action only risk propelling Libya back toward chaos,” the statement said. “We strongly believe that there is no military solution to the Libya conflict. Our governments oppose any military action in Libya and will hold accountable any Libyan faction that precipitates further civil conflict.”

The countries expressed firm support for UN Special Representative of the Secretary-General (SRSG) Ghassan Salame “as the UN seeks to break Libya’s political deadlock, improve transitional governance, and chart a path toward credible and peaceful elections.”

“All Libyan actors should work constructively with SRSG Salame as the UN finalizes plans for the national conference planned for April 14-16,” the statement added.

Mezran said that while there are some in the US administration who are sympathetic to the idea of a strongman leading Libya, the State Department and the National Security Council do not share this view and have so far prevailed in shaping the Trump administration’s approach to Libya.

The United States should continue to “stand by Serraj’s internationally recognized government and prevent any kind of military adventure by Haftar,” said Mezran.

“The United States should stick to the plan of having a modern and pluralistic country and defend the peace process,” Mezran said. “There should be no wavering whatsoever.”

Image: A military vehicle carrying forces from the Libyan city of Misrata is seen on the road in Wadi al Rabih south of Tripoli on April 5. (Reuters/Isamil Zitouny)