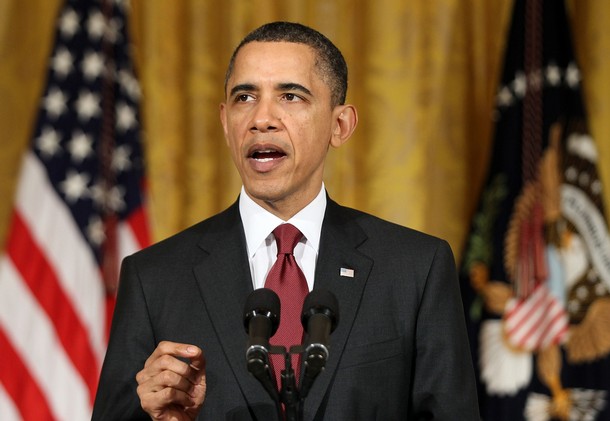 We’ll see, within days or perhaps even hours, what it is that the United States and its allies actually plan to do to enforce UN Security Council Resolution 1973, but there are already strong indications of what the intended policy is.

Dave Schuler correctly notes that the Security Council Resolution on Libya "authorizes member states to act as required to prevent harm to Libyan civilians, authorizes the establishment of a no-fly zone in Libyan air space, strengthens the arms embargo against Libya, and strengthens the freeze on Libyan assets in foreign banks. It does not authorize member states to support rebels, defend armed insurgent groups, remove Qaddafi from office, or take steps to prevent Qaddafi’s use of mercenaries."

Further, he points out, "militias armed with automatic weapons and rocket launchers" are not "civilians" under the laws of war.

Foreign Policy‘s Josh Rogin, whose reporting on this issue has been invaluable, takes us inside President Obama’s briefing of Congress.

Deputy National Security Advisor Denis McDonough held a conference call with top Congressional staffers on Friday afternoon where he emphasized Obama’s "deep respect for Congress in all of these matters," and gave a read out of the White House meeting. A recording of the call was provided to The Cable.

"The president expects the preponderance of our involvement to last a matter of days, not weeks," McDonough said. "At the front end of this effort, the United States will contribute our unique capabilities to neutralize air defenses and military equipment that threatens civilians and civilian-populated areas to enable ongoing enforcement operations led by our partners," he said. "We will then enable and support other countries to enforce the no-fly zone…with us in a support role…. It will not be an open ended effort by the United States."

NATO, which is organizing command and control of the no-fly zone, enforcement of the arms embargo, and humanitarian assistance operations, could finished their planning as early as today, McDonough said. He also confirmed that in addition to the no-fly zone and the "no-drive zone," planning is ongoing for a "no-sail zone," which would allow greater enforcement of the arms embargo authorized by the new U.N. resolution.

In an exclusive interview with The Cable, Berman, the top Democrat on the House Foreign Affairs Committee, said Obama emphasized in the meeting that the United States would not shoulder the lion’s share of responsibility for conducting and resourcing the mission. "While the U.S. will provide support and leadership in terms of implementing capabilities which it’s uniquely able to provide, the general operation is going to be much more Arab and European led," Berman said, adding that he called into the meeting from Los Angeles.

But if regime change is  the goal, than the tactics will ultimately have to shift to achieve it. Presumably, the hope is that the threat of international force, or limited application of same, will be sufficient to tip the balance of power back to the rebels. But what if it isn’t?

Daniel Dombey and Peter Spiegel of the FT warn that "Western military planners have been worrying for weeks about the unwelcome consequences of military intervention in Libya, including a stalemate that could last for years and a distraction from problems elsewhere."

“There was this premature triumphalism about the passage of the UN resolution but what is the plan for dealing with this entity called Libya?” says Brian Katulis at the Center for American Progress, a Washington-based think-tank. “You could have this very awkward phase emerging where Gaddafi is entrenched while there’s a rump state in eastern Libya and some but not all states in the Arab world work to isolate the regime.”

Despite the growing international support for the mission, senior military officials remain worried that policymakers – in their rush to stop Colonel Gaddafi – have not fully thought out the campaign’s endgame.

While at present top officials say there is no need to assume either escalation or a protracted engagement, the language of the UN resolution on all necessary measures short of ground forces could cover a wide range of actions and increasing outside involvement. “The mandate is much broader and stiffer than many people expected,” says Paul Kennedy, author of a well-known history of the UN. But the US is already war weary, according to opinion polls and votes in Congress and its European allies even more so.

“Assume the effort is wildly successful. Now what? Separation of forces and a no-fly zone forever?” asked a senior US military official involved in the operation’s planning. “No one wants that, nor can we or our friends afford that.”

Such a stalemate could be consolidated by a ceasefire, even if the one announced by the Libyan government on Friday proved short-lived or illusory.

“Gaddafi could get a stalemate and hope that over time the attention of the international community will wane,” says Eric Edelman, undersecretary of defence in George W. Bush’s administration, who supports military action. “In the meantime we have similar problems to what we had in the Balkans. How many ceasefires did we have then? What about paramilitary forces Gaddafi says he can’t control?”

The Somalia debacle of the early 1990s  introduced a new term into the military lexicon: mission creep. Apparently coined by the Washington Post‘s Jim Hoagland, it referred to the natural tendency of limited engagements to expand beyond their original scope simply because of the involvement of our forces. Once there, it becomes exceedingly difficult not to react to injustices and real problems on the ground.

We can hope that Gaddafi stands down before the international community gets involved or that things quickly resolve themselves after a few sorties. But hope is not a strategy. It’s anyone’s guess as to what happens if limited action doesn’t work. Mine is that the action will become less limited until Gaddafi is gone.