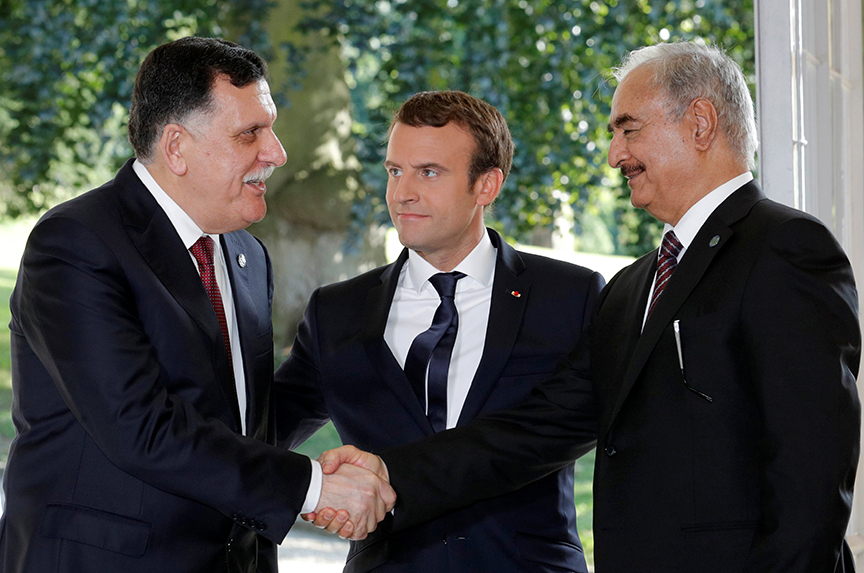 Diplomatic efforts aimed at ending the chaos that has prevailed in Libya since 2011 have legitimized Khalifa Haftar, a former Libyan general whose forces have been accused of torture and executing prisoners, according to the Atlantic Council’s Karim Mezran.

Haftar met Fayez-al-Serraj, the prime minister in Libya’s United Nations-backed government, in Paris on July 25. The fact that this meeting occurred in the first place was a recognition of the reality that Serraj’s government—the Government of National Accord (GNA)—has been unable to unite the country and that Haftar has an indispensable role in any solution to the crisis, said Mezran, a resident senior fellow in the Atlantic Council’s Rafik Hariri Center for the Middle East.

“Haftar is the big victor,” he added.

Haftar refuses to accept the legitimacy of Serraj’s internationally-recognized government. His forces control large swathes of territory in the eastern part of Libya and have steadily gained ground. In June, Haftar’s forces, backed by the United Arab Emirates and Egypt, claimed victory over armed rivals in the battle for the eastern city of Benghazi.

While he described the meeting as a “good first step,” Mezran noted that it had “the appearance of Haftar being imposed on Serraj.”

The Serraj-Haftar summit in Paris produced the promise of a ceasefire and early elections, however, a date was not set.

This was the second time in the past three months that Serraj and Haftar have met. They previously held talks in Abu Dhabi in May, but failed to reach an agreement.

In a joint communique released after the Paris meeting, Serraj and Haftar said: “We commit to a ceasefire and to refrain from any use of armed force for any purpose that does not strictly constitute counterterrorism.”

Mezran said the ceasefire agreement is curious because there have been few direct confrontations between Haftar’s forces and militias loyal to Serraj’s government. Serraj has no real army to command.

Will the ceasefire hold?

“Will the Misratis listen to what Serraj says? That is a big question,” said Mezran, referring to militias from the western city of Misrata that support Serraj.

Another big question is whether the House of Representatives (HoR) in the eastern city of Tobruk, which is a rival power center to Serraj’s government, will accept the agreement. This, however, may be less of a problem.

“The big question is how serious are the two interlocutors about working together and will that be enough to unite the various factions in Libya,” said Mezran.

“If the agreement is solid and both the actors [Serraj and Haftar] decide to go ahead with the roadmap that they have drafted then the HoR will be on board,” Mezran predicted.

This would be good news for Libya.

Libya’s longtime ruler, Moammar Gadhafi, was one of the casualties of the Arab Spring uprisings that erupted across the Middle East and North Africa in 2011. Gadhafi was ousted and killed by rebels in February of 2011.

Ever since, Libya has been embroiled in chaos marked by rival power centers, warring militias, and a human trafficking epidemic that has taken root, posing a challenge to governments and communities across Europe and North America.

Q: Is the meeting in Paris a recognition that Serraj has failed to unite the country and an acknowledgement of Haftar as a legitimate power center in Libya?

Mezran: It is a de facto recognition of the fact that the UN-backed government of Serraj is not in in full control. This is due, in part, because of the rejection of mediation by eastern forces under Haftar’s control and the tepid support for such a process by the House of Representatives to the Libyan Political Agreement. [Editor’s note: The Libyan Political Agreement, also known as the Skhirat Agreement after the Moroccan city where it was signed in December of 2015, sought to form a national unity government.]

It is also a very important recognition of Haftar’s prominent role by a major European power that has so far officially endorsed the Serraj government, even though French special forces have been supporting Haftar behind the scenes.

Haftar is the big victor because he was earlier ostracized.

Q: Does the HoR support the development in Paris?

Mezran: The speaker of the HoR [Aqilah Saleh] has expressed a negative opinion of the agreement.

Q: How important is it to have the HoR on board?

Mezran: It would be a plus to have them on board. If the agreement is solid and both the actors [Serraj and Haftar] decide to go ahead with the roadmap that they have drafted then the HoR will be on board.

The big question is how serious are the two interlocutors about working together and will that be enough to unite the various factions in Libya? The agreement is a good first step forward, but it doesn’t have the appearance of a negotiation. It has the appearance of Haftar being imposed on Serraj.

Q: Can this ceasefire work? Does Serraj have the ability to persuade the militias, especially those from Misrata, to lay down their weapons?

Mezran: The whole ceasefire issue raises questions because there are no direct confrontations between [the Serraj government’s] forces and Haftar, except when it comes to the Misratis [who support Serraj’s government].  Will the Misratis listen to what Serraj says? That is a big question.

Q: While Serraj and Haftar agreed to hold elections they did not come up with a date. Is that a concern?

Mezran: To me, calling for elections is preposterous because it sets a goal that is unrealizable.