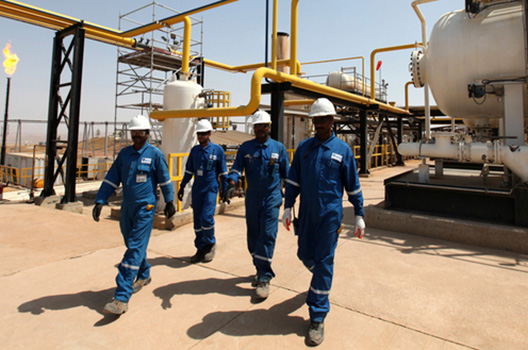 The deal
The harmony between the messages of federal Iraqi Oil Minister Adil Abdul-Mahdi and the Iraqi Kurdistan Regional Government’s Natural Resources Minister Ashti Hawrami was striking at a panel at the Atlantic Council’s annual Energy and Economic Summit in Istanbul this November. This new tone in Arab -Kurdish relations within Iraq was showcased by the deal between Baghdad and Erbil on December 3 that appeared to resolve a large chunk of their long-standing dispute over the management of tax revenues and hydrocarbon exports.

The agreement – if implemented – is of great significance. Maintaining and increasing Iraqi oil production and exports is of critical importance for global markets: the International Energy Agency forecasts that half of the world’s increased oil demand by 2020 will be supplied by this wartorn country.

Earlier this year, Iraq was on the brink of collapse in the wake of ISIS’ crushing defeat of the Iraqi army and the mounting sectarian violence throughout the country. The Kurdistan region has been edging closer toward the exit from the Iraqi state in response to Baghdad’s intransigence on any number of issues, including revenue sharing and oil exports. This standoff between Erbil and Baghdad seriously hampered the fight against ISIS and threatened the unity of Iraq as a whole.

Under the agreement, Erbil will finally receive its 17 percent allocated share of the national budget and an additional $1 billion will be transferred from Baghdad to the KRG in installments to finance the Kurdish Peshmerga fighters. The deal stipulates that the Kurds put 550,000 barrels of oil a day under the control of the central authorities (Iraq’s Oil Marketing Company, SOMO). Three hundred thousand barrels come from the oil fields around Kirkuk, whose production is largely stranded after their seizure by Peshmerga forces in the wake of the Iraqi Army’s collapse in June. The remaining 250,000 barrels originate from oil fields within the Kurdistan Region itself. The KRG has been exporting oil through a new pipeline to the Turkish port of Ceyhan, but has yet to actually sell its oil as buyers were concerned about the threat of Iraqi legal actions.

Under the deal, SOMO would keep its monopoly over oil exports, while Baghdad for the first time implicitly acknowledged the validity of the production sharing agreements oil companies concluded with the KRG.

A Breakthrough?
Baghdad and Erbil have been unable to hold on to any agreement they reached on revenue sharing and oil exports since 2006. Shall we expect this one to last?

While much caution is warranted, there is ground for some optimism. As English writer Samuel Johnson’s famously said: “the prospect of being hanged in a fortnight concentrates the mind wonderfully.”

The existential threat of ISIS in Iraq has acted as a catalyst to halt the disintegration of Iraq and resolve some of the long-simmering disputes. The realization of the clear and present danger represented by ISIS to both Kurds and Arabs and the mounting international pressure to cooperate may preserve the more compliant mood on both sides for some time to come.

The new Iraqi government led by Prime Minister al-Abadi proved to be much more inclusive in its approach and policies than its highly divisive predecessor, Nouri al-Maliki. Baghdad had to confront the fact that the Iraqi Army largely fell apart and the Kurds are doing the bulk of the fighting against ISIS. Therefore Baghdad needed to ensure that the KRG prevails financially and militarily. In turn, Erbil had to face its own vulnerabilities that intertwine its fate with that of the rest of Iraq. The KRG needs Iraqi air force support and heavy weapons supplies from the international community that are channeled in via Baghdad. The Kurds have thus agreed to join the new federal government in Baghdad back in August, under the condition that an agreement on the revenue and hydrocarbon issues will be reached.

The deal will by no means represent the end of disputes between Baghdad and Erbil. If past history is any guidance it may very well fall apart: the trust between the parties is still very low. It does not cover production above the 300,000 level from Kirkuk that could provoke further disputes. Prime Minister al-Abadi and Oil Minister Abdul-Mahdi may have to fight back against their more sectarian colleagues in the Iraqi central government who previously have prevented accommodation with Erbil. The KRG will continue to leverage its frontline role in the conflict with ISIS and its entrenchment in the disputed territories and to fight for its rights to export oil (and gas) independently, as Baghdad considers this to be out of question partly in fear of similar requests from other major producing regions like Basra. The KRG is unlikely to withdraw from Kirkuk and Baghdad will likely remain adamant in its opposition to proceed with the constitutionally mandated referendum on its status.

Nonetheless, the deal will allow some breathing space amidst the war against ISIS and for continued negotiations on the many outstanding issues and uncertainties surrounding Iraq’s future. It is widely viewed as boosting Iraq’s unity in the war against ISIS, as well as the KRG’s ability to fight, while it lessens the chances for any Kurdish declaration of independence, at least in the near future. As such, the deal is a potential milestone and win for all Iraqis — and is tremendously important for the region, Europe, and the US.