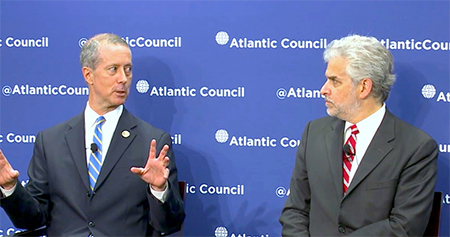 Mac Thornberry, the new Chairman of the US House Armed Services Committee, accused President Barack Obama on June 23 of “holding hostage” the nation’s security by threatening to veto the annual defense appropriations bill, which passed the Senate on June 18 by seventy-one to twenty-five with “overwhelming bipartisan support.”

Thornberry (R-TX), said the $612 billion authorization bill has more than enough backing to override a presidential veto, but that with Russian troops in Ukraine and radical Islamic terrorists running amok in Iraq and Syria, now is hardly the time for “political hysteria” in the halls of Congress.

“In next year’s budget, both the House and Senate have passed budget resolutions allocating as much money for defense as the President requested,” said the lawmaker, addressing the Atlantic Council’s Brent Scowcroft Center on International Security. “This is the lower ragged edge of what’s needed to defend the country, yet the President has threatened to veto it unless he gets more money for domestic programs such as the IRS and the EPA [Enviornmental Protection Agency]. It really makes no sense.”

He continued: “We need higher, predictable, consistent funding, but holding defense spending hostage for the EPA doesn’t make our country safer. The fact is, defense has been cut 21 percent over the last four years. I hate to tell you, but the world is not 21 percent safer than it was four years ago.”

Since 1995, Thornberry has represented the thirteenth Congressional District, which covers 40,000 square miles of the Texas panhandle and is geographically one of the nation’s largest congressional districts. In January, he took over the helm of the House Armed Services Committee, becoming the first Texan of either party ever to hold that position.

“Most of us who grew up during the Cold War knew that our country was threatened by an entity that would only find security in the total destruction of its rivals,” said Thornberry. “After the Soviet Union collapsed, we thought that without the ideology of communism, Russia would enter into the community of nations. But we’ve been disappointed, and perhaps we underestimated something in the Russian psyche.”

Despite all the warning signs, Thornberry said, the Obama Administration opted for a “reset” with the Kremlin, and concluded that Russia’s 2008 war with Georgia was no longer an obstacle to better relations between Washington and Moscow.

“We began cutting our defense budget, and the [Russian] government annexed Crimea, then occupied parts of Ukraine, in the most significant breach of Europe’s borders since the end of World War II,” he lamented. “So far, the administration and some of our European allies have refused to provide the Ukrainians with the lethal assistance they’ve asked for to defend themselves.”

And while Congress keeps slashing the Pentagon’s budget, the Russians are boosting their own defense spending by ten percent a year, “modernizing ICBMs, building new long-range cruise missiles and continuing to crank out new nuclear warheads” while maintaining a tactical advantage over its adversaries.

“We’ve seen these aggressive actions with planes and ships that we never saw during the Cold War. In addition, they are launching massive and relentless misinformation campaigns, not only internally but also in neighboring countries. On the political front, Russia helps finance Green Party protests and anti-fracking movements,” he said.

“So the next President will face a situation in which the one country that could pose an existential threat to the United States is growing in military capability,” Thornberry warned. “The 535 members of Congress are not going to devise a national security strategy, but what we can do is help clarify thinking, enlighten public opinion, and ensure that the next President has all the tools he or she needs in order to protect our country and our interests around the world.”

To do that, Thornberry outlined five elements he said should shape US defense policy for the future: Speak the truth, strengthen defenses, improve agility, stand strong with allies, and use all instruments of power available.

“Historic changes after World War II came about because Kennan, Churchill and others were willing to speak the truth. Americans and others need to know the facts about Russian involvement in Ukraine,” he said. “We also tend to undervalue the battle of ideas, whether it’s the struggle against radical Islam or Russian aggression in Europe. We need the political will to fight on that battlefield, and we are not doing very well.”

He added that the Pentagon must spend its resources wisely and more efficiently, while constantly improving the agility of its systems in order to maintain technological superiority over US adversaries.

“Rigidity is our enemy, whether it’s in bureaucratic organizations or procurement systems or political decision-making,” he said. “This year, we are focused on acquisition reform, reducing overhead and on personnel reform. It’s a start, but we all have to put our heads together to ensure that our defense systems are as agile as they need to be.”

The House Armed Services Committee chief also urged US allies around the world to “pull their share of the weight”—whether they’re in Europe, Asia or the Middle Est.

“Only four NATO allies are currently meeting their commitment of spending 2 percent of GDP on defense,” he complained. “This is not only unfair, but probably seen by Moscow as further evidence of mush. The US has to lead by example and stop the decline in our own budgets, but we have to demand that our allies meet the targets as well.”

Responding to a question by the event’s moderator, Barry Pavel, on how the Pentagon can maintain a vital strategic deterrent in the face of declining budgets, Thornberry warned that Russian President Vladimir Putin is putting greater emphasis on nuclear weapons, even as US weapons and delivery systems fall into disrepair.

“Our nuclear deterrent has been so safe and reliable that we have come to take it for granted. But those people who have made it possible are retiring,” he said. “It is not as desirable an area for scientists to go into as it once was. We have lost engineers to go work in the energy industry. I still worry that we are asking labs to do the impossible: keep complex machines running at peak condition forever.”

Another questioner asked Thornberry if he was afraid that US weapons destined for Ukraine would end up in the hands of ultranationalists.

“They would go to the duly elected government of Ukraine and be used to help defend against this invasion of their territory, which includes Russian troops,” he replied. “The government of Ukraine has to calibrate their policies in the east, and they have talked about greater autonomy for those regions. But the government ought to be able to protect its territorial integrity against those who have committed this aggression.”

The Texas Republican added: “We stand with allies and we resist aggression. Our actions ought to be consistent with our words. But when you say things and don’t follow them up with actions, you end up with red lines in Syria.”