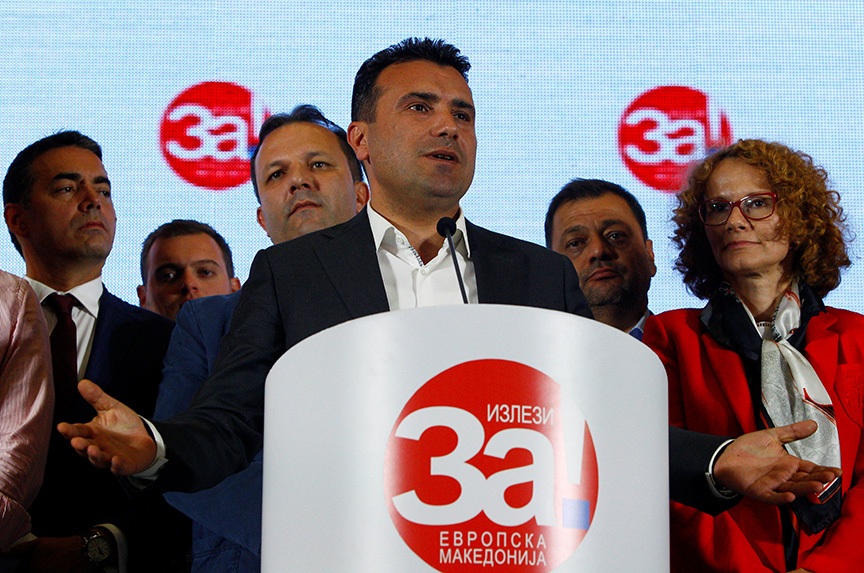 Macedonia's PM Zoran Zaev gives a speach during a referendum night on changing Macedonia's name that would open the way for it to join NATO and the European Union in Skopje, Macedonia September 30, 2018. (REUTERS/Ognen Teofilovski)

Low turnout in a referendum on a name deal in Macedonia has complicated that country’s prospects for joining NATO and the European Union (EU).

Macedonians that did vote in the September 30 referendum overwhelmingly supported the name deal between their country and Greece. However, the referendum was consultative and non-binding, as the deal can only be ratified with a constitutional majority in the Macedonian parliament. The low turnout (around 37%) could embolden opponents of the deal to block passage once it comes for a vote in parliament. Macedonian Prime Minister Zoran Zaev has said he will call an early election if he fails to gain the support for the deal that he needs in parliament. Even if the deal passes in the Macedonian parliament, it will need to be approved by the Greek parliament, where it faces stiff opposition. The name deal, which was reached between Zaev and Greek Prime Minister Alexis Tsipras in June, seeks to end a twenty-seven-year dispute over Macedonia’s name. Under the deal, Macedonia’s name would change to the Republic of North Macedonia, alleviating Greek suspicions about Skopje’s designs on Greece’s own Macedonia province and potentially clearing the way for Skopje’s accession to NATO and the EU. In July, NATO formally invited Macedonia to begin accession talks to join the Western military alliance pending approval of the name deal.

While the turnout in the referendum was “lower than many in the government had hoped,” the overwhelming support for yes among those who did vote—almost 90 percent—was higher than expected, said Damon Wilson, executive vice president of the Atlantic Council. “That outcome complicates the task but nonetheless gives Zaev a strong enough case to make the case to parliament that the overwhelming majority of citizens support a European Macedonia,” argues Wilson.

In a conference call hosted by the Atlantic Council on October 1, Wilson explained that getting sufficient turnout “was always going to be a tough slog” for the Macedonian government, as the desired 50% “would require 900,000 voters… and it is not clear how many of those are outside of the country.”

There was also a coordinated boycott campaign which was officially anonymous but extremely well-organized, Wilson said. The Internal Macedonian Revolutionary Organization (VMRO-DPMNE), the main opposition party in Macedonia, did not officially campaign for a boycott, but many anti-deal proponents “seem to have drawn on the infrastructure of the VMRO apparatus,” according to Wilson. The current president of Macedonia and VMRO member, Gjorge Ivanov, refused to sign the name deal in June and openly opposes its ratification.

According to Evelyn Farkas, a nonresident senior fellow at the Atlantic Council, VMRO’s opposition is more of a “sour grapes moment” than actual disapproval of the deal itself. “They were not the ones to reach an agreement with Greece, therefore this agreement is not good enough for them,” she said.

Alain Le Roy, a French diplomat who served as the EU’s special representative in Skopje from 2001-2002 and is the French government’s special envoy on Macedonia, noted that Macedonia remains “a very polarized country,” causing “many voters from the opposition [to find it] difficult to vote yes, because it would be a vote in favor of the government.” Le Roy also noted low turnout among Macedonia’s Albanian population, which was curious given the known support NATO and EU membership has in that community. Le Roy, who visited Macedonia in August on behalf of President Macron, underscored that France is prepared to back Macedonia’s European aspirations, significant given the Elysee’s overall ambivalence toward further enlargement.

Farkas pointed to the potential impact of Russian influence in the boycott campaign, as Moscow strongly opposes NATO expansion into the Balkans. Greece recently expelled four Russian operatives for attempting to foment anti-deal opinion in Greece and “Russians were probably funding some of the boycott efforts” in Macedonia, Farkas claimed.

While the Atlantic Council’s Digital Forensic Research Lab had identified instances of likely Kremlin-backed disinformation in Macedonian social media, Wilson noted that there was much more “traditional presence of foreign influence on the ground,” such as funding of campaigns and Russian financial influence, than online. He also cautioned that the result is not “a case where you can just point to a Russian bogeyman and say that it is a result of Russian efforts.”

In order to pass the deal in parliament, Zaev and his Social Democratic Union party (SDSM) will need to peel off about ten votes from VMRO members of parliament (MPs), Wilson explained.  While before the referendum, “it was pretty clear that those ten votes were gettable,” Wilson said, there is now the possibility that “VMRO will have a stronger discipline among its caucus.”

While the low turnout may appear to be a setback, Wilson noted that the more than 600,000 voters who approved the deal represent a huge mandate for Zaev. “In Macedonia’s electoral history, the only time more than 600,000 people voted in favor of anything was the independence referendum in [1991],” Wilson said. Zaev has already declared his intention to call an early election if the deal fails to pass parliament and the fear of losing a seat could flip some VMRO MPs over to supporting the deal, Wilson argued.

Should the deal pass the Macedonian parliament—and similarly be approved in Greece—Macedonia would quickly start on the path to full NATO membership and a decision on EU accession talks could be made in June 2019, Le Roy explained. The ambiguity of the September 30 vote has, however, “pushed back the timeline,” according to Wilson, and could be threatened by new Greek elections next year.

For Macedonia’s future Western aspirations, “there is no alternative” to the name deal, according to Wilson. “If Macedonia wants to be in NATO and the European Union, it by definition must come to an agreement with its neighbor Greece,” Wilson said.

According to Wilson, the question becomes whether Macedonian politicians will “come together in the interest of their country across political divides” or squander this historic opportunity.