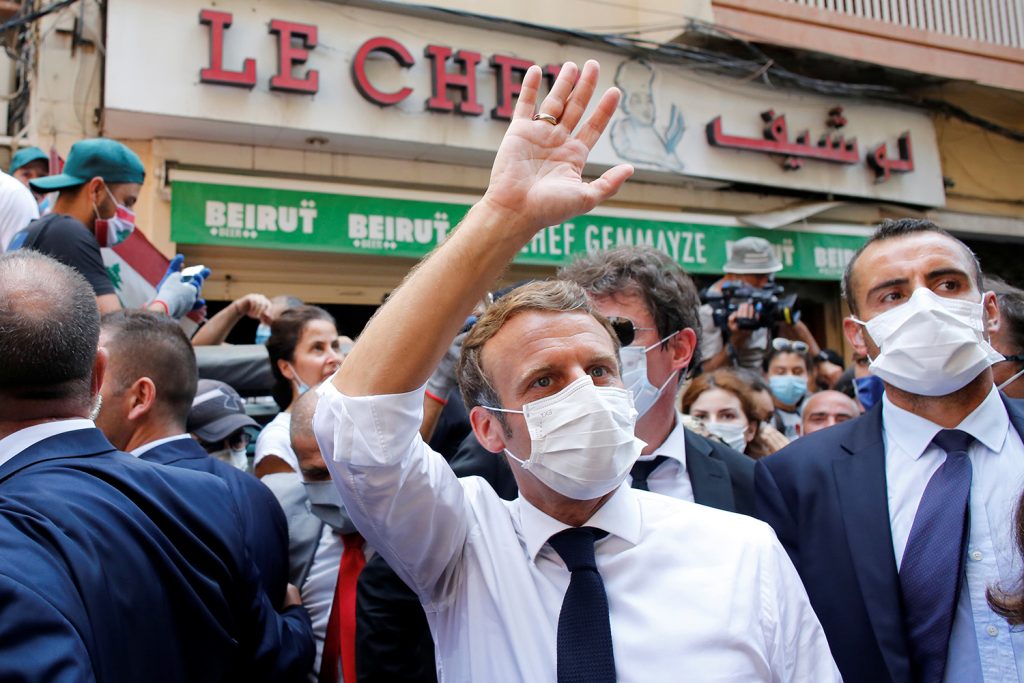 Critics accuse him of “grandstanding,” but there is no sign of insincerity in the leadership role Emmanuel Macron assumed last week in Lebanon. On August 7, the French president was cheered in the streets as he toured the wreckage of a Beirut port explosion which maimed thousands of people less than two days before. On August 9, Macron lobbied world leaders to expedite emergency relief to Lebanon and promised “no blank checks,” vowing to condition aid on a “new political order” in place of a “system that no longer has the trust of its people.”

But Macron has more leverage over that system than he let on. Brussels currently grants significant operational rights within the European Union to Hezbollah, the terror group with a dominant position in Lebanese politics and, reportedly, at the port where almost 3,000 metric tons of ammonium nitrate sat unsecured. The EU’s policy is in large part a reflection of French preferences. If it chose to, Paris could likely lead a change to it overnight.

Last year, for instance, the United States tried to persuade Germany to sidestep EU policy and pass a national ban on Hezbollah. At first, Berlin’s caginess was hard for many of us involved in the effort to grasp. The Ministry of Interior had legal authority to ban the terrorist organization’s political and social activities in Germany. A recent domestic intelligence report had documented the group’s planning and fundraising activities on German soil. Hezbollah leaders touted their role in the Syrian genocide, whose migratory consequences continued to rock German politics, and remained outspokenly dedicated to the extermination of Israel, whose existence Berlin deems inviolable. With virtually no German constituency supportive of the Iranian terror proxy, there was no reason to fear an electoral backlash. The intensity of Berlin’s resistance to a domestic ban of Hezbollah did not seem to add up.

In Brussels, results were similar. The EU maintains a distinction between Hezbollah’s “political wing” and “military wing,” an organizational division Hezbollah itself does not recognize. Brussels argues the separation enables full diplomatic access to the Lebanese government. But when US officials stressed Lebanon’s robust ties with Britain, the Netherlands, Japan, Canada, and the United States, all of which recognize the entirety of Hezbollah as a terrorist organization, EU officials often conceded the point in private: The artificial distinction is not made entirely for the sake of relations with Beirut.

The United States eventually came to appreciate that Germany was not so concerned with sidestepping the EU, and Brussels was less wedded to the status quo than it first appeared. What both Berlin and Brussels were really avoiding was a possible row with Paris. The road to banning Hezbollah in Europe, we were told, runs through the Élysée.

France has long tipped EU policy in favor of open access to all parties in Lebanon, including Hezbollah, which retains seats in both the parliament and cabinet. The French are by no means indifferent to Hezbollah’s four-decade history of global terror attacks, its complicity in the Syrian massacre, or its contributions to violence, poverty, and unemployment in Lebanon. But neither does Paris wish to be excluded from the key centers of power governing its former protectorate, where Hezbollah plays a decisive role. And no EU member advocates more strongly for the terms of its relations with Lebanon than France.

That makes sense, as France is bound more closely to Lebanon than any other European power. Five centuries ago, France successfully negotiated with the Ottoman Empire for “capitulations,” consular protections for Christians in the Levant. French schools and Catholic missions populated the area over the course of hundreds of years. By the time of the French mandate after World War One, Lebanon was firmly part of the “Francophonie,” and hundreds of thousands of Lebanese immigrated to France. Today there are thousands of dual nationals, and France is one of Lebanon’s key trading partners. In 2005, when Lebanese Prime Minister Rafik al-Hariri was assassinated (by Hezbollah, it is widely believed), French President Jacques Chirac was the only Western leader to attend the funeral.

Given the mixed but in many ways positive history of cross-cultural engagement, the French demand for uninterrupted channels to all parts of Lebanese governance appears reasonable. If that requires the pretext of a division between Hezbollah’s political and military “wings,” a frank admission may go, so be it.

But France’s insistence on Hezbollah’s rights within the EU has not been without consequences. Between 2007-2014, Hezbollah raised millions of euros for orphans in Lebanon, then siphoned the money to militia recruitment and materiel instead. In 2015, Britain and Cyprus disrupted multiple Hezbollah terror plots, confiscating several tons of first-aid cold packs stockpiled to extract the explosive precursor contained inside: ammonium nitrate.

In 2016, the US Drug Enforcement Administration cooperated with law enforcement in France, Germany, Italy, and Belgium to arrest Hezbollah affiliates operating a money laundering network throughout Europe. The EU’s own 2019 Terrorism Situation and Trend Report pointed to hundreds of millions of dollars in Hezbollah financing per year originating in or transiting Europe through international criminal networks and transnational laundering schemes. All the while, Hezbollah has made no attempt to conceal its contributions to the bloodshed in Aleppo, its patronage from Iran, or its genocidal aspirations for Israel.

At the end of 2019, in a move that surprised both Washington and Brussels, the Bundestag at last called for a national ban of Hezbollah in Germany. Five months later, the Ministry of Interior implemented it. In both cases, the German government justified its decision not only with reference to domestic security concerns, but to Germany’s special responsibility to Israel.

For Lebanon, the only way out is either revolution or reform

The ingredients for Lebanese reform are there. However, it remains a cause that awaits the right champion.

Scenes from a broken Beirut

My apartment was heavily damaged by the explosion. All the windows were gone, the frames blasted out, even on the other side of the building from the explosion. I spoke to friends and colleagues in the area. They all have tales about calamities, material and personal, that have befallen them.