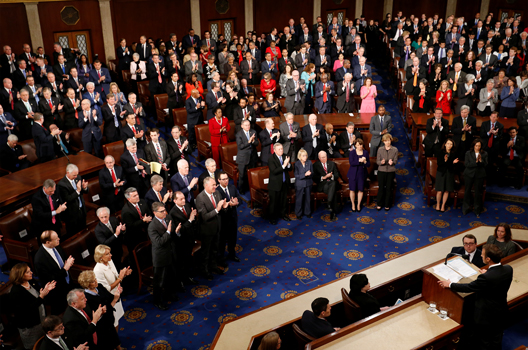 French President Emmanuel Macron addresses a joint meeting of the U.S. Congress in the House chamber of the US Capitol in Washington, US, April 25, 2018. (REUTERS/Jonathan Ernst)

French President Emmanuel Macron’s visit to Washington has been replete with pre-planned symbolism, well-orchestrated photo ops, and abundant re-affirmations of the bonds between France and the United States. In terms of substance, however, Macron saved his best for last, calling on US President Donald J. Trump to step up to the plate and act on climate change.

In a long, rousing speech before a joint meeting of US Congress, Macron touched on a wide variety of issues, and consistently underscored the need for the United States to have an active role in creating a “new breed of multilateralism” fit for modern challenges.

In one of the more emotional sections of his speech, Macron testified to the critical, existential nature of climate change, and implored the United States to overcome its divisions to face the challenge, hand in hand with allies and the global community, just as it has done in the face of other existential challenges in the past. Macron’s choice of words when discussing this topic, and the broader context behind them, is worth further consideration:

“I believe in building a better future for our children, which requires offering them a planet that is still habitable in twenty-five years… Let us face it: there is no Planet B.”

Throughout the speech, Macron sought to rise above political divisions on climate change, casting the issue as a generational, rather than partisan, challenge. Although a much higher percentage of French foreign policy experts consider climate change a major national security threat than their US peers, in both Europe and the United States there appears to be far broader support for climate action among younger generations than older generations. This provides at least some structural backing for the idea that as younger generations of leaders assume the helm of the US political system, climate leadership will become an increasingly bipartisan focus.

“Let us work together in order to make our planet great again and create new jobs and new opportunities while safeguarding our earth.”

Using a play on Trump’s memorable campaign pledge to “make America great again,” Macron again invoked a line he has used since Trump announced in June 2017 his intention to eventually withdraw from, or renegotiate, the Paris Agreement. Trump followed through on his words in December 2017, pulling the United States out of the deal. In his speech, delivered before a Republican audience, Macron put jobs and environmental stewardship in the same sentence, and challenged the notion that they are in opposition.

Macron, though disappointed by Trump’s earlier Paris decision, has also paradoxically been one of its largest political beneficiaries, seizing the symbolic climate leadership position vacated by the United States. Climate has offered Macron a relatively low-cost, popular, way to raise his profile as an international player, early on in his presidency.

“On this issue [climate], it may happen we have disagreements between the United States and France. It may happen, like in all families. But that’s, for me, a short-term disagreement. In the long run, we will have to face the same realities, and we’re just citizens of the same planet.”

Macron balanced his admonitions with the acknowledgement of differing opinions on climate action, and of the divergences between the Trump administration and the rest of the world when it comes to the Paris Agreement. Unlike many European leaders, however, he chose to focus on the long run, extending an olive branch of sorts that centrist Republicans, and perhaps even the Trump administration, could seize in due time.

“I’m sure, one day, the United States will come back and join the Paris agreement. And I’m sure we can work together to fulfill with you the ambitions of the global compact on the environment.”

Despite Trump’s announcement last year, the earliest the United States could officially notify the United Nations (UN) of its intention to withdraw from the Paris Agreement is late 2019, followed by a mandatory year-long process. At the earliest, official US withdrawal from Paris could not take place until late 2020. There are likely to be many more twists and turns in coming years as the rest of the world waits for further clarity from Trump on just how we would like to renegotiate US participation in what is already a non-binding Paris Agreement.

Many officials within the Trump administration privately hold out hope that the politics of climate in the Republican party will evolve enough to allow for the United States to announce it will remain an active part of the Paris Agreement as a major, unexpected deliverable during its hosting of the G7 in 2020. As long as this possibility exists, it also gives the ambitious President Macron a tantalizing goal for which he can put to work his charisma, energy and quite unique personal relationship with President Trump.

The drama over the US role in global climate governance is hardly over, and there are many acts to come. With his visit to Washington this week, capped off by a historic speech before Congress, Macron has clearly signaled that he too, wishes to play a leading role.

David Livingston is deputy director of the Atlantic Council’s Global Energy Center. You can follow him on Twitter @DLatAC.