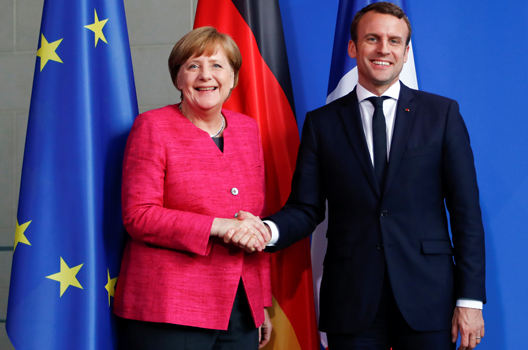 The election of Emmanuel Macron as France’s president on May 7 is a welcome boost for “third way” politics, a centrist political philosophy that broadly advocates a combination of right-wing economic and left-wing social policies. For the first time since the 1970s, France has elected a president that does not belong to either of the two major parties. In doing so, they chose a pragmatic vision for the future.

With the European Union’s (EU) existence under threat after years of underachievement and a morale-sapping Brexit referendum, the renewed impetus brought about by the election of the profoundly pro-European Macron is an opportunity to define a new practical vision for the rejuvenation of the European project.

For that to be the case, two things will need to happen. At home, Macron will first need to earn the trust of his international partners by demonstrating commitment to making structural reforms. In Europe, the EU has traditionally been driven by France and Germany, whose fraught relationship of late has put the European project on the brink of collapse.

Indeed, German Chancellor Angela Merkel often clashed with François Hollande, Macron’s predecessor, on the subject of debt mutualizing and deepening European integration, creating divisions within the Eurozone countries. To give the EU its poise back, Macron will thus need to offer a roadmap that Merkel can support without appearing to give some of the Eurozone’s heavily indebted countries a blank check to continue spending irresponsibly.

Encouragingly, Macron has thus far been sending all the right signals. Perhaps having learned from his time as Hollande’s finance minister, Macron, on his first official trip to Germany, moved to ease his hosts’ concerns by swiftly dispelling the idea of “mutualizing past debt,” leaving the door open for further negotiations. Merkel responded with equal enthusiasm in a joint statement by the two leaders that went as far as to suggest that “historic” changes to the EU treaty and Eurozone reforms were possible. Perhaps seizing on the fervor of the moment, Spain’s Prime Minister Mariano Rajoy also echoed the mood in Paris and Berlin by calling for deeper European integration to fight high unemployment in the Eurozone.

Domestically, too, hopes are high for Macron. In keeping with “third way” theory, Macron campaigned on a right-wing economic platform and a left-wing social agenda. On the trail, he promised to overhaul the labor market, simplify the tax code and roll back some of the regulations in order to boost innovation. This, he believes, will increase competitiveness, make the economy grow again, and drastically reduce France’s endemically high unemployment rate.

On social matters, Macron plans to introduce a system of rights and responsibilities rather than entitlement. For example, he wants to create a universal right to unemployment benefits, expanding it to include business leaders, artisans, and salaried workers who decide to resign. On the other hand, job-seekers will be required to accept the second suitable employment offer they receive. Similar programs will also be created to improve pension regimes, vocational training, and boost entrepreneurship. Some of these will be inextricably linked to the European project as Macron envisions EU-wide solutions through a process of deeper convergence.

Macron’s desire to bridge the gap between right and left is also evident in his first measure as president. Observing gender parity, he named a careful blend of right, left, and centrist politicians in his cabinet to oversee some of the changes he promised during the campaign.

Yet, despite recent polls showing growing support for Macron’s centrist government, the most immediate challenge to his ability to govern at home and influence policy in Europe will come in the shape of June parliamentary elections. To be able to implement the structural reforms the country needs, Macron’s En Marche! movement will need to carry a clear majority at the National Assembly.

However, with the country’s traditional parties such as Les Républicains, the Socialist Party, and the National Font looking ahead to the June parliamentary elections and gearing up for battle, a cohabitation scenario in which the president’s party will not control the parliament is a very real possibility. In such a case, Macron’s agenda will be upended and he will be forced to change strategy.

On the whole, the social, political, and economic challenges facing France both at home and abroad have been well known for over three decades. The fact that all governments throughout this time that have tried to tackle these issues have failed is an indication of the complexity of the task ahead. Who can forget former French President Jacques Chirac’s decade of relative idleness after a botched attempt to push through an ambitious reform program in 1995?

Without reforms and clear confidence from Germany that the French fiscal situation is being brought under control, there can be no sweeping consensus for change in Europe. Merkel indicated as much when she said that the “magic” of the first meeting between her and Macron can “only last if there are results.”

With a clear mandate to govern, Macron can help Europe define a new “third way” vision and find in Merkel a steadfast partner for change. It is, of course, up to the French people to decide when they go to vote for the National Assembly. However, once in the voting booth they would do well to remember that France and Europe may not get a better chance to revive the spirit of the European project.

Mayecor Sar is an Atlantic Council Millennium Fellow and a policy adviser at the presidential delivery unit in the Office of the President of Senegal. Follow him at @Mayecorsar.