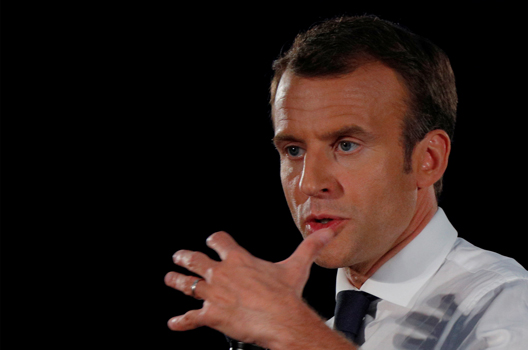 French President Emmanuel Macron could not have been more explicit in his remarks to a joint session of the US Congress: France will not leave the Iran nuclear deal without something “more substantial” in its place.

Unfortunately, the same cannot be said of the United States. Macron acknowledged the US administration’s reluctance to commit to the Iran nuclear deal when he said that “your country will have to take its own responsibility on these issues.”

Macron delivered his speech on April 25, at the conclusion of his first state visit to the United States.

Over the course of his administration, Macron has consistently sought to convince US President Donald J. Trump to stay within the Joint Comprehensive Plan of Action (JCPOA). Trump has disparaged the Iran nuclear deal since his time on the campaign trail.

In his speech, Macron urged the United States to uphold the JCPOA as the first of four pillars of a “bigger deal” that would also encompass ways of insuring that restrictions on Iran’s nuclear program continue after 2025, when the first limits come off on deploying more advanced centrifuges. Macron’s proposed new deal would also monitor and regulate Iran’s ballistic missile program and regional military interventions.

Though the new deal appears to address many of Trump’s concerns with the JCPOA, negotiating this with the United States, European stakeholders, and Iran will take time. However, time to settle this issue is in short supply.

The next deadline for the United States to waive nuclear-related sanctions against Iran is May 12. In his joint press conference with Macron on April 24, Trump once again called the JCPOA a “bad deal,” indicating he may think he can walk away and that the other parties will agree to new negotiations and terms more amenable to Trump’s agenda. In a small press conference after his speech, Macron also indicated his belief that Trump would stick to his plan to withdraw from the JCPOA.

France may be willing to work with the United States to renegotiate the terms of the deal. However, Iran and the other powers that negotiated the JCPOA will not. All of Macron’s hugs, kisses, handshakes, and charm may not have been enough to prevent Trump from blowing up the signature foreign policy achievement of his predecessor.

Barbara Slavin is director of the Atlantic Council’s Future of Iran Initiative. You can follow her on Twitter @barbaraslavin1.