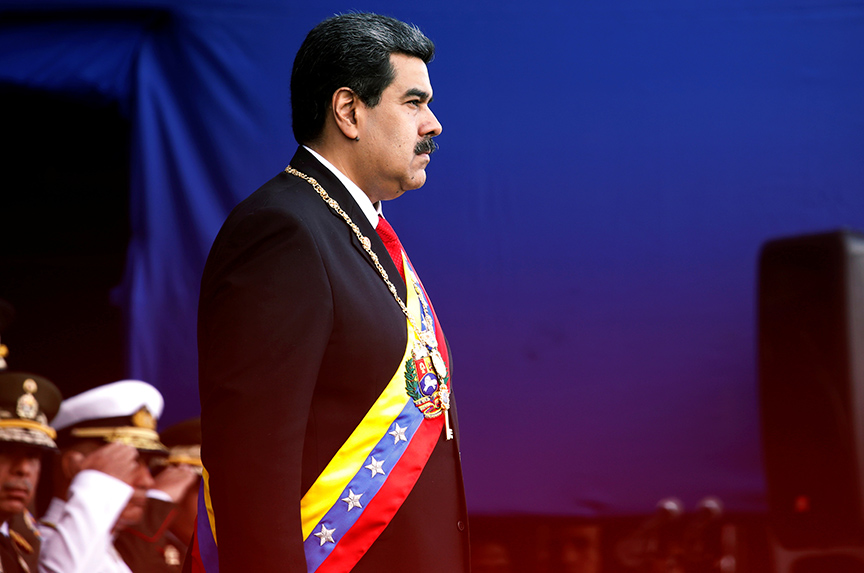 As the Venezuelan economy continues to deteriorate, the international community needs to work towards “a situation in which conditions can improve in the country and Venezuelans will no longer have to leave their homeland,” according to Jason Marczak, the director of the Atlantic Council’s Adrienne Arsht Latin America Center. But, Marczak warned, “That is not going to be possible under a Maduro regime.”

Nicolás Maduro was inaugurated as president of Venezuela for a second term on January 10, after elections that more than 50 countries around the world condemned as illegitimate. The United States, Canada, the European Union, and most of Latin America’s major economies have refused to recognize Maduro’s election and are undertaking a sustained external pressure campaign against the regime.

Maduro took power from Hugo Chavez in 2013 and has overseen an economic collapse in the oil-rich South American country. Inflation has hit more than 1.3 million percent, nearly half of Venezuelans now live in poverty, and more than 3 million Venezuelans have left the country.

Q: While Maduro has extended his control, the opposition in Venezuela still controls a much-weakened Congress. What tools does the opposition still have to place checks on Maduro’s power?

Jason Marczak: The illegitimacy of Maduro’s government and the fraudulent way in which he assumed a second term in office, was demonstrated by the reaction of the international community to his January 10 inauguration. Forty-eight countries have refused to recognize his election right after and the Organization of American States (OAS) on January 10 also voted in favor of additional diplomatic, financial, and political tools to increase pressure on Maduro.

Diego Area: The opposition can still take some concrete actions. First, they need to keep building internal pressure on the regime by reconnecting with the people, who are suffering deeply due to severe shortages of food and medicines, and who increasingly recognize that the only way to improve current conditions is through a change in government. Second, they need to remain unified and to stick to their plan – this is a very challenging thing. They have a plan and there is a window of opportunity with the election of a new National Assembly leadership. In order to remain impactful, gain the support of the Venezuelan people and achieve their aims of restoring democracy in Venezuela, they need to remain unified. Finally, the opposition should keep providing information and insight to the international community, so that they can help build policies to combat corruption schemes, violation of human rights, and other regime misdeeds.

Tufro: Zerpa’s defection is an example of how the international pressure campaign underway can stimulate defections among government loyalists and could provide a demonstration effect for others to defect. His defection could also provide valuable insights into what is leading people to defect that the international community could use to tweak its pressure campaign to further incentivize those defections. It could also help us identify what incentives or guarantees defectors and other loyalists who are considering defecting are looking for, so that we can encourage further debilitation of the government’s pillars of support and have them contribute to efforts to push for a democratic transition in Venezuela.

Q: The Venezuelan economy continues to be in severe crisis with devastating inflation. Has Maduro signaled any significant changes in economic policy to try to turn the crisis around?

Area: Maduro has on multiple occasions announced new plans and changes for the economy. But no plan he has provided has any credibility or viability. The political instability that increased with his swearing in yesterday, in addition to his systematic attacks on the private sector, creates severe distrust and deep uncertainty about the country’s economic future. What we know for sure is barring some significant changes, Venezuela’s future looks dark. Projections from the International Monetary Fund (IMF) show that inflation is expected to reach 10 million percent by 2019, while the United Nations predicts 2 million more migrants will leave Venezuela this year.

Tufro: Rather than helping, Maduro’s economic policies have been at the core of the further deterioration of the economy. Whether that is in the form of food subsidies or otherwise, the regime is using Venezuela’s limited economic output as a tool for political influence versus a long-term solution to the dire economic situation in the country. Additionally, as the economy started dramatically deteriorating and as sources of external funding dried up, the Venezuelan government has diverted large portions of the national oil company’s – PDVSA – limited  oil production toward repaying tens of billions in outstanding loans to the Chinese and the Russians. So amidst a backdrop of lack of investment, dearth of remaining technical expertise following a government purge, and a significant decline in PDVSA’s ability to produce oil at full capacity, the government is using most of what they are producing to repay these loans, thereby ensuring that from a long term sustainability perspective, they are not only preventing the economy from growing today, but they are ensuring that it will lack the resources to grown in the future. Economic recovery in the oil sector alone is a project that will take decades.

Marczak: It is important to put all of this in perspective. Venezuela was historically one of the richest countries in Latin America. It has the world’s largest proven oil reserves. Up until Hugo Chavez took power twenty years ago, Venezuela was a thriving economy. During the Chavez years, price controls, nationalization, and capital restrictions, scared off not only the private sector and investors, but sent the economy into a downward spiral in which it was doomed to be supported by high oil prices. When those oil prices fell, it peeled the skin back from what was really happening, which was a systematic demise of the Venezuelan economy. This country should be a thriving oil-rich resource-rich productive economy that has been destroyed by Chavez. That destruction of the economy has only magnified since Maduro took control in 2013.

Q: During his inauguration speech, Maduro said the political right had “contaminated” Latin America and called out Brazilian President Jair Bolsonaro as a “fascist.” How do you expect new leaders in Colombia and Brazil to react to Venezuela’s continuing crisis?

Marczak: The concern in Colombia and Brazil has only mounted in the last few months. The problems in Venezuela are not just contained to Venezuela’s borders. Maduro’s inability to manage the economy and provide basic goods that guarantee survival has led to an average of 5,500 Venezuelans leaving the country a day. The UN expects that 5.3 million Venezuelans will have left the country by end of this year – that is an additional 2 million people in 2019 – and that is if conditions don’t get much worse. These refugees are generally going to Colombia first. This is a situation that is increasingly untenable and unsustainable and the resources that have been pledged by the United States, the European Union, and others is only a drop in the bucket. Brazil and Colombia are also likely concerned about Maduro’s increased ties with nefarious international actors like Russia and Iran. The increasing ties between Caracas and these countries should be concerning not just for Colombia and Brazil, but for the region and frankly the whole world.

Tufro: There is a distinction between Colombia and Brazil in that Colombia’s alignment with the US in its strong anti-Maduro stance is much more driven by the humanitarian and fiscal impacts the Venezuelan crisis has already had on Colombia. This is in large part due to the large migration flows they have taken in and frankly the generosity with which they have welcomed those migrants. Brazil, in contrast, has received much fewer numbers of migrants to date and its posture vis a vis Maduro seems to be much more driven by ideological alignment with the US than by the concrete impact the migrant flows to date have had on Brazil’s economy and security.

Q: National Security Advisor John Bolton confirmed on January 10 that the US will not recognize Maduro’s election, while there has been some discussions amongst policy makers – Senator Marco Rubio in particular – about the possibility of a military intervention in Venezuela, whether by regional allies or the US. What is the likelihood of this? Would such an intervention be effective?

Marczak: Military intervention is not the answer to solving the crisis in Venezuela. The history of military intervention, especially in Latin America, shows that that is not the way to resolve the situation. What is needed are additional diplomatic, financial, and political tools to force more fissures within the regime.

Tufro: That is also the case because the likelihood of a transition being effective and leading to a durable democratic outcome in the medium and long term increases significantly if there is a nonviolent and nonmilitary approach to reaching that transition.

Today, we don’t believe that the US or other powers are prepared to intervene military – despite some of the rhetoric we heard this fall. However, the one variable that could change that calculus for the US and other countries would be a concrete and sustained military presence by Russia, in the form of a base being established on Venezuelan soil.

Image: Venezuelan President Nicolás Maduro attended a ceremony at Fuerte Tiuna military base in Caracas, Venezuela, after he was sworn in for a second presidential term on January 10. (Reuters/Adriana Loureiro)