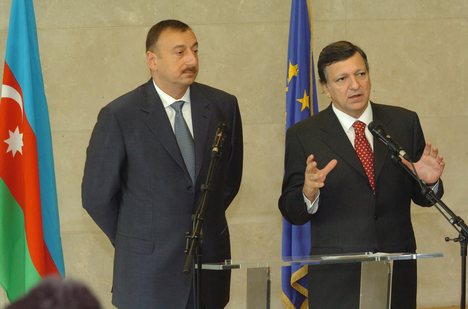 After a along period of political neglect the EU is finally responding to its critics by sending the President of the EU Commission, Mr. Barroso on a Caspian tour. The choice of countries is especially important – Azerbaijan and Turkmenistan. Clearly, energy is at the forefront of Mr. Barroso’s agenda. European Union is expecting to source a large portion of its future gas imports from the Caspian region, which means relations with Azerbaijan and Turkmenistan have to excel.

Ever since Russia began applying politics to gas, the European energy experts have been advocating greater EU energy diversity. As Europe’s own supplies of primary energy are on a decline – namely less and less natural gas – our dependence on imports will grow in the short to medium term. For this reason, how the EU structures its relationships with external energy suppliers maters a great deal. There will always be a way to improve our internal energy market efficiency – better integration of the energy markets of the member states, more competition in areas like production and supply of electricity, and more renewable energy. But there is no way Europe will be able to altogether avoid importing energy from third parties, ever.

The EU-Russia energy dialogue, which over the last four years has been burdened by politics, has complicated and compromised Europe’s engagement with the countries in the Caspian region. In the eyes of many EU capitals it is simply not worth further complicating relations with Moscow in exchange for better political cooperation with the Caspian countries like Azerbaijan and Turkmenistan.

But the fact is Europe needs an independent dialogue with the Caspian energy producers not burdened by relations with Moscow, and Mr. Barroso’s visit is a step in the direction.

The Caspian region is rich in natural gas and oil. It is said to be one of the biggest untapped reserves of natural gas in the world today. As the EU energy demand increases and EU shifts its dependence from coal to cleaner fuels like natural gas, the Caspian abundance in natural gas can supply the new EU demand in natural gas. Second, the geographic proximity of the Caspian to the energy markets of Southeastern and Central Europe is double added value for the EU. The old Soviet block, now part of the EU club has a particular problem when it comes to energy diversity. Countries like Romania, Bulgaria, Slovakia and others are almost 100 percent dependent on imports of gas from Russia.

By bringing the Caspian gas to this region, Europe will be better off as a whole, as will each of the central and southeastern EU member states. But there is the other side of the coin to consider as well. What added value is a closer energy partnership with the EU for countries like Azerbaijan and Turkmenistan? First of all, Europe is not the only bidder for the Caspian gas. There are others like China, Iran, India, and of course, Russia. China and India combined are the fastest growing economies in the world; China will soon be the biggest economy. Judging by the number of new kilowatt hours of electricity that are added on a month to month bases in China and India, the energy demand in the east is greater than in Europe. China is offering top dollar for access to Caspian energy. In addition to offering a competitive price for long-term gas contracts, Russia and China are also offering the Caspian countries political partnerships, technology transfers and cooperation in security matters.

So far, the EU has done the energy talk, but has less than enthusiastic in structuring a genuine political and security partnership with countries like Azerbaijan and Turkmenistan. In Brussels the debate is either about energy or lack of democracy in the Caspian region. But for Baku and Ashgabat to feel compelled to work with Europe, they need to get a political deal in return for their energy.

For example, Azerbaijan has been pushing the EU to recognize its territorial integrity and sovereignty rights. Armenian military forces still occupy close to 20 percent of Azerbaijan’s land 17 years after the two countries fought a war over Nagorno-Karabakh. Armenia won the war, but its position has subsequently weakened due to the country’s economic decline, international isolation and dependence on Russia. On the other hand, Azerbaijan’s position has strengthened thanks to its growing energy exchange and international links. In the eyes of Baku, Europe’s support for its cause has been less than straightforward and helpful. Azeri leadership cannot understand why in the case of Georgia Europe’s support for territorial integrity is straightforward, but when it comes to Azerbaijan, the EU Commission prefers to keep silent.

There is also the visa free travel issue, a policy the EU has been at pains explaining in the Balkan context, and has as of recently lifted the visa restrictions for all Balkan countries except Kosovo. To Azerbaijan, which someday hopes to join the EU, visa restrictions strike as unjust, especially in the context of business and student travel.

Mr. Barroso has a tall order of issues to address on his Caspian tour, and need to come home with an energy deal. But to score points on the energy front, he would be wise to offer some political carrots as well to his interlocutors in Baku and Ashgabat.

Borut Grgic is a nonresident senior fellow at the Atlantic Council and founder of the transCaspian initiative at the EPC in Brussels. This article was originally published in the Hurriyet Daily News.