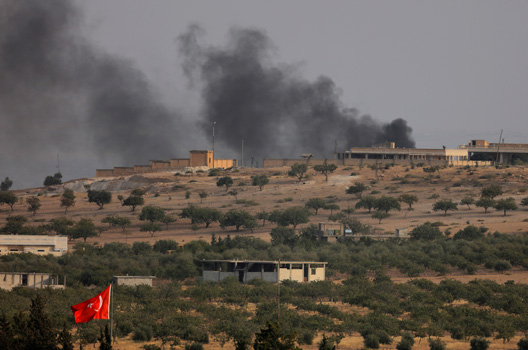 Turkish-backed Syrian rebels on August 24 seized an Islamic State stronghold in Syria. The military operation marks a significant escalation of Turkey’s role in the war against the Islamic State and comes days after the Turkish government vowed to “cleanse” its borders of the militants.

Aaron Stein and Faysal Itani, both senior resident fellows in the Atlantic Council’s Rafik Hariri Center for the Middle East, discussed latest developments in the region with the New Atlanticist’s Ashish Kumar Sen. Here are excerpts from our conversation.

Q: Turkish officials have recently suggested that there is a role for Bashar al-Assad in a transition period in Syria. This is a policy position that is perhaps more closely aligned with that of Russia and Iran. What are Turkey’s objectives in Syria?

Stein: I wouldn’t say Turkey’s interests are aligned with Russia and Iran. I still think that they are at opposite ends of the conflict. The Turkish position on Assad softened in September 2015 when President [Recep Tayyip] Erdoğan alluded to [Assad’s] ability to stay around in a transition for an agreed to period of time so long as once that time expired he would also expire himself in running Syria. There may be some softening on how that transition plays out, but I saw the most recent statement from Prime Minister Binali Yıldırım as a reaffirmation of that position.

Itani: This isn’t the first time we have heard the Turks talk about Assad staying on board for an indeterminate transitional period. I see them moving slightly closer to the American position, not the Russian and Iranian one. There is some disagreement among the various parties on how long this interim period would be and whether Assad’s exit would be guaranteed. For the Syrian opposition, the question of Assad staying or not staying is not as academic as it is to other powers who throw this around as though it’s an infinitely malleable negotiating point. For them, Assad is what this war is all about.

Q: To what extent are Turkey’s military actions in Jarabulus aimed at preventing the advance of US-backed Syrian Kurdish militias versus checking ISIS?

Stein: So far it is indirect. There have been reports leading up to the operation that there was some shelling of PYD [the Democratic Union Party (PYD) is the political arm of the Kurdish People’s Protection Units (YPG)] targets, particularly south of Jarabulus or north of Manbij. But there have been no reported clashes between the YPG and the Turkish military and their Arab allies on the ground. That’s because they are separate and haven’t come together as yet.

The YPG does not have any incentive to attack Turkey inside Syria. In fact, they have every incentive not to. The YPG are very dogmatic in their beliefs, but they are also very practical about how they prosecute their own war inside Syria and how they handle the United States diplomatically. They have been very frank and upfront that they cannot fight a standing army, and the Turks are a standing army even though the force that they have sent into Syria is relatively small.

Itani: Proximately, it is an attack on ISIS [the Islamic State of Iraq and al-Sham also known as the Islamic State], which brings some benefits— a) they are an enemy of Turkey; b) they grab important territory across the border. But mostly what it does is complicate Kurdish expansionism. I don’t think there is any prospect that they would attack Turkey or the Turkish forces, but something that they will have to plan around is that Turkey is now in their way—politically and physically.

Is this about ISIS? I don’t think so. This is about making sure that there is a territory in the north of Syria that is controlled by neither ISIS nor the PYD, but especially not the PYD.

Q: What does the loss of Jarabulus mean for the Islamic State?

Itani: The Islamic State militants didn’t actually stand and fight for Jarabulus. It is a small town of 10,000 people. It is true that it is near the Turkish border, but I am not sure at this stage how important it is for ISIS given that the Turkish border has been shut.

It illustrates after Manbij, which took a long time to take, that they are not going to fight for every battle and lose many men. They are now pulling back into Aleppo countryside to defend Al Bab, which is more important than Jarabulus. ISIS has been on a losing streak for a long time now. I didn’t know that they would cut and run like that, but they are not stupid either, so they left.

Stein: By all accounts, ISIS fled. They’ll say they tactically retreated. Operations like this have a supply line that will go back into Turkey. The Islamic State has shown its ability to attack targets inside Turkey, taking advantage of a lot of its members who enjoyed a freedom of movement into Turkey until 2015.

We are just a few hours into this operation. The difficult phase will come when ISIS responds asymmetrically and if a few Turkish soldiers from a leave-behind force get killed in a suicide bomb attack. What does that do politically for Turkey in trying to sustain this operation and what is the longer-term strategy? Do they plan to leave? I think they may turn Jarabulus over to the rebels and go back home. If they plan to stay, which is also possible, what are the next steps and how do you extricate yourself from Syria without a political transition?

Q: Is there a risk that Turkey will get drawn into a direct conflict with Syria?

Itani: Turkey is trying to secure a strip of territory across its border that is currently held by a relatively weak actor—ISIS. A combination of the Turkish military, the American air force, and local rebel groups is enough to take this territory. The complicating factor is that I don’t think the [Assad] regime will fight them. Absolutely not. They don’t have the capacity. And anyway, this isn’t territory that the regime holds. Where it could get complicated is if you have the rebels, the SDF, and the regime meeting in the countryside. Then I don’t know what will happen because obviously the regime will be fighting both sides.

Stein: Al-Bab is the potential flashpoint. It depends on what Turkey wants to do. There have been conflicting reports in the Turkish media that this will be quick in and out. And there have also been more grandiose statements that [the Turkish-backed rebels] are going to turn west.

The question for [Turkey] is that the rebels that they are backing here have proved weak and if they were to pull out, particularly of Jarabulus, I am not sure that they can hold it from a sustained ISIS counter attack. So I think they will have to stay. Then their withdrawal becomes contingent on a political transition inside Syria, which the Turkish government says it will push really hard for in the next six months and probably explains why they went to Iran and Russia. But are Russia and Iran ready to cave to any of their red lines? I don’t see any evidence of it.

Itani: No, they are not. The latest setback [for the Assad regime] in Aleppo created this optic that their momentum has been stalled and that the regime coalition is doing poorly. That is actually not what is going on. The most important geography in this entire war is Damascus and the area around Damascus and the regime is taking that after years of siege and chemical weapons attacks. The regime is facing no resistance on the southern front. In Aleppo, territory will switch hands, but it is unusable for the insurgency. So the regime is not at the current moment in time doing badly enough for its sponsors to agree to the potential red lines.

Q: What impact is this Turkish operation likely to have on the advances by the US-backed YPG-dominated force that has been advancing against the Islamic State at Manbij?

Itani: Their moving west has suddenly become much more complicated. That gets put on hold because it is Arab territory.

Stein: It matters because [the YPG] won’t be able to realize their own ambitions of connecting the cantons or at least they will have to go further south, perhaps through Al Bab, the potential flash point. Regardless, they control a considerable amount of territory in northeast Syria and they are busily setting up governance structures.

If you are talking about the broader dynamics underpinning the Turkey-Kurdish conflict, I don’t think this changes anything one bit. You still have a YPG-PKK [Kurdistan Workers’ Party (PKK)] protostate being built on their longest land border, while concurrently you have a PKK-led insurgency in the southeast that shows no signs of stopping, in fact it is getting worse. Those dynamics don’t change because Turkey sent a few tanks into Jarabulus and beat the Islamic State on a couple of square kilometers of territory.

Image: Smoke rises from the Syrian border town of Jarabulus, which Turkish-backed Syrian rebels reportedly seized from the Islamic State on August 24. The operation marked a significant escalation of Turkey’s role in the war in Syria. (Reuters/Umit Bektas)