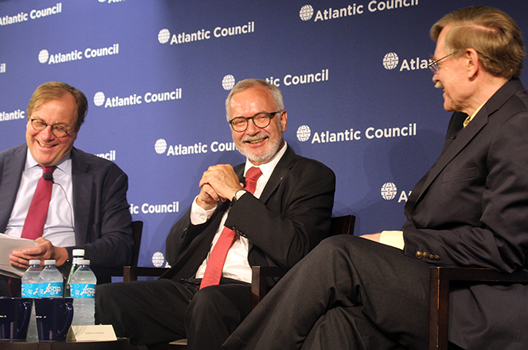 World leaders must reaffirm the importance of a cooperative international system and the tangible benefits to all stakeholders, Werner Hoyer, president of the European Investment Bank (EIB), said at the Atlantic Council on April 21.

While the surge of populism throughout Europe—in response to terrorism and economic stagnation—means that “renationalization is visible,” particularly in France during an election year, Hoyer insisted that when “the cooperative approach and the multilateral approach is being put into question in an irresponsible way… it is important to explain again the values of international cooperation.”

In France, Emmanuel Macron of the En Marche! movement and Marine Le Pen of the far-right National Front party won the first and second spots, respectively, in the first round of the presidential elections on April 23. They will face each other in a runoff election on May 7.

Le Pen has called for a French departure from the European Union (EU), and stricter border controls. Her calls for harsh security measures intensified after a policeman was shot dead in Paris on April 20, an attack claimed by the Islamic State of Iraq and al-Sham (ISIS). In contrast, Macron is an outspoken advocate of the EU, and the benefits of international cooperation.

With each new administration and change of government in Europe, “we have a certain temptation to cut the branch on which we are sitting,” Hoyer said, referring to multilateralism.

However, “we live in a global system,” said Robert Zoellick, former president of the World Bank and a member of the Atlantic Council’s International Advisory Board, adding, “no matter how powerful a country you are, it helps to have friends, too.”

Hoyer and Zoellick spoke at an event, hosted by the Atlantic Council’s Global Business and Economics program as part of its EuroGrowth Initiative, to discuss the role multilateral institutions can play in promoting international prosperity and security. Frederick Kempe, president and chief executive officer of the Atlantic Council, moderated the discussion.

“All of this demands collaborative, rapid, and global responses,” said Kempe. “That’s where multilateral institutions come in.”

Hoyer described how the EIB was founded as an institution to serve all members of the European Union, but also aid development projects around the world. At the EIB, he said, “we believe in multilateralism and cooperating structures because the European Union’s success is built on that.”

Kempe said: “multilateralism is the gears, the workings, the ending of so much of what goes on in the world.” However, he said, “while arguably more important than ever, it’s purpose is called into question.”

In the midst of discussion surrounding the French elections, labelled by Le Pen as a “referendum on globalization,” and the questions raised by US President Donald Trump regarding the value of international cooperation, the future of multilateral institutions is at a crossroads, according to Kempe.

“I think it’s fine for people to debate that,” said Zoellick. However, using the rhetoric of Trump as an example, Zoellick said that he “starts from a very mistaken perspective that it’s a zero-sum game; that if you’re serving the international system, you’re not serving the United States.”

Trump has criticized international institutions such as NATO and the EU, as well as multilateral trade deals, questioning the value-added benefits for the United States, and “pitting nationalism against internationalism,” Zoellick said.

“The danger here is that it’s a totally mistaken economic line,” he said, warning that “it’ll lead to mistaken approaches because you are trying to solve the wrong problem.”

“It also means you’re missing the next-tier issues,” Zoellick added, referring to China as an emerging player on the world stage. “There’s opportunities for China to gain, but if we’re trying to block our markets, that won’t happen,” he said, insisting that both the United States and Europe must focus on cooperative, rather than mutually destructive, approaches to the global system.

“The tricky thing with international agreements is that you are easily accused of selling your national sovereignty,” said Hoyer. He insisted that leaders must find a way to convince their people that nations are stronger in groups of countries that have organized their sovereignties together.

“By simply walking away from a group of cooperating people, you don’t get stronger, you get more lonely,” he said.

“We face monumental challenges, and only together can we surmount them,” Hoyer earlier wrote in a blog post for the New Atlanticist. “Though there’s no denying that currently Europe has many problems, it is still collectively convinced of the need to reach out beyond its borders to other continents, to other peoples.”

Hoyer expressed the hope that US President Donald Trump’s visit to Europe will be “an opportunity for our political leaders to be convincing enough about the benefits of multilateralism.” Trump will be in Brussels for the NATO Summit on May 25.

Zoellick described the benefits of international institutions, particularly financial institutions such as the World Bank, and the value-added services they can provide in an integrated global system. He said that the World Bank, of which he is a former president, serves as a nucleus of information for global development projects, can leverage funds to have a demonstrable impact on such projects, and can use capital in an innovative fashion.

“People tend to think about [multilateralism] in the way that people thought about development institutions when they were founded,” Zoellick said, adding “we’re so far beyond that.” Working through multilateral institutions, “you also shape ideas,” with the aim of creating new dynamics that go beyond the institutions, he said.

According to Zoellick, the key to appreciating multilateral institutions is “trying to understand that these banks and institutions can play a policy and catalytic role, rather than just a funding role.”  He pointed to the challenges of climate change and cyber security as areas where the EIB and World Bank can play a significant role in mitigating global threats. “This is where the international system has to continue to evolve; we’re not done with these issues,” he said.

Ultimately, “it is common sense that in an international system, we’re going to have more things that interconnect,” Zoellick said. He and Hoyer insisted that it is up to individual countries to resolve the issue of creating more and better integration which respecting national sovereignty.