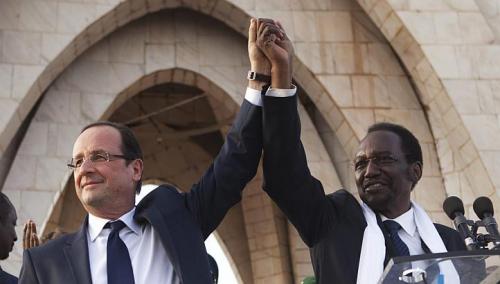 The triumphalism of French President François Hollande’s visit over the weekend to the fabled desert city of Timbuktu less than a week after French forces pushed out al-Qaeda-linked militants had more than a passing whiff of George W. Bush’s “mission accomplished” landing on the USS Abraham Lincoln ten years ago. Hopefully, both France and the United States have learned a lesson or two from the experience of the last decade of war.

While it is debatable whether or not the three-week-old intervention was especially well-conceived strategically or opportune in its timing, there is no denying that it changed the dynamic in the Sahel and that it lifted the pall of a brutal Islamist rule on tens of thousands of Malians whose shouts of “Vive la France!” and even “Vive Hollande!” gave voice to a genuine sense of liberation.

The danger now, as it was in the wake of swift fall of Bagdad, is that the apparently easy success will cause policymakers to underestimate the considerable challenges that remain and focus on maximizing the political gain by a rapid withdrawal. Hints of that type of thinking have emerged over the course of the last week as French Defense Minister Jean-Yves Le Drian went on a TF1 news broadcast to literally declare “mission accomplished,” while Foreign Minister Laurent Fabius assured the Le Parisien newspaper that “we will leave quickly.” At the airport in Timbuktu, Hollande himself declared that it is “not our role to stay,” although later in the day he added that, of course, “we will be with you to the end.”

That the French would want to avoid further entanglement in what is likely to be a long, difficult, and costly process is understandable. Not only did even a mission as modest as Opération Serval painfully expose the limits of their military capabilities, but their stagnant economy can hardly afford even this much. Moreover, as the panelists at Friday’s Atlantic Council event on managing the crisis in Mali and the Sahel discussed in some detail, the social and political fabric of northern Mali against which the security situation has to be grasped is extraordinarily complex. The militants have not so much been defeated as they have withdrawn from towns, taking refuge in vast expanse of a region the size of France itself from which it will require Herculean efforts to flush them out.

Thus another echo from the Iraq War: Secretary of State Colin Powell’s famous warning about “if you break it, you own it.” While the blame for the failure of the Malian state can hardly be laid at the doors of the Palais de l’Élysée—between five decades of marginalization and discrimination suffered by the Tuareg and other northern groups at the hands of their fellow countrymen from more populous southern Mali, the corruption of the political elites in Bamako, and the military coup that overthrew the country’s elected government last year, Malians did a good enough job themselves—France, now that it has intervened, can hardly disown the problem.

French forces certainly cannot withdraw precipitously given the parlous state of the Malian army, which disturbing reports over the past few days seem to confirm to be more interested in revenge attacks on civilians than capable of fighting real militants. While a United Nations-authorized African stabilization force is being assembled, it will take some time before its disparate components can be trained, equipped, and deployed. As for the troops which some African states—chiefly, Chad, Niger, and Nigeria—have sent directly into the northern Mali, these forces come with their own baggage and it will require a good deal of delicacy lest their presence have the unintended consequence of driving local populations into the arms of the militants.

On the political front, progress towards a restoration of constitutional order and necessary reforms of the Malian government has been stalled for months and needs to be jumpstarted. As noted previously, counterinsurgency is a contest for legitimacy, a commodity that the current authorities in Bamako have precious little of. The conundrum for Paris is that there can be no withdrawal without security and no security without legitimacy, but the success of the intervention has had the effect of reducing any sense of urgency on the part of Mali’s President Dioncounda Traoré or the military clique his government fronts for.

Thus, going forward, it is likely that French forces will have to remain in Mali much longer than Hollande and his ministers would probably prefer, the alternative being far worse chaos than if there had been no intervention in the first place. However, France’s allies in Europe and in America also have roles to play. A European Union mission has already been authorized to both retrain the Malian military and to train the African force. Other European countries can put their political and development resources to play in assisting with Mali’s political transition. In a place as poor as Mali, almost no contribution is so small as to be without impact; for example, the Danish government’s new Sahel initiative, which focuses on Mali, Burkina Faso, and Niger, and builds on longstanding development assistance to the region, will add $22 million over the next few years to programs privileging local solutions to stabilization challenges.

The United States promised $96 million in assistance at a donor’s conference this past week in Addis Ababa, although, in actuality, of the figure announced by outgoing Assistant Secretary of State for African Affairs Johnnie Carson, $32 million was previously pledged and $13 million already spent. American can also leverage its unsurpassed logistical and intelligence, surveillance, and reconnaissance (ISR) capabilities to assist the military mission in Mali, even without putting boots on the ground. An agreement this past week to set up a base for unmanned aerial vehicles in Niger, while not without its challenges, will provide hitherto unavailable real-time intelligence on northern Mali and other parts of the Sahel. The flights of the unarmed surveillance drone also open the door for possible future actions against key actors whose neutralization might not so much solve problems as buy some much-needed time to do so.

In short, far from drawing to close, the mission may just be getting started—for France and its partners on both sides of the Atlantic.