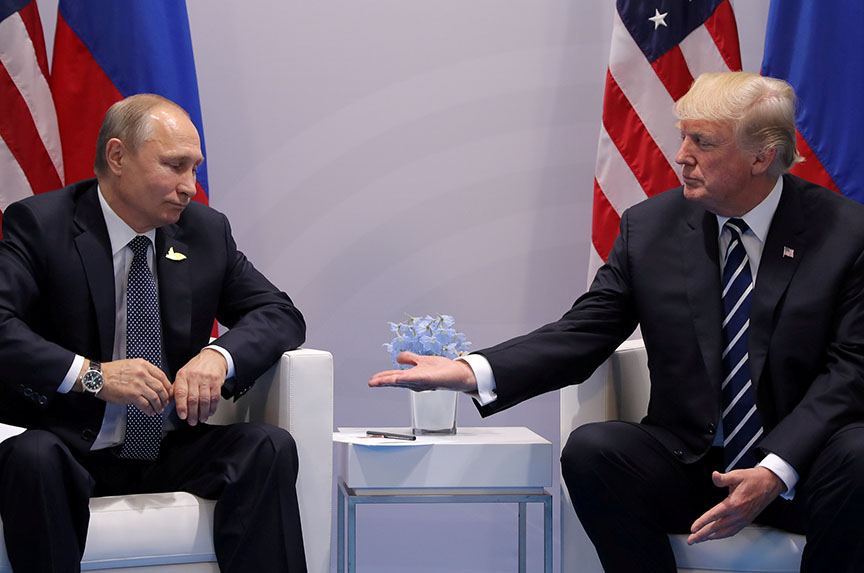 The Janus-esque Russia policy of US President Donald J. Trump’s administration has been thrust back into the forefront with the president’s summit with Russian President Vladimir Putin in Helsinki on July 16.

On one hand, the Trump administration has been tougher on Russia than it is sometimes given credit for: it has levied several rounds of increasingly severe sanctions, culminating in the April 6 decision to designate, among others, Russian oligarchs Oleg Deripaska and Viktor Vekselberg, sending shockwaves through global markets. Those actions were taken with warnings from senior administration officials that further destabilizing activities would be met with additional sanctions—a welcome intent to use sanctions as a deterrent.

On the other hand, is the president. Actions may indeed be louder than words; the administration has sanctioned Russia for its 2016 election interference that Trump continues to dispute.  But words from the president of the United States have impact, and his tweet the morning of the summit announcement supporting Russia’s claim it did not interfere in the US election undermines the actions of his own administration and weakens the value of its deterrence.

The president’s assertions are emblematic of a larger problem that is either a lack of consistent messaging (best case) or signaling that he actually wants to cultivate ties with Putin’s Russia at the expense of Western interests and values (worst case).  A summit that most observers see as premature and ill-conceived risks exacerbating the effects of Trump’s clear deviation from his administration’s declared policy and from a Congress that has sought to limit his ability to make nice with Russia absent actions by Moscow to curtail its assault on Western democracy.

While Trump is rightly criticized for his solicitude toward Putin, his administration has taken strong sanctions actions targeting Russia that deserve recognition. However, these strong steps have been undercut by subsequent public statements or news that appears to put into question the credibility of US policy, specifically, whether the president supports his own administration’s Russia policy.  These include:

The power of those sanctions was quickly undercut by the baffling public spat the following week when the White House pulled the rug out from under its UN United Nations Ambassador Nikki Haley, who had previewed additional sanctions against Russia following a chemical weapons attack by Bashar Assad’s regime in Syria.  The public fight was especially inexplicable because Haley appeared to be speaking from publicly available talking points which the White House itself had released.


This strong and well-coordinated action was undermined shortly afterwards by press reports that Trump was furious about (allegedly) being misled about the scale of the US action compared to European Union (EU) partners, who expelled around sixty Russian diplomats in total, and felt that he had been somehow tricked into the action by his subordinates.


Unfortunately, the unclassified report that the administration rolled out in late January 2018 did not reflect its serious work.  Rather, the public report was essentially a copy/paste of the annual Forbes list of wealthy Russians, supplemented by material from the Kremlin’s website and the Russian news outlet RBC’s list of large Russian companies, obviously produced in haste.  The public derision following that followed the release of the public report weakened the power of the strong, classified Section 241 Report as a tool to deter bad Russian actions.

The administration had generally acted consistent with US-EU/European national governments’ partnership on combatting Russia’s aggression in Ukraine, including giving US Special Representative for Ukraine Negotiations Kurt Volker more leverage to pursue negotiations to implement the Minsk Accords—until the G7, when Trump’s suggestion that Russia rejoin the G8 directly contradicted the policy that his administration has executed.

Trump’s refusal to acknowledge the scope and intent of Russia’s interference in the 2016 election and his unwillingness to criticize Putin over the issue weaken the deterrent achieved by such actions and create an atmosphere in which Russia actions seem like individual blips on the radar, rather than part of a coordinated, top-down policy.

The above incidents create a worrying profile of a president out of sync with his own administration as he moves toward a summit with Putin whose goals are not yet clear.  For Trump’s summit with North Korean leader Kim Jong-un on June 12, at least, there was an end goal of denuclearization that both the president and his advisers could agree on, as well as a commitment to not give sanctions relief prior to denuclearization.

In the end, Kim proffered a detail-free denuclearization commitment in exchange for Trump scrapping upcoming joint US-South Korea military exercises.  Critics of the summit zeroed in on the lack of detail and Trump’s offer to cancel the exercises without apparently consulting his own advisers or allies in Seoul.  Fair critiques, but teams of experts continue to work on the details and military exercises can be restarted relatively quickly.  It remains to be seen if negotiations can produce a credible deal, but on balance, the summit arguably did more good than harm.

Kim’s pledge for denuclearization is as nebulous as one would expect a Putin “concession” to be coming out of a summit.  In exchange, Trump could run back his Kim summit playbook and offer to cease US participation in NATO exercises.  Such a move would be yet another blow to the alliance Trump has been bashing since his candidacy.

But Putin is not after some temporary halt to NATO exercises that can be restarted once his pledges ring hollow; he wants sanctions relief.

The US-EU coalition on sanctions was a carefully crafted regime that cannot just be placed back on if Russia fails to live up to any promises made at a summit.  There is significant resentment among certain EU member states over the perceived harms those sanctions have caused European companies and Moscow has tried to forge inroads in sympathetic capitals to gain sanctions relief.  Thus far, no one has been willing to break ranks and refuse to renew EU sanctions.  Even a “small-for-small” trade—where the United States rolls back some sanctions in exchange for a Russian pledge to cooperate on some part of the Minsk Accords—would likely fracture that delicate coalition and wipe out the leverage that sanctions provide over Russia.

This would be disastrous.  Putin has been told repeatedly what he needs to do to get sanctions relief. Trump should maintain this strong US policy by reiterating those conditions at the summit and, indeed, set clear expectations of changes in Russian behavior in other areas (e.g., no more election meddling) that would precipitate any relief associated with the April 6 oligarch designations.  If Trump intends to use US leverage over Russia to negotiate, he must receive complete and verifiable commitments and actions by Russia to cease its aggressions.

This is not wishful thinking:  Congress included a review provision in CAATSA that binds the administration’s hands on sanctions relief for Russia, and requires congressional approval for any significant relief.  There is still a danger to EU unity on sanctions, however, even if Congress exerts its influence to prevent Trump from following through on any promises of sanctions relief.

This summit could, if handled correctly, set a strong framework to support efforts by Volker to achieve a settlement in Ukraine’s Donbas region, set expectations for better Russian cyber behavior, explore de-escalation of the hideous violence in Syria, and defend the integrity of the US electoral process.

These goals are more difficult to achieve given how far apart the president is from his advisers on Russia.  Instead, with respect to sanctions, the professionals who have done their jobs credibly should take a “do-no-harm” approach to the summit.  They should seek, as much as possible, to respect the integrity of the declared US sanctions regime on Russia.  Additionally, Congress could publicly weigh in on its expectations for the summit and recall its red lines on sanctions concessions by the US side.  Doing no harm may be the best achievable outcome for now.