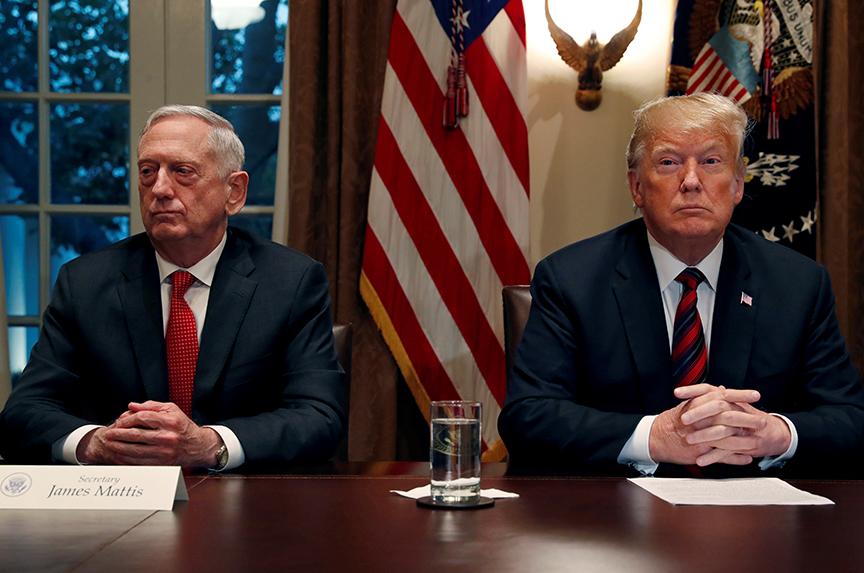 The differences between Donald J. Trump and Jim Mattis were on display in their statements on December 20. While Trump wrote in a tweet that his defense secretary was “retiring” at the end of February; Mattis made clear he was resigning over policy differences with the president.

Mattis submitted his resignation after a failed attempt to convince Trump to keep US troops in Syria, The New York Times reported.

“Because you have the right to have a Secretary of Defense whose views are better aligned with yours on these and other subjects, I believe it is right for me to step down from my position,” Mattis wrote in his resignation letter to Trump.

Trump said Mattis would leave the administration at the end of February.

“Throughout his tenure as secretary of defense, Secretary Mattis has been artfully able to balance staying true to his own principles and executing the president’s orders as commander in chief. It appears from Secretary Mattis’ resignation letter, that this fragile equilibrium has become impossible to maintain,” said Rachel Brandenburg, director of the Atlantic Council’s Middle East Security Initiative.

“Secretary Mattis has been a fierce champion of core US national security interests, among which he has long prioritized US relationships with allies and partners, as he stated clearly in his resignation letter,” she added.

Itani added: “I would pay some serious attention to what happens to our troops in Afghanistan. Will they stay?”

The New York Times, citing two defense officials, reported late on December 20 that the Trump administration is withdrawing roughly 7,000 troops from Afghanistan in the coming months. That is around half of the US troop presence currently in Afghanistan.

“With Mattis out of the way, why not just pick someone who is more marginal but pliable—or better yet, shares the president’s instincts on these matters,” asked Itani. “And, of course, with Mattis gone I think we can put to rest any speculation about a reversal on Trump’s Syria withdrawal decision.”

The White House announced on December 19 that it was pulling US troops from Syria where, Trump declared, “we have defeated ISIS.”

In his resignation letter, Mattis took a thinly veiled swipe at Trump’s America First ideology that has been marked by US allies being excoriated by the president, subjected to tariffs, and even branded national security threats.

“My views on treating allies with respect and also being clear-eyed about both malign actors and strategic competitors are strongly held and informed by over four decades of immersion in these issues. We must do everything possible to advance an international order that is most conducive to our security, prosperity and values, and we are strengthened in this effort by the solidarity of our alliances,” Mattis wrote.

Brandenburg said: “With Mattis’ resignation, the United States loses an advocate for critical alliances that have already been severely tested by this administration and the president’s unpredictable decision making.”

“In particular, in the wake of the president’s Syria announcement [on December 19], I expect many leaders around the globe are now evermore concerned. Not only will our allies lose a partner who appreciates the core importance of sharing the burden to secure our mutual interests, but they—and this administration—will lose an experienced leader with an acute understanding of the risks and costs of employing military force,” she added.

While the timing of Mattis’ resignation caught some by surprise, there has been speculation for some months now about his future in the Trump administration. That speculation gathered momentum after Trump, in a 60 Minutes interview broadcast on CBS in October, said of Mattis: “I think he’s sort of a Democrat, if you want to know the truth.”

Insisting in that interview that he and Mattis shared a good relationship, Trump said his defense secretary “may leave.”

“I mean, at some point, everybody leaves,” Trump said. “Everybody. People leave. That’s Washington.”

Image: US President Donald J. Trump (right) spoke to journalists while gathering for a briefing from his senior military leaders, including Defense Secretary Jim Mattis (left), in the Cabinet Room at the White House in Washington on October 23, 2018. (Reuters/Leah Millis)