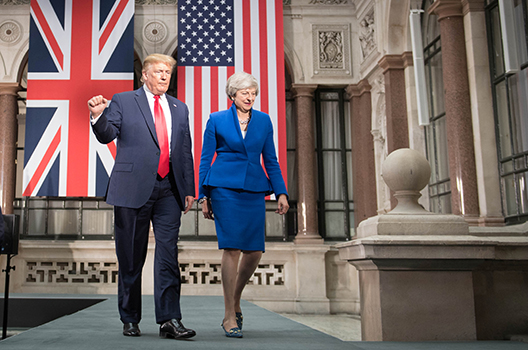 US President Donald J. Trump and British Prime Minister Theresa May praised the strong alliance between their two countries on June 4, while downplaying divisions on issues such as China and Iran.

Speaking at a joint press conference in London on Trump’s official state visit to the United Kingdom, both leaders used the upcoming 75th anniversary of the World War Two invasion of Normandy to highlight the historic bond between the two nations. “Our special relationship is grounded in common history, values, customs, culture, language, and laws,” Trump said, adding that both countries believe that “the defense of our nations does not begin on the battlefield, but within the heart of every patriot.”

May said Trump’s visit right before the D-Day anniversary marked “a celebration of the special relationship between the United Kingdom and the United States, enduring partners who stood side by side on that historic day and every day since.”

May highlighted the US response to the 2018 chemical poisoning of former Russian intelligence officer Sergei Skripal in Salisbury and the common effort of the United Kingdom, the United States, and France in responding to Syrian leader Bashar al-Assad’s chemical weapons attack in 2018 as examples of the strength of the transatlantic relationship.

Despite this positive focus on the special relationship, Frances Burwell, an Atlantic Council distinguished fellow, said Trump’s visit to the UK had in fact “seriously eroded” this relationship. She explained the Trump administration has “undertaken a remarkable degree of interference in an ally’s domestic politics,” the president has “made clear his preferences for Prime Minister May’s successor, while refusing to meet with the opposition leader and insulting the mayor of London”; and the administration has said “that the UK should leave the EU and that a ‘no deal’ Brexit would be great.”

More pointed differences on how to deal with rising challenges from Iran and China divide both sides of the Atlantic. Despite Trump’s decision to withdraw the United States from the 2015 Iran nuclear agreement—the Joint Comprehensive Plan of Action—May confirmed that London still supports the deal. She noted, however, that she still understands “the importance of our two nations working together to address Iran’s destabilizing activity in the region and to ensure Tehran cannot acquire a nuclear weapon.”

The British prime minister maintained that it is “important that Iran meets its obligations and we do everything to avoid escalation, which is in no one’s interest.” Trump demurred from directly commenting on the United Kingdom’s continued support for the JCPOA, but noted that the United States considers “the spread of nuclear weapons” as perhaps “our greatest threat.”

Policy makers in Washington have also been concerned with discussions within the UK government about potentially purchasing equipment from Chinese telecom giant Huawei as part of the United Kingdom’s attempt to develop its 5G infrastructure. Trump administration officials have consistently warned US allies that using Huawei technology could endanger intelligence sharing with the United States, and the controversy over the United Kingdom’s potential Huawei purchase led to the firing of UK Defense Secretary Gavin Williamson on May 1.

Despite the concerns, Trump argued on June 4 that there will be no danger to intelligence sharing with the United states as “we are going to have absolutely an agreement on Huawei and everything else.” He predicted that there will be a solution to the disagreement which will see “absolutely no limitations. We have never had limitations. This is a truly great ally and partner and we will have no problem with that.”

Burwell said that Trump “has defused, for the moment, a serious potential row over the inclusion of Huawei components in the UK’s communications network by saying that the US and UK are sure to reach agreement and there will be no need to restrict intelligence cooperation.”

UK is sharing the NATO burden, but others are not

Two months after NATO leaders celebrated the Alliance’s 70th anniversary, Trump doubled down on his long-standing complaint that members of the military pact are not spending enough on their defense. “The prime minister and I agree that our NATO allies must increase their defense spending,” Trump said, noting that the United Kingdom remains one of the leaders for the Alliance in this regard. “We expect a growing number of nations to respect the 2 percent of [gross domestic product on defense spending] requirement,” he said. “To address today’s challenges, all members of the Alliance must fulfill their obligations. They have no choice, they must fulfill their obligation,” he warned.

May agreed with Trump’s message, congratulating the president for his success in seeing “members pledge another $100 billion, increasing their contributions to our shared security.” May also announced that the United Kingdom would soon be contributing new “Queen Elizabeth-class aircraft carriers and F35 aircraft” to NATO missions “to help tackle threats around the world.”

Both leaders also referenced the potential for a new free trade agreement between the United States and the United Kingdom, should London leave the European Union (EU) as intended by May’s government. May announced her planned resignation on May 24 over an inability to get a Brexit deal through the UK Parliament, and the United Kingdom has until October 31 to either pass a withdrawal agreement, revoke the withdrawal process, or leave the EU without a deal managing the transition.

Trump said that he is confident Brexit “will happen, and it probably should happen.” He added that he thinks “the prime minister has brought it to a very good point where something will take place in the not-too-distant future. I think she has done a very good job.”

Noting the Trump administration’s support for a “no deal” Brexit, Burwell noted that “during the UK Parliament’s last debate about Brexit options, US National Security Advisor John Bolton argued on British television that staying in the EU customs union would endanger future relations with the United States.”

Once the United Kingdom does leave the EU, Trump maintained that “the United States is committed to a phenomenal trade deal between the US and the UK. There is tremendous potential in that trade deal.” May echoed this hope, saying that “our economic relationship will only grow broader and more deeper” after Brexit.

Foreshadowing some potential points of contention in the future, however, Trump said that when negotiators sit down to discuss the parameters of a new free trade deal “everything will be on the table. When you are dealing with trade, everything is on the table.” Trump conceded that this could potentially include access for US businesses to contracts with the UK’s National Health Service, echoing comments by the US ambassador to the United Kingdom on June 2.

“How this would happen was not at all clear, but this is a clear redline with the British public,” Burwell said. May distanced herself from that assertion, explaining that during discussions “both sides negotiate and come to an agreement about what should or should not be in that trade deal.” As Burwell explained, “Concerns about this possibility led to serious opposition to the Transatlantic Trade and Investment Partnership (TTIP) negotiations. Concluding a US-UK trade deal was always going to be difficult, but the president has just made it much harder.”

From Iran to China to trade, both May and Trump worked hard on June 4 to show their united front in support of the special relationship between Washington and London. These points of contention, however, remain and could define the health of the partnership as May’s successor attempts to steer the United Kingdom on a different course.