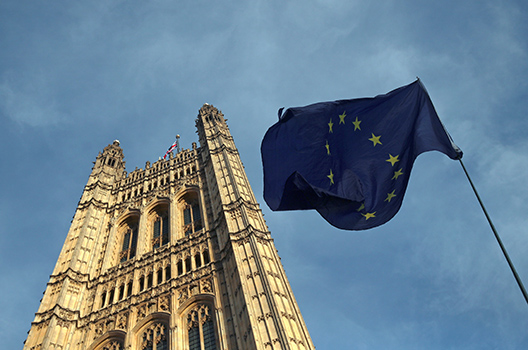 An EU flag flutters outside the Houses of Parliament, in Westminster, London, Britain, February 13, 2019. (REUTERS/Hannah McKay)

An astonishing day in the British House of Commons as the Government slumped to a striking defeat over its plans for Brexit, with parliamentarians calling for a constitutional revolution under which parliament would instruct the government on just what it has to do to end the Brexit crisis.

Moreover, as both the ruling Conservative Party and the opposition Labour Party struggled to whip their own rebels into line, Labour finally came out with a clear statement of just where it stands on the future of Brexit – either the UK should enter a customs union with the EU or there should be a second referendum to ensure Britain did not leave the EU without a deal.

With the government losing the main motion by forty-five votes, it increased the chances that at some stage it will be Parliament, rather than government, that determines the final shape of Britain’s departure from the EU – or even whether it leaves at all.

One very senior Conservative MP, Sir Oliver Letwin, said that parliament itself – rather than the Government – would have to legislate to ensure that the UK did not leave the EU without an agreement. This is truly revolutionary idea. In the UK, the executive arm – the Government – is formed from the legislature but does not consist of the whole legislature. What Letwin is effectively proposing, and for which he has broad support across the political spectrum, is that the legislature as a whole should take control of the Brexit process. In effect, on this issue and everything related to it, the Parliament would effectively become the Government. One irony is that it was Sir Oliver who oversaw the 2015 manifesto that helped secure the Conservative Party’s unexpected overall majority in the 2015 election, a development which led directly to the 2016 referendum in which Britons voted 52-48% to leave the EU.

Today was supposed to be a day when the government would propose a ‘neutral motion’ to Parliament, intended simply to approve the Prime Minister Theresa May’s negotiating stance in advance of more decisive votes expected in two weeks’ time. But instead of platitudinous comments to fill the space, the chamber echoed to defiant cris de coeurs as both opposition members and Conservative Remainer rebels tore into the government for pursuing a path they considered would cause grave damage to both the UK economy and to Britain’s international reputation.

Then came the votes. In the main vote, the government suffered a forty–five-vote defeat – 258 to 303 – as seventy-four hard-line Conservative Brexiters abstained on the grounds that the motion was not tough enough about ensuring that ‘No Deal’ remained an option in the Government’s ongoing negotiations with the European Commission.

The Government was able to defeat two opposition amendments, but conceded a key third amendment rather than face another rejection. It defeated a Labour attempt to force the Government to present a final Brexit final plan no later than February 27,  on an essentially orthodox party line vote of 322 to 306. The Government then easily defeated – by 315 to 93 – a Scottish National Party (SNP) effort to secure a three-month extension to the current ‘Article 50’ deadline for leaving the European Union on March 29. But the most significant result here was that forty-one Labour MPs broke ranks and voted with the SNP against their party’s strictest instructions that they should abstain.

Finally, to avert an expected defeat on an amendment requiring it to publish details of the anticipated devastating impact on a ‘No Deal’ Brexit on business and trade, the Government agreed, about an hour before the vote was to be taken, to meet with the amendment’s proposer, Conservative Remainer Anna Soubry, and then publish “the relevant papers” detailing the expected impacts. According to Soubry, some cabinet ministers have described the impacts as devastating.

In substance, today’s votes do not change much, but they may well alter perceptions, not least by providing further evidence to the European Commission that May’s strategy of relying primarily on an alliance of her own Conservative Party and Northern Ireland’s Democratic Unionists is not likely to win the day when the decisive votes are finally held. This in turn makes it more likely that the Commission will only seek to improve the terms of the Withdrawal Agreement if it sees evidence of real bipartisanship with the opposition Labour Party. And for that to happen, May would have to give way on one of her key ‘red lines’ – that the UK should not enter into a customs union with the EU after Brexit.

What does all this mean? Primarily, it illustrates the tensions within Britain’s two major parties. One Conservative Remainer, former Attorney General Dominic Grieve, remonstrated that “threatening to leave is the behaviour of a three-year-old who says they will hold their breath if they do not get the toy they want.” He warned: “there is going to come a time when my ability to support this government is going to run out.”

Perhaps the most pertinent comments came from Jenny Chapman, who speaks for Labour on Brexit.  “We are no closer to breaking an impasse that we know must be broken,” she said in her closing speech. But then she added: “It’s this house that is going to have to step in and prevent no deal.” That opportunity should come on February 27, when May has promised what should be a round of substantive votes. But the prime minister has, as so many MPs said today, kicked the can down the road so much that she will almost certainly seek to delay the most crucial votes well into March.

The day did highlight the increasingly febrile nature of UK politics. Splits in both the Conservative and Labour parties were on display. But, significantly, Labour’s Chapman used her speech to make the most public declaration to date that the official Labour Party leadership is indeed still looking to a second referendum as a possible way of resolving the crisis.

Chapman said that, right now, the way forward is “either a close economic relationship that includes a customs union and close alignment to the (European Union’s) single market…..or if the prime minister digs her heels in and continues to pursue a failing and undeliverable strategy, a public vote in order to prevent ‘No Deal.”

Almost certainly, the declaration was a response to warnings that a substantial number of Labour MPs were prepared to quit the parliamentary party unless the leadership backed a referendum.

So, at the end of today’s debate, it is just possible to argue that Labour is more united than the Tories. But who knows whether that will hold true whenever the next round of major voting takes place.