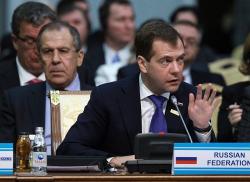 “It’s a victory! We are hosting the 2018 World Cup,” a beaming Russian President Dmitry Medvedev tweeted his countrymen, moments after the Fédération Internationale de Football Association (FIFA) made its December 2 announcement in Zurich. It was a big turnaround from the frown he wore just 24 hours earlier as he stormed off from the Astana Summit of the Organization for Security and Cooperation in Europe (OSCE).  Russia was badly beaten up on the summit’s opening day and Medvedev was not going to endure it another day. Medvedev’s summer smiles, it seems, have mostly given way to approaching winter frowns.