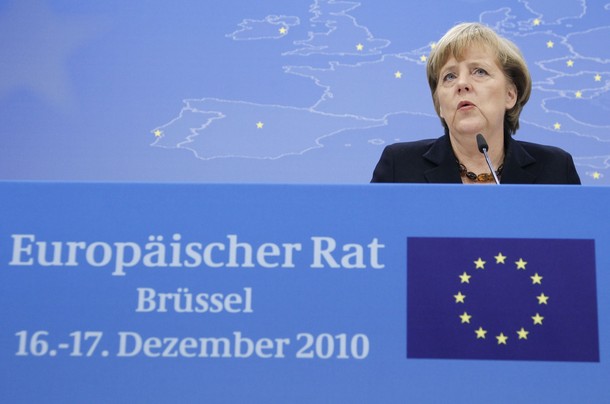 Even as Angela Merkel continues to suffer defeats within her own governing coalition in Germany, she has once again imposed her will on the EU, forcing austerity rather than additional bailouts to deal with the ongoing fiscal crisis in the eurozone.

FT‘s Peter Spiegel calls, "The amendment, which must be ratified by all 27 member states, allows for eurozone countries to create a permanent rescue fund in 2013, the most concrete change in EU institutions since the debt crisis began threatening the single currency early this year."  But it’s far less than many thought necessary:  "But in spite of calls by leading officials, including the head of the European Central Bank and International Monetary Fund, for a more immediate Europe-wide response to the crisis, a core group of northern, fiscally prudent countries resisted calls for short-term changes to the EU response system.  Instead, senior officials from these countries – including Germany, Finland, the Netherlands and Sweden – have insisted that the EU re-emphasise fiscal austerity in so-called “peripheral” members and quickly pass new budgetary rules that would fine profligate countries."

Spiegel‘s Carsten Volkery observes that, "What had been derided in summer as a unilateral demand from Berlin has now become European consensus."  That’s too strong a word.   It’s probably more accurate to say that the rest of the EU came to see that accommodating Merkel’s position was the cost of doing business.  (The parallels to the recent tax compromise in the US, where a bitter President Obama accused opposition Republicans of holding him hostage are striking.)

Volkery notes that "Merkel had insisted on the treaty amendment in part to avoid a scenario in which future bailouts could be challenged in German courts."  Indeed, German politics, generally, has been a driving consideration for the whole crisis response.  Spiegel’s Siobhán Dowling notes that Germany’s "popularity in the rest of the EU is at its lowest ebb in decades" but the reverse is just as true; beleaguered Germans are having trouble seeing the advantages of propping up flagging economies among the Union’s weaker sisters.  Which puts the chancellor in a tough spot:   "Merkel is struggling to find a balance between meeting Germany’s commitments to its European partners and not antagonizing taxpayers at home who are loath to pay for what they see as the more profligate ways of some euro-zone states. Meanwhile she is also coming in for sharp criticism from the opposition at home over her handling of the crisis."

Earlier in the week, Merkel had told the Bundestag that "nobody in Europe will be abandoned" and that "Europe only succeeds if we work together."  But this brought sharp denunciations from the opposition even while many on the Right thought Germany was shouldering too much of the burden. Her erstwhile coalition partner, Frank-Walter Steinmeier, leader of the Social Democratic Party (SPD), has called for a "more radical, targeted effort to end the current uncertainty."

Dowling cites the diverse commentary from Germany’s leading newspapers, with Süddeutsche Zeitung decrying Merkel for coming off as being "selfish" because her arguments were too rooted in Germany interests. Die Welt retorted that "Those who decry this stability-orientated stance as German selfishness have not understood that long-term prosperity cannot be financed on the nod but must be earned."

Against this backdrop, Spiegel‘s Volkery writes of "Merkel’s Ironic Victory in Brussels."

Merkel wants to prove to voters at home that she represents German interests; she hopes to keep German-funded rescue operations to a minimum. This has not gained her much love in Brussels. The usual complaint this year has been that Germany isn’t leading in the euro crisis; it’s applying the brake.

Merkel is also under attack at home. Many Germans feel she’s not braking hard enough, but letting leaders in Brussels cheat the German government. And it’s true that she’s had to abandon or dilute many of her positions. German recommendations—like a withdrawal of voting rights from euro-zone governments that run irresponsible debts—have proved unenforceable.

But, whether it ultimately proves Pyrrhic in terms of either her domestic political circumstances or the future of the eurozone, it was a victory nonetheless.  As Business Insider‘s Gregory White observes, "The deal European leaders have sorted out to backstop the monetary union looks near-exactly like her 9-point proposal on the issue."  For now, at least, Merkel continues to drive this train.