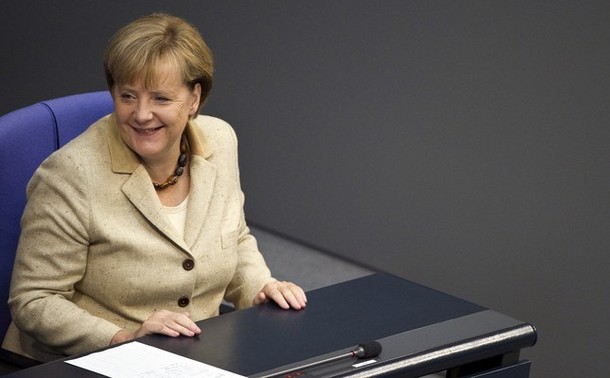 In the run-up to D-Day in 1944 the British ran a superb deception campaign called Operation Fortitude to fool the Germans as to the real location of the invasion. It worked spectacularly. Today, the Germans are being fooled again, this time by their own government.

The report by the EU-European Central Bank-IMF Troika on Greek efforts to reduce €13.5bn of their budget deficit in return for more of my money and a two-year extension is pure theater. Berlin took the decision a long-time ago to give Greece the extra time and money. Chancellor Merkel’s presence to be awaiting the Troika report before making a decision was revealed by Athens this week to be what it is: political sleight of hand. The reason is simple: Merkel wants to mask the truth about the real cost of saving the euro until after the September 2013 German federal elections.

It was Luxembourg Prime Minister Jean-Claude Juncker who famously remarked, “We know how to solve the crisis. We just do not know how to get re-elected afterwards.” It was a point this week reinforced by German Finance Minister Wolfgang Schauble, who contradicted French President Hollande’s outbreak of insane optimism by saying that Europe is only “in the eye of the storm.”

The figures are simply staggering and Schauble is of course correct. Hence the need to hide the hard truth from the German, Dutch (i.e. me) and other northern, western European taxpayers who are going to have to foot the bill with broken hopes, dreams, and bank balances. Even the most optimistic assessments suggest a Grexit (a Greek exit from the euro) would cost at least €320bn. And that does not take into account the secret EU (my) money being poured into banks across the Balkans which to all intents and purposes are insolvent. If the euro then began to progressively fail German banks alone would need at least €500bn to remain solvent or 20 percent of Germany’s gross domestic product. Even modest move towards a banking union and limited debt mutualization would cost between €300bn and €400bn of which the German taxpayer would be liable for at least 30 percent. Moreover, mutualizing debt would increase German interest costs by at least €15bn per year while cash transfers to poorer EU economies to bring their deficit-busting revenues up to that of mid-ranking EU member-states would cost the German taxpayer at least €250bn per year.

The consequences of Merkel’s perennial kicking of the now infamous can down the seemingly interminable road are dangerous in the extreme. At some point I will run out of money and the ECB’s printing presses will run out of ink and then the markets will take savage revenge. Moreover, Merkel may no longer be able to control this farce. At the next EU summit Britain, the Netherlands and Sweden will veto the European Commission’s future budget. This will mean that much of the regional aid and many of the infrastructure projects undertaken in recent years in central, eastern, and southern Europe with the promise that my money will be used to pay for them will effectively default.

Such a default will plunge Europe into another political crisis and bring into sharp relief the sheer incompetence of EU leaders in failing to deal with a crisis that they themselves have turned into a pending disaster. Merkel has much of the responsibility for this dereliction of duty to the European citizen for while she has talked Europe, she has meant Germany and only short-term Germany. As a consequence of this prevarication the fundamental issue—growth-killing structural deficits that plague most EU member-states—has not even begun to be addressed. Indeed, her entire strategy of hoping sufficient growth will turn up to make the problem go away is doomed by her very inaction which increases the cost to her own taxpayer with each passing day.

Furthermore, while no-one can doubt her commitment to this most political of projects (and therein lies the problem) her prevarication and short-termism now makes it ever more likely the real crisis when it comes will either destroy the euro or force a democracy-busting, Franco-German axis crippling British-exiting leap to some form of weak political union wanted only by the self-interested Euro-fanatics in Brussels DC. That crisis will now come in the first quarter of 2014 and it will hit hardest in places like Italy from where I write you this missive.

To paraphrase Geoffrey Chaucer the truth will out–eventually. As Hollande said last week Merkel has her own deadline. Let us all hope it is not so late that the can has grown so big that not only can she no longer kick it—but it kicks back with a vengeance. Merkel must come clean with the German people now.