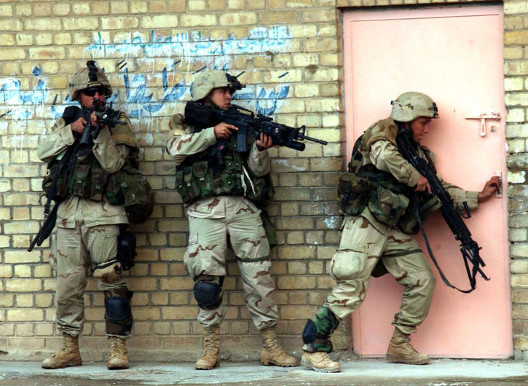 Many U.S. veterans of the Iraq war are feeling understandable anguish about recent al-Qaida gains in Ramadi and Fallujah.

More American servicemen and women died in Anbar province, where Ramadi and Fallujah are located, than in any other region of Iraq during the U.S. military intervention. Now the sheikhs of Anbar are fighting al-Qaida in an uneasy alliance with the Shiite-dominated government of Prime Minister Nouri al-Maliki.

The Obama administration is facing criticism for not doing more to bolster moderates in both Iraq and Syria. But Maliki rejected retaining U.S. troops after 2011 and there is no appetite in either Washington — or Baghdad — for American fighters to return or deploy elsewhere in the Middle East. That leaves the U.S. trying to contain the region’s conflicts, shore up fragile allies such as Jordan and convince local powers such as Iran and Saudi Arabia to expend more energy mediating wars than fueling them.

The resurgence of al-Qaida three years after the death of Osama bin Laden reflects the failure of Arab uprisings to produce successful governments that incorporate  moderate Islamists. In Egypt, Sunni radicals had predicted that the Egyptian military and intelligence establishment would not allow the Muslim Brotherhood to rule the country for long. Last summer’s coup against President Mohamed Morsi and subsequent crackdown on the Brotherhood validated al-Qaida’s predictions and have served as a recruiting tool for extremists.

The other reason for al-Qaida’s rise stems from rising Sunni-Shiite rivalry. While such tensions go back to the seventh century, the contemporary split dates to the 1979 Islamic Revolution in Iran and the 2003 U.S. invasion of Iraq. It was after the establishment of a theocracy by Persian Shiites that Saudi Arabia decided to pump more money into exporting its own brand of Wahhabi Islam to counter Iran’s anti-monarchical version (and defeat the Soviets in Afghanistan).

For a decade, Iraq’s Sunni dictator, Saddam Hussein – backed by the Saudis, other Gulf Arabs, Russia and the West – counterbalanced the theocrats in Tehran. During the 1990s, a weakened Saddam still kept the Iranians at bay in part by pretending to possess weapons of mass destruction.

The Bush administration upset the Sunni-Shiite balance by overthrowing Saddam in 2003 and dethroning the Sunnis, who had governed Iraq for five centuries. Since then, the region has been seeking a new equilibrium without success.

Saudi Arabia still refuses to accept the Shiite-led government in Baghdad and has not sent an ambassador there. When the uprising began against Bashar al-Assad in Syria three years ago, the Saudis and other Sunni powers decided to support the opposition in hopes of undermining another regime closely aligned with Iran and Shiite Hezbollah in Lebanon. The result, however, has been carnage, not regime change: backed by Iran and Russia, Assad has prevailed in a war that has killed more than 130,000 people, many of them civilians.

Meanwhile, more than 8,000 died in political violence in Iraq last year and scores were killed in Lebanon in terrorist bombings and assassinations fueled in part by the Syrian war. In Syria, as in Iraq, the bloodshed now involves Sunni on Sunni violence as more moderate factions take on the Islamic State of Iraq and Syria, an al-Qaida affiliate that seeks to establish an Islamic state in contiguous Sunni areas of the two countries.

In the past, Saudis worked with Iranians to mediate such conflicts; together they put an end to Lebanon’s 15-year civil war with the Taif agreement of 1989. Hassan Rouhani, now Iran’s president, negotiated security understandings with Saudi Arabia in the late 1990s when he was head of Iran’s Supreme Council of National Security and tensions rose over allegations of Iran-backed terrorism in the kingdom.

Former Iranian presidents Akhbar Hashemi Rafsanjani and Mohammad Khatami also reached out to the Saudis to resolve disputes. However, the Saudis do not appear to be in a mediating mood these days. Rafsanjani has been angling for an invite to Riyadh for months in vain.

The Saudis also appear to have vetoed Iranian participation in a scheduled upcoming conference on Syria. Iran was not among those receiving invitations to the meeting in Switzerland from the United Nations this week although U.S. Secretary of State John Kerry suggested that lower-level Iranians might take part “from the sidelines.”

Experts such as Bruce Riedel, a former U.S. National Security Council senior official who is now at the Brookings Institution, are worried that the Saudis have lost their capacity for nuanced diplomacy as an aged, infirm leadership allows ambitious underlings to determine government actions.

“You get reaction and pique rather than considered policy,” Riedel says.

In recent months, the Saudis have rejected a seat on the U.N. Security Council that they once avidly sought, declared that they would stop coordinating with Washington on regional issues, pledged to create a Gulf security force and offered $3 billion in French weapons to the Lebanese Army.

Many observers wonder who is actually in charge in Riyadh given the age and infirmity of King Abdullah, who is said to work only two hours at night, and of Crown Prince Salman, who is reported to be suffering from dementia.

Subordinates such as Prince Bandar bin Sultan, the former Saudi ambassador to Washington, are acting without apparent supervision as they dole out money and weapons to Sunni factions in Lebanon, Syria and Iraq including some that may have links to al-Qaida.

The royal family includes qualified people “one tier down,” Riedel says, mentioning interior minister Prince Mohammad bin Nayef and Abdullah’s son, Prince Mutaib bin Abdullah, in charge of the Saudi National Guard. But “it is not clear if they are part of the decision-making process at the strategic level.”

Ultimately, there must be homegrown solutions to the conflicts in the Middle East.

For the foreseeable future, there will be no more American boots on the ground. The most the United States can do is to avoid new wars, urge Iran, as well as Saudi Arabia, to work toward cease-fires, provide humanitarian relief and shore up fragile allies such as Jordan which are being inundated with Syrian refugees.

As Riedel put it: “We can try to contain the fallout. There is very little we can do about stopping the fire.”

Image: US Soldiers from the 1st Cavalry Division prepare to enter and clear a building during fighting in Fallujah, Iraq. November 12, 2004. (Photo: US Army/Sgt. 1st Class Van Boers Public Domain)