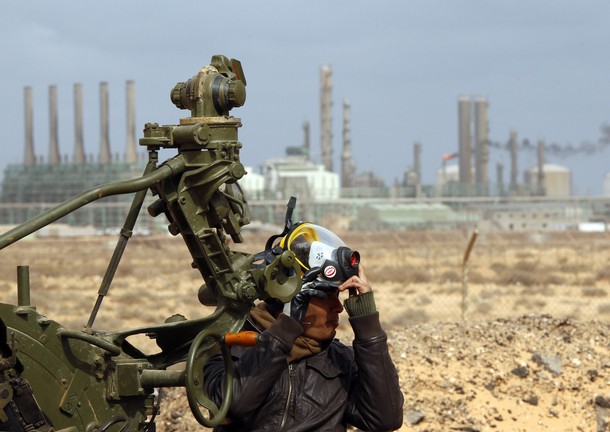 Something big is happening in the Middle East—precisely what is yet unclear. Unfolding developments and thoughtful analysis will no doubt tarnish some of the instant western labels affixed to the unrest—democratic wildfire, first Twitter revolution, etc. It may emerge that a major causal factor was food inflation exported from the first world to dead-end Middle Eastern economies.  And there will be more developments, including more surprises. Nonetheless, it is not too early to consider the likely consequences for the west, particularly for Georgia, of what is going on in the Middle East.

Libyan strongman Moammar Gadhafi has plunged his country into a civil war of tribal clashes, internecine military fighting and Sub-Saharan African mercenaries. More than 2,000 people are dead; 240,000 have fled the country. Libyan oil production is down and least 50% and could be cut off altogether—as the west dithers over a no-fly zone, Gadhafi could bomb the oil rigs in a final desperate act. The Greenstream gas pipeline to Sicily is off.

To the west, Algeria, which saw early protests over skyrocketing food prices, lifted its 19 year-old state of emergency, emboldening protesters to undertake still illegal marches in the capital of Algiers.

Bahrain, however, evokes greater geopolitical concerns. There, majority Shiite Muslims are protesting rule by minority Sunnis. King Hamad bin Isa Al Khalifa’s government has vacillated between violent crackdown and negotiation. With just 750,000 people, Bahrain is the geopolitical linchpin of the Gulf—home to the American 5th Fleet, within easy reach of Kuwait, Iraq, Iran and the Strait of Hormuz.

Moreover, a 25 kilometer causeway connects Bahrain to a predominantly Shiite oil-producing region of Saudi Arabia, rattling the Sunni rulers in Riyadh as well as worldwide energy traders. Today, Saudi Arabia is atwitter with talk of a March 11 “Day of Rage,” against which the authorities are mobilizing thousands of security troops.

This is just a brief snapshot of the phenomenon that will command the attention of the United States and other major western countries, impact the global economy and empower Russia.

An isolated crisis in Libya might be over in a few weeks. But whatever is happening in the Middle East, it is widespread and enduring. An altogether new security landscape is going to distract the attention of major western powers for some time.

Regrettably, this will divert attention from Russian shenanigans and put a premium on getting along with Moscow, including re-energizing the Obama Administration’s reset policy.

And the socio-economic consequences of Middle Eastern turmoil will further distract western capitals.

Tens of thousands of North Africans have fled to Europe and more are expected. The matter of how Europe should cope is rending political fissures within EU countries and among the 27 members.

And global oil prices have spiked. A barrel of Brent Crude reached $119 on February 24th. So far, only oil from Libya—less than 2% of world production—has been affected. But traders are hedging against greater disruption—their big fear is upheaval in Saudi Arabia, with 10% of world production. On March 1st, the EU predicted a $101 average price during 2011. However, “should geopolitical tensions spread further,” the EU report says, this could fuel “oil price increases beyond what is assumed in this forecast.” Some analysts believe that the price of oil in the coming months will match the $147 reached in 2008.

Energy prices above $100 per barrel will strike at barely recovering western economies, possibly driving them into stagflation—economic stagnation coupled with inflation.

Of course, worldwide economic trends apply to Georgia, particularly with regard to energy prices, inflation and foreign direct investment.

Moreover, Middle East energy uncertainty will further empower Russia. When the Greenstream Pipeline closed down, for example, Gazprom quickly compensated, upping gas delivery to Italy from about 65 to 81 million cubic meters per day. Europe is likely to become even more dependent on Russian energy and, therefore, more pliable on other matters.

As the Middle East lurches from crisis to crisis, Russia could appear to Europeans a more reliable supplier. In addition to political consequences, this could have concrete consequences such as nixing the Trans-Saharan gas pipeline that would bring Nigerian gas across Niger to Algeria and hence to pipelines that cross the Mediterranean to Europe.

To the extent that Russia manages to increase European energy exports, the importance of its access to Central Asian and Azeri energy resources will increase. In turn, it will maintain or increase geopolitical pressure upon the East-West Corridor, that is, on Georgia. Ideal ways to do this would be to blame Georgia for any unrest that emerges in Armenia, Azerbaijan or Russia’s North Caucasus region and to try to foment trouble inside Georgia.

Perhaps this all sounds a bit bleak, but countries—large and small, and Georgia is no exception—must scramble to cope with the major changes in the international environment wrought by events in the Middle East. While western attention is diverted, Georgia must tirelessly explain geopolitical developments in the Caucasus region, emphasizing the enduring importance of the East-West Corridor. It should continue to be a good ally by participating, in accordance with its capability, in any EU or NATO efforts.

Most important, Georgia must seize the big opportunity to send a message of hope to all people in the Middle East who want to rebuild their nations as strong, vibrant democracies—it will be hard, but it can be done!