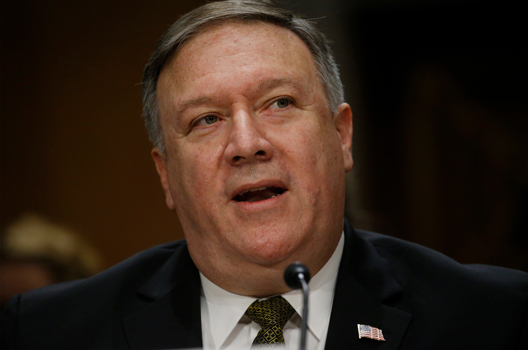 The US Senate on April 26 confirmed former Director of the Central Intelligence Agency Mike Pompeo as the new US Secretary of State.

US President Donald J. Trump picked Pompeo, a known foreign policy hawk on issues from Russia to Iran to North Korea, to replace Rex Tillerson at the State Department on March 13.

Tillerson officially stepped down on April 1. Pompeo assumed the post on April 26. This replacement is one of many that have taken place in the first fifteen months of the Trump administration. The White House has now seen two secretaries of state, three national security advisors, and two chiefs of staff. Whether Pompeo can help chart a steady course for US policy remains to be seen.

Pompeo’s past rhetoric on many of the most pressing challenges facing the United States have raised questions as to what the confirmation of Trump’s second secretary of state may mean for the future of US foreign policy.

Atlantic Council experts share their views on the significance of Pompeo’s confirmation and his potential impact on the myriad issues he will have to address as the United States’ top diplomat:

“Mike Pompeo’s confirmation as secretary of state can be a trade up for the administration, and perhaps for US foreign policy, if foreign leaders can assume he speaks and acts for the president, if he relatively quickly fills top jobs at State that are necessary to the president’s agenda, and if he has more of a public presence as diplomat-in-chief.

“The fact that he wasted no time and will be attending the NATO foreign ministers meeting in Brussels tomorrow is an important sign to our transatlantic allies that the United States remains committed to the peace and security in Europe.

“The fact that he will fly from there to visit our closest partners in the Mideast underscores his understanding of the urgency of Syria and Iran-related issues.”

Rachel Brandenburg, director of the Middle East Security Initiative in the Scowcroft Center for Strategy and Security:

“Secretary Pompeo has not been shy about his disdain for the Iran nuclear deal. We also know he has been perceived as very loyal to the president. It is worth considering, however, that while today he takes on a new position in Trump’s cabinet, he is not new to the Trump administration or cabinet-level deliberations therein. As director of the CIA, Pompeo was among Trump’s advisers on key national security decisions, including those presumably related to Iran.  While we can assume Pompeo will retain the ear of the president and we can expect to see him take on a more publicly diplomatic role than he had as CIA director, we shouldn’t assume he will automatically shift the balance of the debate on key national security decisions, this one included. Ultimately, what happens on May 12 will be up to the president. From what we’ve seen and heard to date, including over the past few days, Trump wants to keep us guessing until he alone has made up his mind. I expect Pompeo will fall in line to support the president’s decision wherever it ends up.”

“Mike Pompeo is now confirmed as the secretary of state, and among the many policy challenges he will face, there are overarching questions of management and record. While department-wide reform is needed,Pompeo has an opportunity distinguish himself from his predecessor and prove that he is not inherently pitted against the career experts, foreign service officers, and civil servants representing the United States around the world. He proved generally adept at this in the work place at the CIA, and he will need the same skills in Foggy Bottom. The main tool available to the secretary of state is engagement, and that engagement will need to focus internally and externally.”

“We can quibble and quarrel about this or that foreign policy pick—the new secretary of state is no exception. Mike Pompeo has friends and foes. No one disputes, though, that he promises to be a steady hand. The same applies to new National Security Advisor John Bolton, incidentally. Policy matters aside, this may be the last decent chance to stabilize a largely unstable president, and steady US ties around the world.”

“The Senate did the right thing in promptly confirming Mike Pompeo as secretary of state. The country needs an active and strong secretary of state. The looming negotiations with North Korea, which Mr. Pompeo advanced during a secret trip to Pyongyang, is the most immediate reason to get him to Foggy Bottom. However, a host of other issues, including a rambunctious Kremlin and the Iranian nuclear deal, await his attention. During his recent trip to Ukraine as director of the CIA, Pompeo impressed Ukrainian President Petro Poroshenko with his strong understanding of Moscow’s revisionist policies. With him at Foggy Bottom, the Trump administration’s strong pushback against Kremlin aggression and support for Ukraine should continue and perhaps improve.  Pompeo has already indicated that he will reverse Rex Tillerson’s disastrous personnel policies at state and fill senior positions.”

Matthew Kroenig, deputy director for strategy in the Scowcroft Center for Strategy and Security:

“Now that he is confirmed, Pompeo can begin leveraging his experience and relationships to reinvigorate the Department of State. It is disappointing that the US Senate couldn’t muster stronger bipartisan support for such a qualified candidate. Compare his fifty-seven to forty-two vote to the vote tallies of recent secretaries of state: John Kerry (ninety-four to three); Hillary Clinton (ninety-four to two); Condolezza Rice (eighty-five to thirteen); and Colin Powell (unanimous voice vote).”

Robert A. Manning, senior fellow at the Asia Security Initiative in the Scowcroft Center for Strategy and Security:

“Mike Pompeo’s confirmation as secretary of state comes at a critical moment for key global flashpoints—the Korean Peninsula, Iran deal, the Syria crisis. He will be especially critical to the success of the Trump-Kim summit and tough US diplomacy afterward to resolve the Korean question. Most urgent, however, is his challenge of choosing the best senior people to repopulate what is almost a ghost town at Foggy Bottom into a dynamic force in pursuit of US interests at an inflection point for the global order.”

“Secretary Pompeo’s close relationship with the president means that the State Department will now have a leader who speaks directly for the White House on Latin American issues. He will continue Trump’s push for a democratic solution to the crisis in Venezuela and be a vocal supporter of stronger actions to punish the Maduro regime. In particular, he has long been concerned with the presence of foreign actors, like Russia, taking advantage of the fluid security environment in Venezuela. Another area to watch is Secretary Pompeo’s position on Cuba. Expect him to not only continue the president’s policies but to perhaps use the leadership transition to enact tougher actions if reforms are not made.”

Jamie Metzl, senior fellow at the Asia Security Initiative in the Scowcroft Center for Strategy and Security:

“It’s certainly good news that the United States has a secretary of state in place when potentially starting critical presidential meetings with North Korea. But Mike Pompeo will need to lead a strategic revolution inside the Trump administration at home to make it even remotely possible for the United States to succeed in its diplomatic efforts abroad. Unless the chaos, corruption, and strategic incoherence of the Trump administration is fixed, very little can be accomplished abroad. The United States is in a deep state of crisis. Helping fix that would be Mike Pompeo’s greatest potential contribution as secretary of state.”

“When it comes to US policy on energy, the confirmation of Secretary Pompeo does not necessarily mean major changes, although I certainly hope he revives the Department’s crucial role both in diplomacy more broadly and in energy diplomacy more specifically. I expect the administration to continue to hold the line on Nord Stream II, and remain firm on the threat Russia poses to Europe’s energy security and continue to support Ukraine’s role as a valuable transit country.”

“An imminent test for Pompeo will be the looming May 12 deadline for a waiver of key Iran sanctions to continue US implementation of the JCPOA.  While he was noncommittal during his confirmation testimony, his past opposition to the deal is well documented, and he must advise the president whether to renew the waiver on May 12 or renege on the US obligations. If the president does refuse to renew that waiver, the sanctions could force other governments to choose whether to reduce their oil purchases from Iran or have their banks cut off from the United States for dealing with Iran’s Central Bank. Pompeo could face a confrontation with Europe, Russia, and China over the JCPOA within his first couple of weeks on the job, which will only get more challenging as critical sanctions waiver renewals are due in early July.”

Miyeon Oh, senior fellow at the Asia Security Initiative in the Scowcroft Center for Strategy and Security:

“As secretary of state, Pompeo will be able to play a more active and significant role in guiding Trump’s foreign policy on North Korea than when he was the director of the Central Intelligence Agency. He made a private trip to Pyongyang over Easter to meet with North Korean leader Kim Jong-un, ahead of the planned meeting between Trump and Kim that is expected to happen in late May or June. Such a secret trip was possible only with Trump’s full support. That continued support has enabled Pompeo to make an unprecedented move from ‘maximum pressure first and then engagement’ to ‘maximum pressure and engagement at the same time.’ Pompeo no longer needs to be the behind-the-scenes architect of Trump’s North Korea policy—instead, now that he is sitting at the negotiation table, through firmness and persistence he can hopefully accomplish the ultimate goal of total denuclearization.”

Todd Rosenblum, nonresident senior fellow in the Scowcroft Center for Strategy and Security:

“All presidents deserve a wide degree of deference in their choices for Senate-confirmed positions. Pompeo may not have checked enough political impulses while CIA director but he obviously has the president’s confidence and has no evident disqualifiers in his background.

“His confirmation provides a much-needed opportunity for reinvigorating the role and place of the State Department in the making of foreign policy, which suffered terribly under Secretary Tillerson.

“There is, of course, risk that Pompeo, along with new National Security Advisor John Bolton, will enable the president’s impulses, instead of offering up to him measured, realistic options that credibly advance the national interest.”

Barbara Slavin, director of the Future of Iran Initiative:

“As a congressman and CIA director, Mike Pompeo has been extremely critical of the Iran nuclear deal. However, I believe his perspective may change as secretary of state. He has allowed Policy Planning Director Brian Hook to continue conversations with Europeans about a supplemental understanding on the Iran nuclear deal. And Pompeo will be meeting, starting tomorrow in Brussels, with US allies that are firmly committed to the landmark non-proliferation accord.

“During his confirmation hearings, Pompeo expressed support for diplomacy on the Iran issue. He should build on the Joint Comprehensive Plan of Action and join with Defense Secretary James Mattis to convince Trump to stick with the deal and renew US nuclear-related sanctions on May 12.”