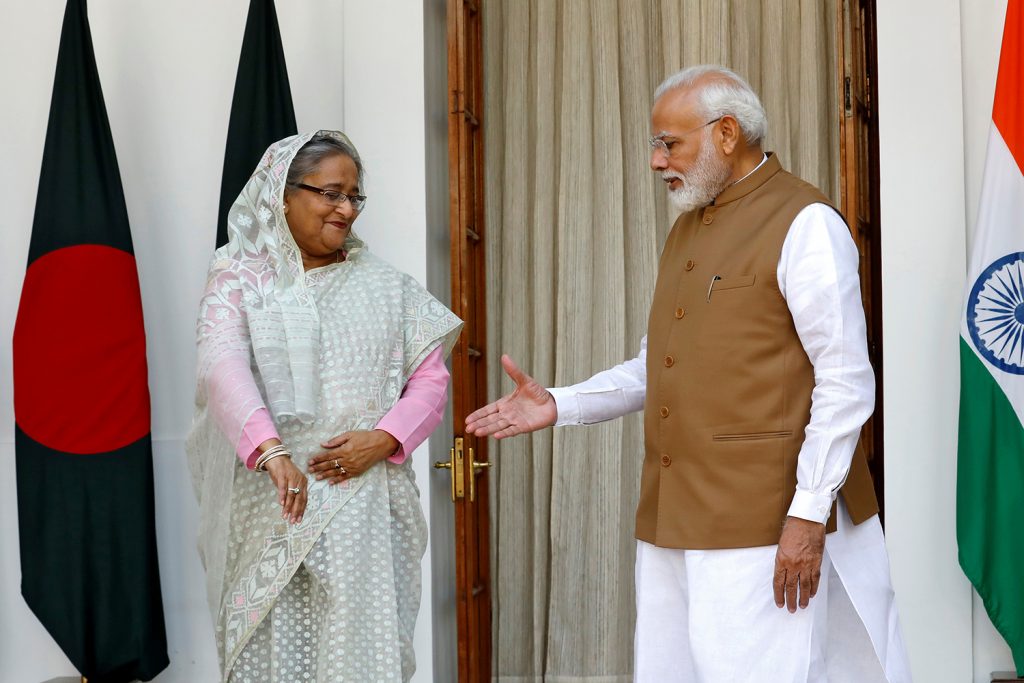 Bangladesh’s decision to cancel the public celebration event of ‘the Mujib centennial’ due to public health concerns after the detection of three cases of coronavirus in the country is a welcome development and deserves appreciation, but it has also saved the government from a political embarrassment. The centennial of Sheikh Mujibur Rahman—the leader of the nationalist movement which established independent Bangladesh in 1971—was planned by the government headed by his daughter, Sheikh Hasina. The government declared the year beginning March 17 “the Mujib Year.”

The inaugural public event was supposed to be attended by several international dignitaries, including the Indian Prime Minister Narendra Modi. Modi’s visit became a controversial issue and provoked large-scale demonstrations and protests in Bangladesh. In the past week, left wing political parties, Islamists, some members of civil society, and students demonstrated and demanded that the government of Bangladesh withdraw the invitation. Protesters had planned further demonstrations in the days ahead of Modi’s arrival at Dhaka.

The large-scale demonstrations against Modi and scathing criticisms of the invitation have surprised many observers outside the region. The governments of Bangladesh and India have described the current relationship as in a “golden era.” Modi’s previous visit to Dhaka in 2018 caused no such reactions. Such massive protest against an Indian prime minister’s state visit in any country was unprecedented. This reaction in Bangladesh should give a pause to the Indian government. Although spurred by recent events in India, Bangladesh’s domestic political environment and the widespread perception of the Bangladesh-India relationship undergirded these protests. The cancellation of the event and Modi’s visit will push the issue out of the news cycle, but ignoring it will be a mistake. Instead, it provides both Bangladesh’s ruling Awami League and the Indian policymakers an opportunity to assess the underlying aspects.

The opponents of the visit highlighted the recent actions of the Modi government against the Muslim community in India, including the National Registry of Citizens (NRC) and the Citizenship Amendment Act (CAA) as the reasons for their campaign. Violence against Muslims in Delhi by the BJP activists in February galvanized last week’s protests in Bangladesh. The Indian government repeatedly assured that the NRC and CAA will not affect Bangladesh, but such assurances have not convinced Bangladeshis, as there are reports of Indians migrating to Bangladesh in fear of being persecuted and the virulent rhetoric of BJP leaders that ‘illegal migrants’ are from Bangladesh; BJP leaders have described them as ‘termites’ and threatened to throw them in the Bay of Bengal. Bangladeshi officials have echoed the Indian position that the NRC and CAA are India’s internal matter, yet their discomfort is palpable as Hasina commented that ‘it was not necessary,’ and Bangladesh cancelled trips of several ministers since the passage of the CAA and Delhi violence.

In the wake of these protests, the ruling Awami League doubled down on the invitation and the Secretary General Obaidul Quadir said that, “refraining from inviting the Indian prime minister would have been an act of ingratitude.” The ruling party and their supporters have alleged that their opponents are trying to disrupt the “Mujib Year.” Criticism of Mujib has become a sensitive issue since Hasina returned to power. The draconian Digital Security Act (DSA), enacted in October 2018, has made “negative propaganda” about Sheikh Mujibur Rahman a punishable offence. Several people have been arrested under the law in the past year.

Many protestors had couched their opposition in language which they hoped would appeal to Mujib’s daughter and protect them from being labeled as “anti-government,” a potentially dangerous label. They insisted that Modi’s divisive communal politics are inconsistent with the secularist ideals of Sheikh Mujib. It failed to sway the government. Tying the criticism to Mujib’s ideals to avoid persecution is a testimony to the remarkable shrinking space for dissent in Bangladesh.

Since the 2014 election—boycotted by opposition—the country has taken a turn to electoral authoritarianism. The 2018 election—described by The New York Times as “farcical” and The Economist as “transparently fraudulent”—  exacerbated the situation as freedom of press and assembly has diminished, opposition has been neutered, and extrajudicial killings and enforced disappearances have skyrocketed. The government and the ruling party activists have previously ruthlessly quelled grass roots movements such as the road safety movement in 2018. In the absence of a robust opposition party which can take on the government, issue-based social movements have become the means to vent resentment against the government. The demonstrations against Modi’s visit were in part fueled by this domestic political environment. Many Bangladeshis view the invitation as an unqualified endorsement of India by the Hasina regime. Expressing criticisms of India has become perilous. Last October, an engineering student was tortured to death in his university dormitory by student activists from the ruling Awami League after posting a comment on Facebook critical of the agreement signed between India and Bangladesh during Hasina’s visit to India.

The widespread perception that the relationship between these two countries have become unequal and that Bangladesh had given more to India than it had received is bolstered by unresolved issues between the two countries. Killing of Bangladeshi civilians on the India-Bangladesh border has increased three-fold to forty-one in 2019 despite repeated promises of the Indian authorities to the contrary. In the past five years, 158 Bangladeshis have died in the hands of the Border Security Force. Recent claims by the Indian foreign secretary that the killings are of equal numbers of Indians and Bangladeshis is not borne out by facts and has irritated Bangladeshis further. A water sharing treaty for the Teesta river—supposed to be signed in 2011—has yet to see the light of day. Bangladesh, however, has allowed India to withdraw water from the Feni River. Since Hasina came into power, Bangladesh has allowed India to transit its goods through Bangladesh and permitted transshipment of Indian goods via Bangladeshi seaports without charging customs duties and transit fees. Bangladesh has enabled Delhi to set up coastal surveillance system radar in Bangladesh in the Bay of Bengal. India’s support to Myanmar on the Rohingya crisis, however, does not augur well with Bangladeshis.

Recent demonstrations in Bangladesh against Modi’s visit speak volumes, literally and metaphorically. Instead of dismissing them as a conspiracy, both countries will be better served if their policymakers listen and take this opportunity to reassess their relationship and the domestic political environment in Bangladesh.

Assessing the treatment of Rohingya refugees in Bangladesh

Bangladesh must honor its responsibility to care for Rohingya refugees, and that the international community must do more to hold the government accountable while providing additional financial and logistical support to enable it to do so.