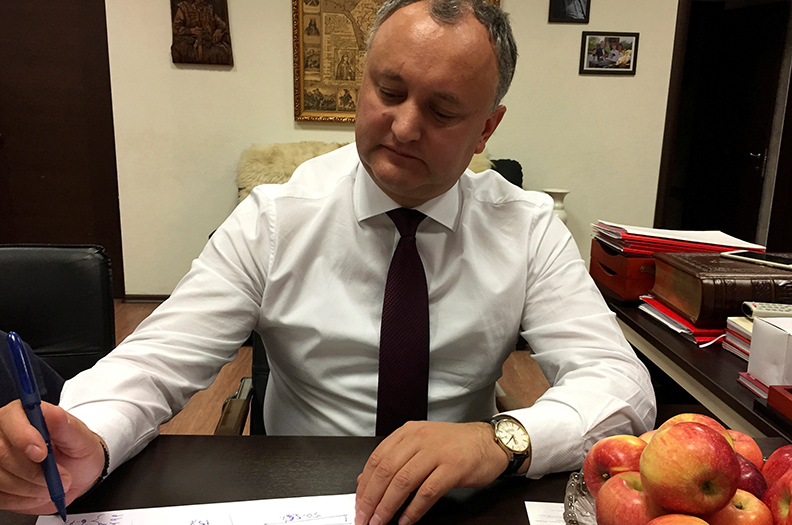 Igor Dodon, leader of the pro-Kremlin Party of Socialists, is a frontrunner in Moldova’s presidential election, which takes place on October 30. (Reuters/Matthias Williams)

Moldova will hold a historic presidential election on October 30 that could determine whether this country of less than three million tilts toward Europe or Russia.

It is Moldova’s first presidential election in twenty years in which voters will get to directly decide the outcome. In March, a court ruled unconstitutional a revision of the constitution in 2000 that called for indirect election of the president through parliament. Under the revised presidential election process, if no candidate receives 50 percent plus one vote on October 30, a runoff will be held between the top two vote getters on November 13.

The leading presidential candidates are Igor Dodon, leader of the pro-Kremlin Party of Socialists, a member of parliament and a former economy minister in a Communist Party-led government a decade ago; and, Maia Sandu, a Harvard-educated former education minister in a pro-European government from the newly-formed Action and Solidarity Movement. Marian Lupu, the one-time acting president, parliamentary speaker and another former Communist government economy minister who now represents the Democratic Party, withdrew from the race just this week in a tactical move to throw his support to Sandu as a fellow pro-European. This should help Sandu in the first round as well as the second round, if there is one.

Moldovans are fed up with tepid economic growth—projected by the World Bank to be just over two percent in 2016—and corruption.  According to a recent poll conducted by the International Republican Institute, a US-based democracy nonprofit organization, 82 percent of respondents held the view that Moldova is on the wrong track and 78 percent that Moldova needs “serious structural and systemic reforms.” About 90 percent of the respondents cited corruption as a major issue. IRI’s poll, which was conducted earlier this fall, reveals that Moldovans are motivated to do something about their dissatisfaction with almost nine in ten somewhat or very likely to vote on October 30.

Andrei Nastase, a leader of Dignity and Truth, the movement channeling Moldovans’ impatience with crooked governance, dropped out of the race earlier in October. He is supporting Sandu. Surveys indicate that his supporters are right there with him in supporting the former education minister.

Iurie Leancă, a respected European-oriented former prime minister who led Moldova’s signing and implementation of the European Union Association Agreement, is running as the leader of the European People’s Party. Nevertheless, he is polling in the single digits and is not expected to make the November runoff.

Unfortunately for Leancă, he, like Lupu, is associated with what many in Moldova consider to be a time of dysfunctional, chaotic, unethical behavior in government when around $1 billion—a particularly enormous sum in tiny Moldova—disappeared from three Moldovan banks resulting in the eventual imprisonment of former Prime Minister Vlad Filat.

IRI research points to Dodon and Sandu advancing to the November 13 runoff.  IRI’s September polling places Dodon at about 30 percent; Sandu at 13.5 percent; Nastase at 13 percent; Lupu at about 12 percent; and, Leancă in the low single digits at three percent.

At this point, Sandu could be at an advantage because Moldovan democrats, as has been their tradition at the local level, tend to rally around the pro-European candidate and Sandu is perceived that way without the baggage of serving as head of state or government during the bank scandal like Lupu and Leancă.  Lupu is also saddled with his association with Democratic Party leader and local oligarch, Vlad Plahotnuic, who is viewed negatively by many Moldovans as a face of official corruption.

Dodon is on track to win a plurality on October 30, followed by Sandu whose vote totals should be strengthened by Nastase’s withdrawal and subsequent endorsement. In addition to Nastase’s support, both Lupu and Leancă supporters are expected to rally around Sandu—as they have in the past—and, at the very least, make the runoff competitive, if not victorious for Moldova’s democrats.

However, head-to-head matchups at the moment between Dodon and Sandu show Dodon with an edge; so, Sandu has work to do to create a democratic coalition to defeat Dodon who, while relatively popular now, was defeated in a June 2015 Chișinău mayor’s race when democrats coalesced around incumbent mayor, Dorin Chirtoacă.

Twenty years ago, then-Parliament Speaker Petru Lucinschi defeated incumbent Mircea Snegur in a direct election runoff when the geopolitical situation was considerably more consensus-driven and Russia on its heels, recovering from almost seventy-five years of Soviet misrule. Now, as Russia grasps for past glory and attempts to dominate sovereign countries in its near abroad, Moldova’s direct election of a president has become particularly consequential—for Moldova’s neighbors, Europe and, importantly, its people.

Michael Getto is an international public affairs consultant with Wooden Horse Strategies and is based in Kyiv, Ukraine.  He served as Moldova country director for the International Republican Institute from 2004 to 2007 and advised on Moldova’s privatization and economic reform in 1993 to 1994.