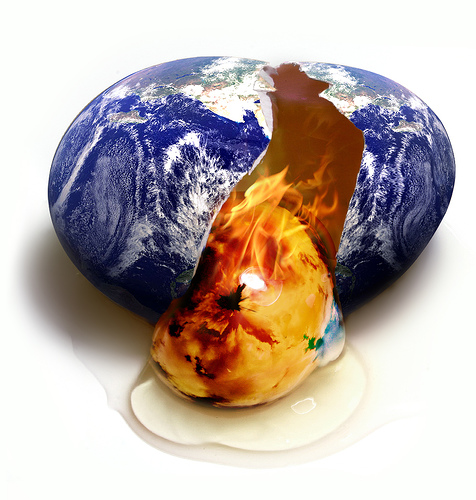 It used to be that nothing in life was certain except death and taxes. Then came climate change.

The news on the climate has gone from bad to alarmingly urgent. The atmosphere is warming faster than previously thought. The obvious culprit is economic development – our particular path to prosperity has been paved with carbon. This has led us to multiple ecological tipping points, diminishing the Earth’s ability to tolerate, absorb or cleanse additional pollutants in the air, land and sea. An overdose of carbon and other greenhouse gases has already damaged our health, our weather, and our food supply.It’s now threatening our finances, production processes, travel habits, and even how we structure our communities.

There is good news – but it’s rather muted, given the scope and scale of the problem. First, the public discourse on climate change is shifting from recognition of the problem to increasingly informed debate about the solutions. Companies are investing in renewable and cleaner forms of energy, and urging governments to create incentives for more. Public figures urging action to halt climate change read like a who’s-who of the 21st century: Al Gore, Sir Nicholas Stern, GE CEO Jeffrey Immelt, former German foreign minister Joschka Fischer, Chinese president Hu Jintao. Governments are responding to the financial crisis with ‘green’ stimulus plans. And on April 24th, the UK government presented the world with a whole new paradigm for thinking about climate change: a national carbon budget.

The seminal question seems to be: can we do it? Can human civilization – not just governments, not just a subset of nations, but humanity as a whole – change behavior substantially and rapidly enough, to make climate change manageable? Indeed, how will we even know if our efforts are good enough?

The physics of the problem…

According to the UN, human activity is pumping 32 billion tons of carbon into the air every year. About 15 billion tons, or just under half, stays in the atmosphere, trapping the sun’s energy as heat and increasing the carrying capacity of the atmosphere for more pollutants. The rest is absorbed – about half by the ocean, another third by tropical forests, and the rest into soil and plants.

Over-heated air is melting of the polar ice caps, inducing negative feedback loops for more warming. One particularly damaging loop is the air-ocean interface. In recent testimony before the US Congress, former vice president Al Gore cited US Naval Postgraduate School researchers, who expect the Arctic ice cap to melt entirely in the summer as early as 2014, with current emission levels. The newly exposed dark sea absorbs 90% of the solar heat that was previously reflected off the white ice. One consequence is that the vast swath of carbon frozen in the Arctic permafrost could be released, potentially doubling the global warming pollution already in the atmosphere.

Forest sinks are also at risk. According to the Union of Forest Research Organizations and its international partners, the carbon-regulating service provided by trees “could be lost entirely if the earth heats up 2.5 degrees Centigrade.” Dying trees in Canada and the US are now contributing CO2 to the atmosphere, rather than absorbing it. Forests in Asia, Africa, Siberia and the Amazon are also threatened.

The unavoidable fact – and increasingly inconvenient truth – about the climate is that it’s changing more quickly than the human behavior that induced it. A few years ago the scientific consensus was that capping carbon at 550 ppm (parts per million) would stave off the most damaging effects of climate change. Then number was revised to 450. It now seems to be somewhere below 400 and falling – while the carbon content in the air is 380 and trending upward.

…vs. the politics of the solution

So can humanity rise to the challenge? Much can be accomplished with energy efficiency, conservation, carbon cap & trade and/or carbon tax, four areas which could deliver high impact, low cost results using today’s technology. What’s been lacking has been the political will to create binding international targets, which will provide the legal certainty businesses need to invest.

That’s why so much is riding on COP 15, the critical inter-governmental meeting on the post-Kyoto regime in Copenhagen this December. The sequence must be: binding international standards, government-supported incentives, corporate investment and concurrent widespread/grassroots efforts to create more planet-friendly lifestyles.

UK’s carbon budget – the world’s first – was a major step in the right direction. It covers three five-year periods from 2008-2022, with a commitment to reduce emissions 34% below 1990 levels by 2022. The reduction will rise to 42% if a deal is reached in Copenhagen. The concept of a budgeting carbon over this time span has merit: it creates a lasting market in which investors and producers can converge, knowing that demand will endure over the long term.

Less clear is whether the UK’s plan is sufficient to achieve its goal of a 34% reduction. This is the same problem facing the planet as a whole: how much is enough? Or put another way: if the problem is physical and the solution is political, how will we know if we’ve got it right?

We will only know with certainty when the ecological tipping points, start tipping back. In other words, governments ultimately need to be accountable to science. To help de-politicize this process, the EU and US should propose a special panel of economists and scientists to work adjacent to and in tandem with the IPCCC. These independent professionals could draw from the UN, the Stern Report, the EU ETS, and the best minds in the academic and NGO communities to provide metrics, oversight and monitoring of nations’ attempts to lower their carbon emissions. In addition to assessing the data they should advise on best practices and suggest course corrections where necessary.

Of course the major concern is enforcement. Failure of one or two states to abide by their carbon-reduction requirements could induce others to go lax. The knock-on effect could be devastating for humanity. All incentives must be on the table to keep countries on track. After all, nature doesn’t do bailouts.

Nothing in life is certain, except death, taxes, and climate change. But with progressive, thoughtful leadership, climate change at least can be transformed into something we, and the next generations, can live with.