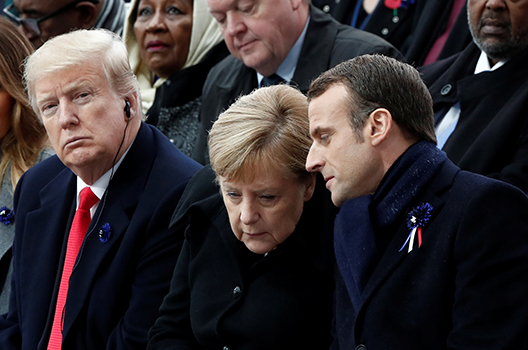 The transatlantic alliance, a pillar of the post-World War II international order, is living through difficult times. Many of the current tensions between the United States and Europe — though certainly not all — have been caused by US President Donald J. Trump’s statements and policies. By considering the withdrawal of the United States from NATO, imposing tariffs on European imports, calling the European Union (EU) a “foe,” and reneging on his commitment to keep US troops in Syria, Trump has not only sparked tensions between the United States and its European allies, he has also triggered concerns over whether he would honor Washington’s security commitment toward them. At the very least, he lacks the trust of large parts of the European public to do the right thing on the international stage.

In the wake of these developments, some Europeans are debating whether the EU and its member states should pursue a path of strategic autonomy, which would include greater independence from the United States in its foreign and security policies. An October 2017 commentary in the liberal German paper Die Zeit called for a “post-Atlantic” foreign policy. A year later, German Foreign Minister Heiko Maas advocated for reforming Europe’s relationship with the United States, including acting as a counterweight when the United States crosses red lines.

Given the current political and structural realities in Europe, however, this quest will likely remain all talk.

For European strategic autonomy to be achievable, all members of the EU would actually have to support this goal, which is not the case. Central and Eastern European EU members, traditionally more concerned about threats from Russia, are vocally opposed to weakening the security partnership with the United States. In a recent interview, Latvian Foreign Minister Edgars Rinkēvičs said that if Europe sought to create its own army, “there would be very legitimate questions from the United States: ‘If you need your own army… then we can go home.’ That’s exactly what we don’t want.”

If the most ardent proponents of European strategic autonomy aren’t yet dissuaded by these political challenges, they should consider the geopolitical realities of the EU’s security environment without NATO. Next to the real and perceived security challenges posed by Russia on its eastern flank, the EU shares a border with Turkey (a NATO member), with which Brussels already now has a testy relationship. The United Kingdom, meanwhile, still parades one of the most powerful European militaries and will soon be outside an EU-wide security community. After Brexit, 80 percent of NATO defense spending will come from non-EU members of NATO.

A different kind of strategic autonomy

Thus, the maximalist vision of European strategic autonomy will likely remain a mirage.

Yet, there is another way of defining European strategic autonomy that both NATO, the EU, and the United States can and should rally around. Better EU cooperation on the procurement of military equipment would make European defense spending more efficient, thereby heeding the US demands for greater burden sharing. According to the European Commission, lack of coordination between EU member states on defense spending is costing them between €25 and €100 billion annually. As noted by US Sen. Lindsey Graham (R-SC), enhanced EU cooperation could increase NATO’s ability to swiftly move troops between EU member states. Over the longer run, enhanced EU security cooperation could enable it to jointly act in its neighborhood, such as North Africa, in cases in which US interests are limited and joint NATO action isn’t warranted.

Such an approach could be a stepping stone toward a new and more equitable transatlantic bargain for the twenty-first century.

Moritz Luetgerath is the research assistant to the president and CEO of the Atlantic Council.