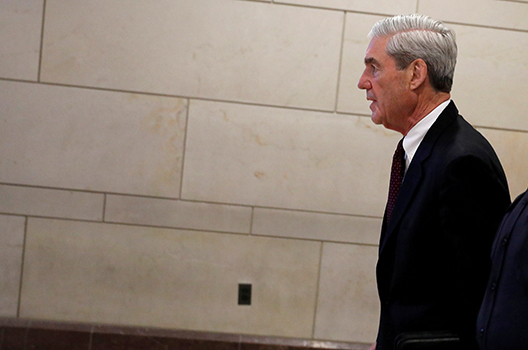 Special Counsel Robert S. Mueller III’s long-awaited investigation has not found adequate evidence to prove US President Donald J. Trump or any of his aides colluded with the Russian government’s interference in the 2016 election. The investigation did not determine “one way or the other” whether Trump had illegally obstructed justice, according to a letter delivered to Congress by US Attorney General William Barr.

Barr made a summary of Mueller’s findings public on March 24.

“The investigation did not establish that members of the Trump Campaign conspired or coordinated with the Russian government in its election interference activities,” Mueller wrote in the findings released by the Justice Department.

Barr quoted Mueller as writing: “While this report does not conclude that the president committed a crime, it also does not exonerate him.”

The Mueller investigation has cast a shadow over the Trump administration for the past two years. We asked Atlantic Council analysts for their thoughts on what Mueller’s findings mean for Trump’s foreign policy, the US standing on the world stage, and the US-Russia relationship. Here’s what they had to say*:

“It’s good news for the stability of American democracy that the Mueller investigation did not find evidence of President Trump or his campaign conspiring with Russia’s 2016 election interference. This eases pressure on US constitutional order in a few ways. It appears to sidestep the worst-case scenarios involving an American president compromised by and working for the Kremlin, while also taking steam out of the impeachment train — although these tentative implications could still change considerably as more information comes to light from the comprehensive Mueller report.

“Mueller also did American politics a historic service, both by completing a rigorous investigation of a sitting president and by elevating the standard for using the legal system to contribute toward any initiative to remove a president from office (offsetting some of the damage inflicted by the lower standards contemplated in the past, from the Starr report to chants of “lock her up”).

“However, whereas US domestic political stability is strengthened, geopolitical risks may be rising, particularly with respect to Russia. While it remains indisputable that Russia attacked US democracy and continues to do so, Americans may now feel increasingly fatigued about the urgency of this threat, a relaxation that itself brings a number of risks. It increases the chances that Russia will continue undermining Western democracies, as the United States and its allies have failed to push back with sufficient costs or countermeasures and now may be seen as even less willing to do so.

“Moreover, while Trump still does not have an entirely free hand with respect to setting US-Russia policy, Mueller’s findings may grant him some degree of flexibility. Putin, who already knows that his and Russia’s long-term relative power prospects are bleak, could see this as an opening between now and the 2020 election to advance his own perceived strategic interests or possibly find new ways to support Trump’s reelection chances.

“Together with Trump’s eagerness to be seen making deals and his unwillingness to push back against Putin, the environment is ripe for geopolitical movement with Russia heavily influencing the agenda.”

“The consequences are multiple. Since Attorney General William Barr did not offer any real report, there is no closure. Presumably this will mean that Washington will discuss little else for the next two years.

“The Democrats now control the House of Representatives, which gives them the opportunity to call for all kinds of action. Meanwhile, different law enforcement agencies are continuing their many criminal investigations resulting from the Mueller investigation.

“US foreign policy is likely to continue to be a combination of wild improvisations by Trump and the administration will have little capacity for dealing with foreign policy, both of which are likely to destabilize the global order.”

“The Mueller report conclusion that evidence did not demonstrate the president and his campaign coordinated with Russia in its attack on the 2016 elections seems to settle one outstanding question about the President Trump’s obsequiousness toward Putin. That very deference to a man determined to undermine Western democracy remains baffling, especially since the president remains so massively divorced from his own administration’s policy with respect to Russia.

“I fear that getting what he will deem a clean bill of health will embolden Trump to take a more aggressive line to appeasing Russia now that the proverbial shackles have been lifted. Congress will need to monitor the administration’s policy execution and be ready to stand up for democratic ideals and principles in countering Russian aggression when the president will not.”

*This is a breaking news story. Please check back for updates.