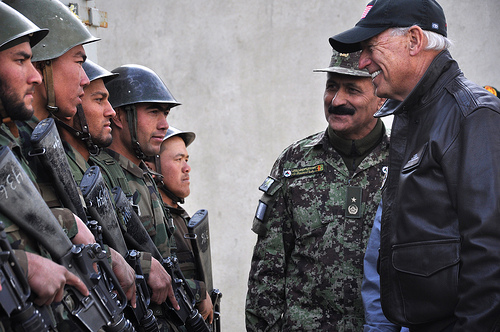 While helping Afghanistan overcome its security deficit is essential for the Afghan people, it’s also vital for the United States. The recently released National Military Strategy declared that “security and prosperity are inseparable. . . . In this interdependent world, the enduring interests of the United States are increasingly tied to those of other state and non-state actors.”

As President Obama declared in last month’s State of the Union address, “Our purpose is clear: by preventing the Taliban from reestablishing a stranglehold over the Afghan people, we will deny al Qaeda the safe-haven that served as a launching pad for 9/11…the Afghan Government will need to deliver better governance, but we are strengthening the capacity of the Afghan people and building an enduring partnership with them.”

Since 2001, the United States has been actively exporting security. There are security relationships with almost every country in the world. Using defense, diplomacy, and development, the United States seeks to reduce security deficits around the world. Allies increasingly want this assistance and countries suffering from internal strife increasingly need it. This is true from Albania to Yemen.

And our allies are actively engaged with this strategy. There are now 50 countries working with the Afghan government to build schools, ignite commerce, and provide security. Whether it is Swedes in Mazer-e-Sharif, Italians in Herat, Poles in Ghazni, or Turks in Lashakar Gah, international support for Afghanistan is clear. American partners fill key niches such as police training, combat medical care, or helicopter maintenance.

And the partnerships are growing.

Latvia and Lithuania recently joined the NATO Training Mission Afghanistan, which is responsible for developing the Afghan security forces. This is positive. In November 2009, there were just two countries providing 30 trainers. Today, there are 32 countries providing 1,300 trainers. There is still a short fall in the number of trainers, but countries increasingly recognize that training Afghanistan’s police and military is essential to long-term stability in Afghanistan. When we discuss transition by 2014, it is transition to the Afghan government and the Afghan national security forces.

To make up for decades of civil war in Afghanistan and a post-2001 economy of force effort, there are 50 countries working with Afghans every day to give them the tools to assume control for their development and security. And it is cost effective—Afghan forces operate at just one tenth the cost of American forces. And this is key to the transition plan.

Through partnership, the international community is helping Afghanistan create a bulwark between Afghans who want their children to be safe and the insurgents who want to deprive them of their right to choose their own destiny. Secretary Gates made this clear during recent testimony. “We’ve all recognized from the beginning that being able to turn security over to the Afghan forces against a degraded Taliban is our ticket out of Afghanistan.” It’s essential we remember this to ensure the Afghans have the training and resources to be successful.

Derek S. Reveron, an Atlantic Council contributing editor, is assigned to NTM-A; his latest book is Exporting Security: International Engagement, Security Cooperation, and the Changing Face of the U.S. Military. He is currently on leave from the Naval War College. Photo credit: Flickr.