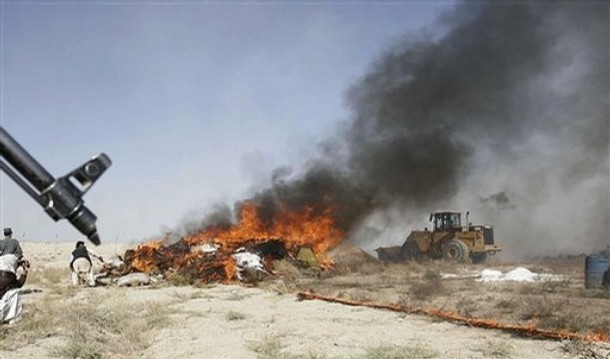 General John Craddock, head of NATO forces, announced Sunday that attacks on drug lords and labs in Afghanistan will begin within the “next several days.”

NATO defense ministers, during a meeting last fall in Hungary, authorized troops in Afghanistan to launch the drug attacks, but there had been questions about whether allies would be willing to follow through. Money from Afghanistan’s booming illicit drug trade has been blamed for pumping up to $100 million a year into the coffers of resurgent Taliban fighters.

“Activities and actions will occur soon that will be helpful,” Craddock told reporters. “We’ve got to get started.”

The U.S. delegation to the security conference, led by Vice President Joe Biden, was expected to talk to allies this weekend about the ongoing need for support in Afghanistan. Craddock said he still needs about 5,000 NATO troops to bolster Afghan forces during the coming elections, and he is confident he will get them from other NATO nations. At the same time, he said he still has a critical need for trainers that he has yet to fill, and the expected announcement about a forthcoming build-up in U.S. forces has been delayed as the Pentagon juggles the numbers in the face of an ongoing review by the new Obama administration. Allies, said Craddock, “expected they would be asked to step up and do more. Now it’s a matter of political will.”

Leaders have speculated that good will surrounding the inauguration of President Barack Obama would generate greater efforts by NATO allies to send additional resources to Afghanistan. Pentagon officials have said they expect to send as many as 30,000 more troops there, including several brigades in the coming months.

Unfortunately, opium production is not only the key funding source for Taliban militants but the chief means of eeking out a living for Afghanistan’s people.  It’s not at all clear how one targets the former without harming the latter.  Perhaps subsidy payments will be made?

As for troop increases, the goal for European support is modest indeed.  The United States has pledged an additional 30,000 and is begging for all other NATO members combined to come up with a fifth of that?  And France — which has graciously agreed to rejoin NATO’s command in exchange for heading up two plum posts —  yesterday announced its refusal to send more, contending that it’s token 3,300 troops in theater constitutes having “already made a considerable effort.”

That’s not quite the sharing the heavy lifting that Secretary General Jaap de Hoop Scheffer has called for.