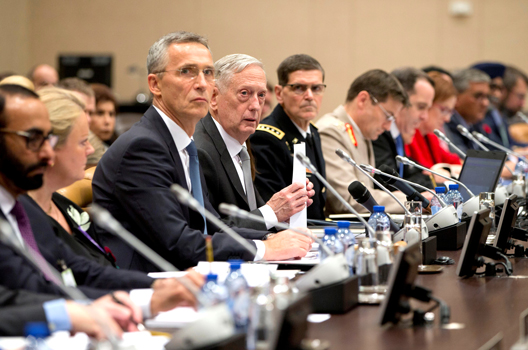 US Secretary for Defense Jim Mattis and NATO Secretary General Jens Stoltenberg are seen prior to the opening address during a round table meeting of NATO defence ministers and the Coalition to Defeat the Islamic State at NATO headquarters in Brussels, Belgium, November 9, 2017. (REUTERS/Virginia Mayo/Pool)

BRUSSELS – The expected nod by allied defense ministers on June 7 for a new “readiness initiative” to deter aggression against NATO’s home territory will set in motion a reactive capability that the Alliance has not seen since the end of the Cold War, according to allied officials.

“This is big stuff, it involves no little expense and it’ll take time to roll out,” one allied diplomat said on June 6. “But roll it out we must if we’re going to erect a credible deterrence.”

At issue is a US-hatched plan to enable the deployment of substantial troops and assets should NATO’s four rotating battalions along its eastern border need back-up. Technically, the allies’ 40,000-strong rapid reaction NATO Response Force would be the first wave of reinforcement, but officials avow that would not be enough in a serious crisis situation.

Asked if all twenty-nine NATO countries would be expected to participate in the plan, NATO Secretary General Jens Stoltenberg told reporters on June 6 that “each ally should contribute to this initiative, though the contributions will vary. It is about creating a culture of readiness because we have a more unpredictable security environment.”

Noting that the initiative’s land components could involve as many as 30,000 troops, Stoltenberg said the defense ministers will review possible locations for the components’ commands during their meeting though no decision will be taken on that until later this year.

According to allied diplomatic sources, there will be special emphasis on rebooting the allies’ maritime reactive posture—and not just in NATO’s high north Baltic and Arctic Sea regions, as during the Cold War.

“The readiness issue means making NATO’s maritime task forces more flexible and capable, with a better sharing of maritime surveillance [data] and exercising them more with a Russian focus, which includes the Mediterranean basin,” one source said.

Russia’s naval activity in the Mediterranean has increased significantly in recent years after Moscow began using Syria’s naval facility at Tartus in 2015—an arrangement firmed up in January 2017 with a forty-nine-year lease granted by Damascus.

The readiness initiative will be music to the ears of NATO’s eastern allies, and particularly to Warsaw. If the latter had its way, the initiative would probably be called “the US Defense of Poland” plan, given Warsaw’s late-May offer to Washington of $2 billion to cover and maintain the cost of a US military base on its territory.

Asked to comment on that offer, Kay Bailey Hutchison, the US ambassador to NATO, said it was not up for consideration in Washington.

“There has been no action taken on this,” she said on June 6. “There are no [US] plans for a permanent new base in Poland.  This would entail many considerations such as our NATO treaty obligations, or where our military would want to have more troops, and whether they’d be permanent or rotating. But it is not on the table.”

For example, NATO officials are tight-lipped about when concrete decisions will unfold to actually implement the initiative. They also decline to say how long its achievement will take.

Moreover, the thirty-day notice does not mean that the forces would have to deploy by then, only that they be ready to deploy by that time. Thus, a political decision to actually deploy could follow much later.

That leads to another unknown: cost. Issuing the notice but then delaying the political decision to deploy beyond thirty days would entail a lot of additional expense. Any such military mustering notice is essentially a standby arrangement, and standby status in the military is costly in terms of extra pay for soldiers, higher maintenance levels, and putting contracted private-sector support on standby as well. All those costs would have to be borne at national level since no NATO common funding will be used to finance the initiative.

Few, if any, of the United States’ allies will dare raise the cost argument, though, as they brace for another dressing down by US President Donald J. Trump at the July summit.

As one NATO insider put it, “no one can pretend that the issue of burden-sharing is not at the front of Trump’s mind. There are certain allies that will get it in the eyeball [from him] during the summit.”

Indeed, the ally that is most in Trump’s sights is Germany. The country’s perennial trade surplus with the United States is a big thorn in Trump’s side—and one that he cannot reconcile with Germany’s low defense spending.

Berlin has agreed to raise the country’s defense budget from 1.1 to 1.3 percent of GDP, while Germany Chancellor Angela Merkel hopes to push it to 1.5 percent. But even that would fall well under NATO’s 2-percent-of-GDP spending guideline.