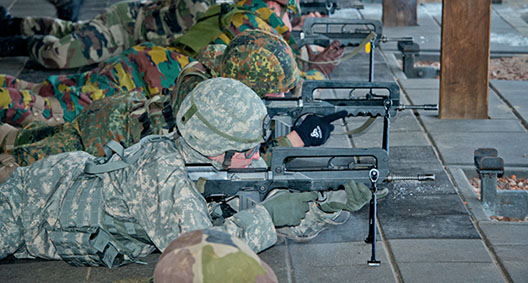 Russia’s assaults on Ukraine this spring are about to revive an old idea within NATO that has not been in vogue since the Cold War: conventional deterrence .

Russia’s ready use of military force in Ukraine, Georgia and beyond puts its non-NATO neighbors very much at risk of military intervention. President Putin’s fracturing of the region’s post-Cold War stability includes the use of covert agents to stage unrest and create excuses for Russia to intervene in the supposed defense of Russian-speaking minorities. Could Moscow apply the same measures in a NATO country with a significant Russian minority population such as Latvia? This question will keep NATO leaders up at night. The answer in the morning will be conventional deterrence.

Why? A superficial balance-of-power approach would say that Russia will not try to extend these intervention tactics to NATO members. It might note that the continued nuclear balance still lends some stability to the Russia-NATO relationship, and that NATO defense budgets easily dwarf Russia’s.

When it comes to risk perceptions, the relevant comparison may not be between Russia’s defense budget (about $68 billion according to the Military Balance) and the US budget (about $600 billion), but between Russia and the aggregate defense budgets of Estonia, Latvia and Lithuania (about $1.2 billion). Distributed on the ground, Russia’s conventional advantage in the Baltic states region is clear.

In the 1980s, strategic debate within NATO was all about the force-to-space ratios needed on German soil to resist the weight of Soviet conventional forces. These debates now will revive for the Baltics and beyond, altered by the new geography of NATO, including the Baltic and Black seas. Only a sufficient conventional deterrence, can make sure Russian decision-makers do not develop a perception that they could be able to cross into NATO territory without being seriously penalized. The credibility of deterrence rests on the actual ability to interdict and punish any challenger.

Dr. Henrik Breitenbauch is a senior researcher with the University of Copenhagen’s Centre for Military Studies, and a nonresident fellow at the Centre for Transatlantic Relations, SAIS, Johns Hopkins University.