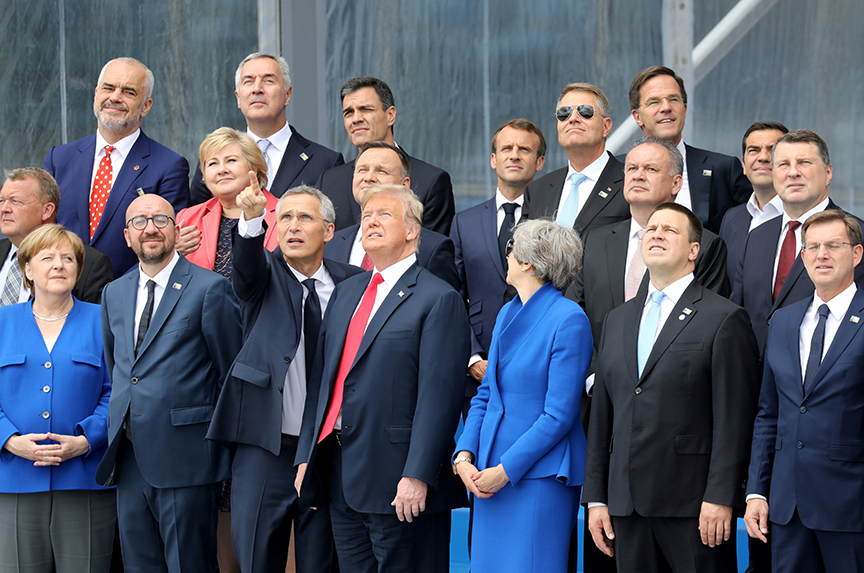 On April 4, NATO will mark the 70th anniversary of the signing of the Washington Treaty, which laid the foundation for arguably the most successful alliance the world has ever seen. Yet despite all of its successes, many forget that NATO never had it easy. Throughout its long and venerable history, the Alliance not only had to address numerous external challenges and balance internal interests, but also take bold initiatives when the security of its member states was at stake. Therefore, at a time when some observers argue that the Alliance is facing various pressures, it is useful to put things into perspective, remember some of the earliest challenges NATO had to overcome, and draw some lessons from history.

The Alliance was born in a dangerous and unforgiving environment. Barely five months after the founding of NATO in 1949, the Soviet Union succeeded in detonating its first nuclear bomb. A year later, Moscow joined the proxy war in Korea. To NATO these were ominous signs, which suggested that the Soviets might try to invade Western Europe next. Worries were further exacerbated by the fact that NATO had only twenty-five divisions in Europe whilst, according to some estimates, the Soviet bloc had 150 readily available divisions. These Soviet divisions, it was thought, outperformed NATO in nearly every category of manpower and conventional weaponry.

This sense of anxiety, however, did not last long. As soon as the perceived threat of a Soviet invasion diminished, the first allied disagreements came to the fore. Following the death of Soviet leader Joseph Stalin in 1953, allied views began to differ on whether a peace agreement with the Kremlin’s new leadership should be pursued. Just three years later, even greater divisions burst into public view when the United Kingdom and France found themselves at odds with both the United States and the Soviet Union during the Suez Crisis.

Shortly after the Korean War ended, the issue of uneven burden sharing entered NATO’s agenda. As part of his “New Look” policy, US President Dwight D. Eisenhower sought to reduce the US military footprint abroad and curb defense spending. To this end, he increased NATO’s reliance on nuclear weapons as they offered a cheaper deterrence alternative than conventional forces, and, also urged Europe to increase its contribution in defense spending, stating that the “American well had run dry.”

Yet, the challenges of the 1950s paled in comparison to what the next decade had in stock. In 1962, during the Cuban Missile Crisis, the United States and the Soviet Union came to the brink of a nuclear exchange. Although the incident had limited impact on NATO, a number of allies such as the French and the West Germans became increasingly frustrated about Washington’s reluctance to share details about its dealings with Moscow. At the same time, a general feeling began to emerge that the security of Western Europe did not rest in the Europeans’ own hands, but stood at the mercy of the two competing superpowers.

Possibly the greatest blow to the Alliance came in 1966, when, following a prolonged series of disagreements on the future course of NATO, then-President Charles de Gaulle took the decision to withdraw France from NATO’s military command. The timing of this withdrawal was very unfortunate as, according to Article 13 of the Washington Treaty, any party could leave NATO once the Treaty had been in force for twenty years. At that time, some allies feared that the 20th anniversary of NATO could be marked by the departure of France from the Alliance, potentially setting up an unpredictable chain reaction that could lead to the end the NATO.

To the chagrin of legions of critics these and other disagreements in NATO’s early history did not lead to the collapse of the Alliance. In fact, the opposite happened. Time and time again, allies would rise to the occasion and through laborious consultations they would resolve disagreements and strengthen their bonds.

In 1956, NATO issued the so-called Three Wise Men report, which promoted non-military cooperation, supported the development of a mutually acceptable policy vis-à-vis the Soviets, and also sought to nurse the wounds of the Suez Crisis. Following Eisenhower’s introduction of his “New Look” policy, European NATO partners began to gradually increase defence spending, though the United States still carried the largest share of the financial burden. Furthermore, in response to the Cuban Missile Crisis backlash, in 1963 the US leadership promised to improve consultations with Europe and reassured allies that any future policy initiatives toward the Soviets would include “a NATO view.” Lastly, though France continued to operate outside NATO’s military command for the remainder of the Cold War, it remained an indispensable ally of Euro-Atlantic stability and security.

Regular debates in the 1950s and ’60s on the future policy course of the Alliance culminated to an extent in NATO’s release of the “Report of the Council on the Future Tasks of the Alliance,” more commonly known as the Harmel Report in 1967. At its core, the report advocated the adoption of a dual-track policy for NATO: deterrence and détente, i.e. maintaining adequate defence while promoting political détente with the Eastern bloc. The immediate impact of the Harmel Report was that its conclusions not only allowed NATO to institutionally adapt to a changing political environment, but that it also provided the green light for the Alliance to play a much more active role in East-West negotiations.

After a short period of relative calm, NATO’s capacity to react to a growing security threat and to respond in a decisive manner was once again put to the test following the Soviet deployment of SS-20 missiles within striking distance of Western Europe. In 1979, NATO’s leadership responded to this provocation by taking the bold decision to implement the “double-track” strategy, which sought to limit the Soviet military threat. According to this strategy, NATO would negotiate for the removal of the SS-20s, but should the Soviets refuse to withdraw them, allies would deploy equivalent missile systems.

And so it happened: the Soviets refused to back down and in 1983 NATO began deploying 572 new nuclear and cruise missiles, including the 108 Pershing II missiles that were housed in West Germany. Suffice to say that this decision stunned the Kremlin and forced it to engage in arms control talks. Much later the Soviet military leadership admitted that the decision to deploy new missile systems caught them off guard and that they did not expect such firm countermeasures from NATO.

NATO’s double-track strategy also directly led to the protracted, but ultimately successful negotiations between the United States and the Soviet Union, which in 1987 resulted in the signing of the Intermediate-Range Nuclear Forces (INF) Treaty. This treaty, whose origins can be traced all the way back to internal NATO consultations, not only eliminated an entire class of missiles that threatened Europe and decreased East-West tensions, but also hastened the end of the Cold War.

A central flaw shared by many of the observers who prophesized that the Alliance would not live through its 20th birthday was that they misjudged the nature of many of the disagreements. These NATO naysayers were ignorant to the fact that for countries with different political interests it is perfectly normal to have competing views on the future course of the Alliance. For example, contrary to popular belief, even at the nadir of the NATO-French relations, de Gaulle did not intend to break up NATO. Instead, as other allies wanted for NATO to have a broader political and military mandate, he simply argued for a more limited “Alliance of the classical type.”

In fact, as Michael Rühle, who heads the Energy Security Section of NATO’s Emerging Security Challenges Division, recently noted in the New Atlanticist, the NATO naysayers always got it wrong because they “misunderstood political debate as a sign of NATO fatigue, not realizing that tackling difficult policy issues and ironing out disagreements is one of the most basic functions of an alliance. They also mistook debate about the future course of the Alliance for disagreement over its fundamental value.”

While it is difficult to pinpoint why exactly NATO has been so durable and effective during the Cold War, as so many different factors had been at play, it could be argued that the Alliance’s recipe of success rests on two equally important pillars: security interests and values.

To the Europeans, NATO first and foremost provided hard security guarantees against a neighbouring Soviet threat. Without the involvement of both the United States and Canada, European powers would have not stood a fighting chance against the troops stationed on the other side of the Iron Curtain. To the North Americans, and particularly the United States, NATO acted not only as a force multiplier, which provided access to foreign bases, logistical hubs, and manpower, but also as a legitimizing framework for the collective use of military power.

Unlike most alliances in history, NATO is unique because it is not only a military alliance, but also an alliance of human and political values. It could even be argued that NATO might not have survived the trials and tribulations of the Cold War and ended up in the company of such relatively short-lived alliances as the Southeast Asia Treaty Organization (SEATO) and the Central Treaty Organization (CENTO), if not for the fact that its member states shared a set of values. The common belief in liberty, human rights, and democracy acted as a connective tissue that held countries together and helped to weather both geostrategic realignments and political storms coming from both sides of the Atlantic.

On top that, NATO has benefitted greatly from that fact that it is the physical embodiment of the transatlantic bond that unites the continents of North America and Europe. Two World Wars have taught the lessons that Europe and North America are stronger, safer, and more prosperous together. At a more practical level, NATO not only provided ironclad collective security guarantees to all of its members, but also established the only forum where North Americans and Europeans could discuss and consult on a whole range of security issues on a daily, permanent basis.

Throughout its seven-decade long history, NATO faced more challenges than one could possibly imagine, but arguably none were greater than those it faced during the Cold War. It had to deal with the very real threat of a nuclear-backed Soviet invasion against Western Europe, manage serious disagreements between allies and still possess the capacity to take resolute action whenever the changing security situation called for it. The fact that NATO successfully accomplished these towering tasks for so many years needs to be recognized and understood by today’s generation of leaders not only because of its historical value, but also because it presents an important source of guidance for the challenges that NATO faces today.

Lukas Trakimavičius works at the Economic Security Policy Division of the Lithuanian Ministry of Foreign Affairs. This article reflects the author’s personal views. Follow him on Twitter @LukasTraki.

Image: Leaders of NATO member states, including US President Donald J. Trump (front row, fourth from left), and NATO Secretary General Jens Stoltenberg (front row, third from left) prepared to pose for a family picture ahead of the opening ceremony of the NATO Summit in Brussels on July 11, 2018. (Ludovic Marin/Pool via Reuters)