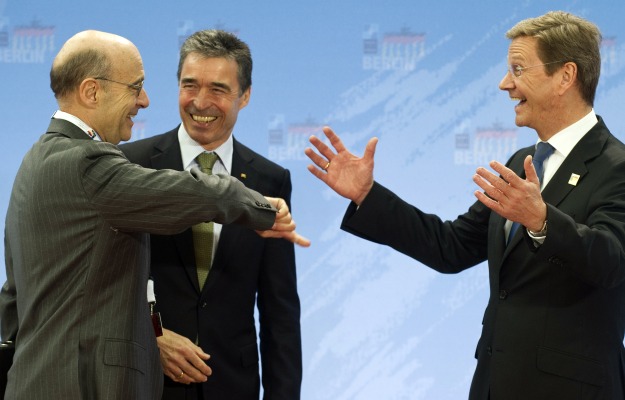 NATO’s operations in Libya got off to a rocky start. Although the venerable treaty organization’s member countries — principally Britain, France, and the United States — were dropping bombs on Muammar al-Qaddafi’s military as soon as the ink was dry on the March 17 U.N. Security Council resolution authorizing a no-fly zone over Libya, as of late March the allies still couldn’t agree on whether NATO itself should lead the mission. Turkey, opposed to intervention, insisted on the alliance acting unanimously, which was to say, not acting at all; hawkish France opposed NATO leadership, fearing less-enthusiastic countries would muck up the ad hoc coalition’s campaign. Weeks later, confusion still persists, with heads of member states issuing conflicting statements and military leaders contradicting their civilian bosses.

These hiccups have spawned the inevitable prophecies of doom for the alliance. "Will the Libya intervention bring the end of NATO?" asks the headline on a column by Anne Applebaum in theWashington Post this week. Other interested parties in the Libyan conflict, meanwhile, have engaged in no end of backseat driving over the alliance’s performance. The Arab League, whose call for action in Libya was a crucial catalyst for spurring intervention, denounced NATO for being too aggressive once the action began. The anti-Qaddafi rebels bitterly complained the alliance wasn’t doing enough.

These dire predictions are nothing new — they’ve greeted every NATO operation over the past several decades. NATO’s critics were wrong then, and they’re wrong now. Indeed, the case for the alliance is stronger than it has been since the collapse of the Soviet Union.

To take the current critiques of the alliance one at a time: Applebaumclaims that the NATO label is but a fig leaf for what is "an Anglo-French project and has been from the beginning," arguing that they insisted on intervening in Libya under the alliance banner because "neither Britain nor France wants responsibility for the operation — and neither feels comfortable relying on the other."

In truth, however, the political value in a NATO operation is that the alliance’s name is a stand-in for the developed world and operating under its name confers a legitimacy that national flags don’t. This is particularly the case for Britain and France, whose colonial histories bring enormous baggage in the Middle East and North Africa — not to mention the United States, with its own more recent complicated history in the region. With the notable exception of Russia, NATO does not have imperialistic connotations. In its 62 years of operation, the alliance has deployed its might sparingly: humanitarian protection missions in Bosnia, Kosovo, and now Libya; maritime missions against the Somali pirates; and fighting the Taliban in Afghanistan. While not all uncontroversial, these operations all had widespread international approval.

This is not insignificant. Domestically, the NATO aegis provides assurances to publics — particularly in Europe — that are weary and skeptical of war. Internationally, it takes much of the edge off the use of hard power, making it clear that humanitarian interest, not a thirst for foreign oil, is the motivation for action. It’s true that, in the case of Libya, the call for action by the Arab League and the imprimatur of the U.N. Security Council provided substantial cover, too. But, as the comedian Dave Chappelle memorably pointed out, the United Nations doesn’t have an army. NATO does — or at least its member states do.

This fact does raise the question, however, of whether the existence of an official NATO alliance adds anything to a collective action by countries such as Britain, France, and the United States — which are, after all, allies anyway and supply NATO’s soldiers and military hardware. As the Iraq war demonstrated, the United States and its allies can fight just fine apart from NATO as a coalition of the willing.

But this sort of ad hoc alliance comes with lower legitimacy — as the Iraq war also demonstrated — and without an institutional framework that has benefited from six decades of development. Though NATO’s bureaucracy is a favorite butt of jokes by even the alliance’s staunchest supporters, its existence provides a massive head start. As a standing alliance, NATO has been the main venue for making sure that different countries’ command structures and systems can work together, creating standard operating procedures, and ensuring a degree of uniformity in weapons and equipment. The commencement of a war is a really awful time to work these issues out, as we saw in the first Gulf War and its numerous friendly-fire incidents.

The most militarily significant members of NATO have been working together now for generations. Alliance members constantly train together and, over the last two decades, fight together. While an American has always been supreme allied commander for Europe, major operations have been commanded by generals and admirals from almost all major NATO partners. There is no hesitation for British troops to take orders from French generals or vice-versa.

NATO’s engagement in Libya has also given lie to the argument that the alliance has no place in the strategic realities of the post-Cold War world — a criticism that has grown in strength since the war in Afghanistan began to turn sour. In 1993, U.S. Sen. Richard Lugar famously declared that NATO must go "out of area or out of business": that the alliance had to prove its value beyond Western Europe in a world without the Soviet threat that had justified its creation. Otherwise, there was little incentive for the United States to invest in an alliance that would not be able to fight in actual wars.

NATO avoided having to answer this existential question in the 1990s thanks to several in-area operations in the Balkans. In those wars as in Libya today, a reluctant United States was shamed into action by insistent European allies. And then as now, after an initial lead role during intense air operations, the United States handed over the long-term responsibility to the Europeans. It was the post-9/11 mission in Afghanistan, rather, that proved NATO’s relevance beyond Europe. For the first time ever, NATO invoked Article 5, the linchpin of the alliance, which insisted that an armed attack on one member be treated as an attack on all. The Europeans stepped up to the plate, even after offers of help were initially brushed off by George W. Bush’s administration.

The glow faded in Afghanistan, however, as the mission of retaliating against those who had attacked a member state morphed into one of nation-building — establishing democracy and stability in a country that has little progress to show for years of fighting and massive amounts of blood and treasure spent. Enthusiasm waned. Many allies have pulled their forces out entirely. Despite acommitment by NATO’s member states at November’s Lisbon summit to stay in Afghanistan through at least the end of 2014 and to address threats wherever in the world they might arise, most observers were deeply skeptical that NATO would ever again be able to operate outside Europe’s borders absent a direct threat.

And yet, only months later, here we are.

To be sure, this is not an unalloyed good. Many — myself included — were and are highly dubious of intervention in Libya’s civil war. But it’s clear that the United States, Britain, and France were all inclined to intervene regardless. And once that decision was taken, using NATO as the platform was a no-brainer.

It’s true that anti-Qaddafi forces have been mistakenly killed by NATO forces. But that’s a function of both the amateurism of the Libyan rebels and the constraints under which NATO must operate. As NATO Secretary-General Anders Fogh Rasmussen told Spiegel, Qaddafi "has changed his tactics. But that also points to our successes. Now that he has to hide his tanks and other heavy weapons, he can no longer use them as easily against civilians."

The chief issue underlying most of NATO’s problems in Libya is lack of consensus on the desired end state. Rasmussen insists that the fate of Qaddafi and what manner of government the country might have in the future are matters for Libyans to decide. But Qaddafi will survive unless NATO forces him out — the ragtag rebels simply don’t have the ability to do it, even with someone else knocking out the dictator’s airplanes and tanks. Having entered the fight in Libya, NATO is under serious pressure to end it with Qaddafi out of power and a stable, democratic government in his place. But the most powerful member, the United States, has receded into a supporting role and insists that it will put no boots on the ground. If the intervention goes badly, the blame will (rightly) go to national political leaders — particularly Barack Obama and Nicolas Sarkozy — for committing to a war without the willingness to see the job through to its logical conclusion.

The fact of the matter is that the Libya operation is, like any multilateral effort, subject to the constraints of the least enthusiastic member. By insisting on a U.N. Security Council resolution, the coalition members accepted a very narrow mandate in order to secure abstentions from Russia and China, council members that would have vetoed anything more robust than a civilian protection mandate. In short, the mission’s most serious limitations are not the fault of NATO but rather of the United Nations. The same problems would exist, and might well be worse, if the players had carried out Resolution 1973 without the alliance.

NATO does, however, face one looming problem, one that long predates the Libya intervention but is bound to complicate it: the unwillingness of Europeans to adequately fund their own militaries, instead allowing the Americans shoulder the burden. As the Center for a New American Security’s Andrew Exum points out, "The problem with being a free rider is that if you ever decide … you need to drive someplace yourself, you realize quickly that you no longer have the means to do so."

This criticism isn’t new, of course. Americans have been bemoaning Europeans’ lack of defense spending since at least the 1970s. But it has gotten worse in recent years and come to a head in the current regime of austerity that has followed the global financial crisis. Even France and Britain, easily the two most robust military powers in Western Europe, have slashed their budgets in this environment, so much so that they now have but a single aircraft carrier between them.

That the second- and third-biggest powers in the world’s most powerful military alliance need U.S. help to take on Qaddafi’s pitiful forces should be a wake-up call. As Exum puts it, "Hopefully this intervention in Libya will convince European leaders to either stop talking so tough regarding military interventions or to re-invest in truly independent military capabilities."

That’s unlikely in the near term; the combination of political culture and economic pressure make it all but untenable. But there’s good reason for hope in the longer run. The British and French, in particular, covet their national sovereignty and still rightly see themselves as world powers. Without providing for more robust forces on their own, as the Libya operation is demonstrating, even such mundane things as 1970s-era close air support jets are "unique military capabilities" for which they must lean on America.

As strong and valuable an institution as NATO is, it will not reach its full potential so long as it remains utterly dependent on the United States to do the heavy lifting. Maybe Libya will be the wake-up call for Europeans who have until now not seen much value in investing in their own defense.

James Joyner is managing editor of the Atlantic Council. This piece was originally published in Foreign Policy.