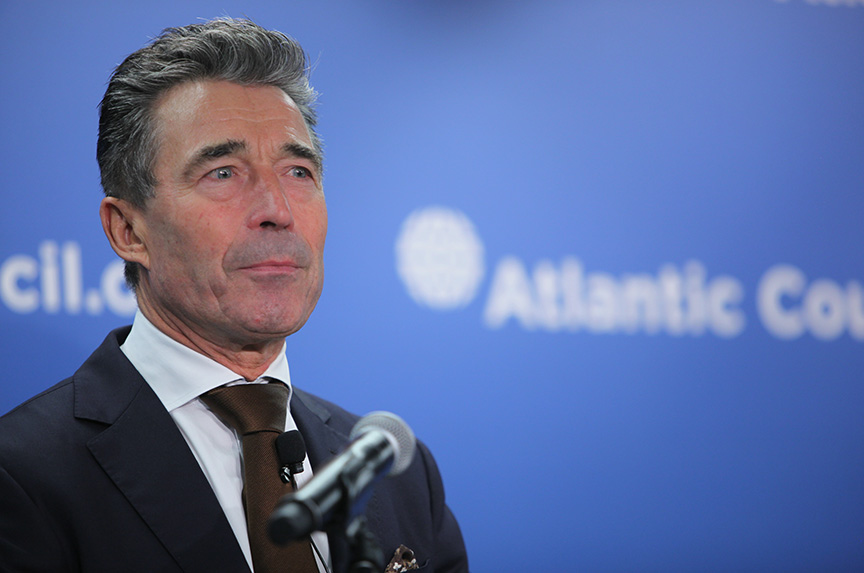 In a thinly veiled swipe at Republican presidential nominee Donald Trump, Anders Fogh Rasmussen, a former secretary general of NATO, said on September 29 that it is in the United States’ best interests to be the world’s “policeman,” and it would be dangerous to condition the defense of allies on their financial contributions toward security.

In a debate with his Democratic opponent, Hillary Clinton, in New York on September 26, Trump said the United States “cannot be the policeman of the world, we cannot protect countries all over the world, where they’re not paying us what we need.”

Trump supporter and former speaker of the House of Representatives, Newt Gingrich, has also expressed doubt about whether a Trump administration would risk nuclear war with Russia by coming to the defense of Estonia in the event of a Russian attack.

Such comments raise doubts about NATO’s resolve to maintain collective defense, said Rasmussen, noting that Estonia is one of five countries in the twenty-eight-member Alliance that actually spends the required two percent of its GDP on defense.

“There has been one thing carved out in stone and that is Article 5,” said Rasmussen, referring to the article of NATO’s founding treaty that lays out the principle of collective defense.

“Making it a precondition that all countries pay their fair share of collective defense, I am concerned it will tempt Mr. Putin to test the resolve of our Alliance,” he added.

Trump’s position on NATO has evolved from questioning the US role in the Alliance to support for it.

Rasmussen contended that the United States benefits from its participation in NATO.

“In general, NATO is the best deal the US has ever made,” he said. “Thanks to allies, you get security much cheaper than otherwise.” For example, 40,000 European troops were part of the 130,000-strong coalition force that deployed to Afghanistan following the terrorist attacks on the United States on September 11, 2001.

Addressing concerns about anemic European defense spending, the former NATO secretary general said Europeans have come to realize the importance of security following Russia’s annexation of Crimea in March of 2014. “We will have to invest more [in security], and Europeans will invest more, but you cannot make defense of an ally dependent on economics,” he added.

Following his remarks, Rasmussen participated in a conversation moderated by Julia Ioffe, a contributing writer with Politico Magazine.

The world needs a policeman

Rasmussen, a former prime minister of Denmark, painted a grim picture of a world in crisis, claiming, “wherever you look, the world is on fire.” For example, Libya is a failed state, a revanchist Russia is intimidating Eastern Europe, China is flexing its muscles in its neighborhood, and North Korea is threatening a nuclear attack.

“We need a world policeman to restore law and order,” said Rasmussen.

He ruled out the United Nations, Russia, China, or Europe as fit contenders for this role. “The US is the only capable, desirable, and reliable candidate to that post,” Rasmussen said. “The fact is that when the US retreats, or even is perceived to retreat, the US will leave behind a security vacuum that will be filled by the bad guys.”

“If there is doubt about the American leadership, the result will be stronger foes, weaker friends, and a more insecure world,” he added.

Rasmussen said the fact that the United States is “surrounded by peaceful neighbors and fish” allows it to concentrate on the task of leading the world. The United States, he said, is an “exceptional nation, but with that exceptionalism also comes exceptional responsibilities and obligations.”

“The US is destined to lead, whether you like it or not,” he added. “This is not a question of a Republican or a Democrat in the White House. For me, this is primarily a question about the will to lead.”

Assuming the mantle of the world’s policeman is easier said than done at a time when isolationism is on the rise—evidenced by developments across Europe and in the US election rhetoric.

“If you don’t strike enemies on their soil they will go to America and hit you on your soil,” he said, warning of a repeat of 9/11 if security challenges are not addressed at their root. “Prevention is less expensive than cure also when it comes to security policy.”

Without security, trade patterns would change and the risk of a Europe dominated by Russian thinking on the United States’ doorstep could materialize, said Rasmussen.

Europe today faces multiple challenges. The winds of isolationism have buoyed far-right political ideologies; an unprecedented number of migrants fleeing war zones in the Middle East and Africa test the goodwill of European governments and publics; and the economic crisis is far from over. “All these things together risk unravelling the European integration project,” said Rasmussen. Strong US leadership is key to saving the European project, he added.

Early in the Obama administration, Clinton, then Secretary of State, attempted to reset the United States’ relationship with Russia. The reset was officially deemed a failure when Russia annexed Crimea from Ukraine on March 18, 2014.

Is it time for another reset?

The onus is on Russia to mend its ways, said Rasmussen. “We have done what we can and if Russia is threatened, it is definitely not from the West,” he said. If Russia faces a threat, according to Rasmussen, it is from Islamic terrorists in the Caucuses.

NATO’s open-door policy has also strained its ties with Russia. Moscow is particularly concerned about the number of former Communist states that are lining up to join the Alliance.

Rasmussen said NATO should remain committed to its open-door policy for as long as nations want to join and that the integration process will not be complete until all Balkan countries have become members of NATO and the European Union. “The Russians, instead of complaining, should think about why their neighbors are so eager to join our organization,” he said. And when it comes to Ukraine, he added, “the West has a moral obligation to make the Ukrainians better able to defend their own country.”

On September 28, international prosecutors revealed that Malaysia Airlines Flight MH17 was shot down by a missile from a launcher brought into Ukraine from Russia. Rasmussen said these findings could convince European governments of the need to prolong sanctions on Russia. The European Union and the United States imposed these sanctions in response to the annexation of Crimea.

Lessons in Syria and Libya

In Syria, where a war has raged since 2011, Rasmussen ventured that the situation would be far better had the United States and NATO intervened early in the crisis. He said Russia’s “reckless” military intervention on the side of Syrian President Bashar al-Assad’s regime last year had prolonged and worsened the conflict.

On Rasmussen’s watch and following a UN Security Council resolution, NATO launched a successful air campaign to defend civilians in Libya in 2011. Backed by NATO jets, rebels toppled the regime of Moammar Gadhafi, who was later killed in rebel custody.

NATO’s mission in Libya ended on October 31, 2011. Libya quickly descended into a chaos from which it has yet to extricate itself. Rasmussen had expected the international community—particularly the United Nations—to step up and help Libyans build neglected and devastated state institutions. “No one was there,” he said, referring to the absence of political follow up.

“The lesson learned from the Libya operation is that even the most successful military operation may end in failure if it is unaccompanied by a well thought through political strategy for how to follow up in a post-conflict situation,” he added.

Image: “If there is doubt about the American leadership, the result will be stronger foes, weaker friends, and a more insecure world,” Anders Fogh Rasmussen, a former secretary general of NATO, said at the Atlantic Council on September 29. (Atlantic Council/Victoria Langton)