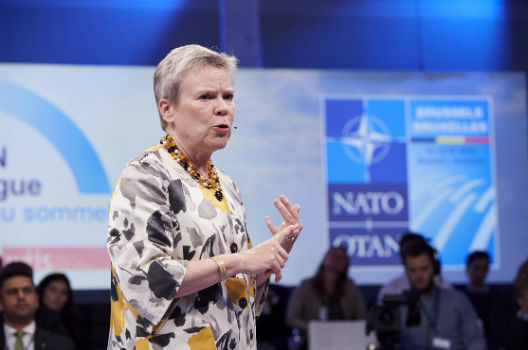 After a NATO summit marked by harsh criticism from Donald J. Trump of allies over defense spending, NATO Deputy Secretary General Rose Gottemoeller congratulated the US president for his leadership, which she said “has already shown results.”

Gottemoeller, speaking at the final session of the NATO Engages event in Brussels co-hosted by the Atlantic Council, said that Trump’s sharp attacks led to “a very deep and intense discussion around the table about how the Alliance needs to intensify its efforts to fulfill its commitment to defense spending.”

Gottemoeller, who previous to her role at NATO was the US under secretary of state for arms control and international security affairs and a lead negotiator for the New Strategic Arms Reduction Treaty in 2009-2010, provided a different picture of the summit’s discussions than portrayed in many media reports.

She assured the audience that NATO leaders “are people who know how to talk to each other. They talk very directly. People threw away their talking points—which was good, it was the right thing to do. They needed to talk to each other about… intensifying the commitment to achieve what has been promised.”

She acknowledged that there was certainly “a butting of heads,” but argued “that is what good leaders do. They don’t mince words with each other when they need to come to an agreement.” Although conversations were tense at times, she said that the result of the meeting was “a very clear view that allies are together in redoubling their commitments, in moving forward.”

Echoing the words of NATO Secretary General Jens Stoltenberg on July 11, she credited the US president with providing the needed emphasis to steer the allies back to their 2 percent of GDP defense spending commitments. “President Trump has really pushed people hard to intensify their efforts,” she said. Sensing that many Europeans felt offended by Trump’s tactics, she added, “what is wrong with a good debate?”

In addition to her comments on the defense spending issue, Gottemoeller highlighted many of the summit’s tangible successes during the session, which was moderated by Karlijn Jans from the Hague Center for Strategic Studies.

Gottemoeller described an “arc of effectiveness” extending back to the 2014 Wales Summit and 2016 Warsaw Summit, during which time the Alliance strengthened its fighting capabilities, forward projection in the eastern flank, and developed its ability to reinforce potential conflict zones quickly.

This last point was the focus of this summit, Gottemoeller said, and resulted in the adoption of the Readiness Initiative, which promises to develop the capability to have thirty armed battalions, thirty naval vessels, and thirty aircraft squadrons ready to be used in combat zones within thirty days notice. The success of these initiatives shows “that NATO delivers in terms of military effectiveness,” according to Gottemoeller.

She also celebrated the membership invitation for the Former Yugoslav Republic of Macedonia (FYROM), the decision to extend Operation Resolute Support in Afghanistan and establish a new training and capacity building mission in Iraq, and the increased visibility of NATO’s Women, Peace, and Security initiative.

As the summit ends, Gottemoeller outlined the work that still needs to be done. Although hybrid threats and cybersecurity figured prominently in NATO discussions, she highlighted that the allies must still come up with an effective deterrence method to prevent attacks and the continued need to build resiliency within members’ societies. She also emphasized the need for NATO leaders to follow through on the commitments made during the summit, especially on the contentious defense spending issue.