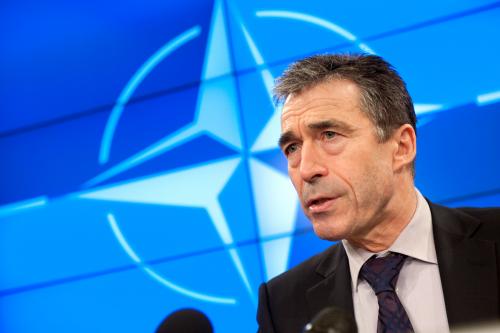 NATO member states have struggled for days to resolve the debate within the Alliance about the proper role for NATO in the coalition intervention in Libya. Opposition to a formal NATO command of operations focused on the image of the Alliance leading the military operation and concerns that a NATO operation would limit the operational flexibility of commanders to execute the mission. This opposition poses questions about the role and relevance of NATO and the North Atlantic Council in commanding out-of-area operations among transatlantic allies that incorporate partners. What are the implications for NATO and the NAC for how this mission will be structured and commanded? What are the arguments for or against NATO command of the full Libya operation, including the civilian protection mission? How should the NAC relate to a broader contact group on Libya in terms of strategic and political guidance for the international campaign?

Jean Paul Perruche:  NATO is an intergovernmental organization and requires common analysis, shared objectives, and agreement of its 28 members on the courses of action and timescale of an operation. This has obviously not been the situation in the early going in Libya.

If we had waited until we achieved full agreement in NATO to act, Gaddafi would have re-established his bloody power on the whole territory. In this situation, then, there was a contradiction between NATO’s formal requirements for unanimity and the urgency of the required action to be undertaken. This should lead to reflection within the Alliance. We must examine the possibility of launching operations under the NATO label with only a part of members engaging and others opting out.

Ioan Mircea Pascu: The truth is that, for a variety of reasons, some coalition members were more interested than the others to see the military operation started.

NATO, whose internal difficulties in achieving consensus have been exposed, managed in the end to get an agreement and thus achieve the minimum degree of unity to permit the execution of its command role. However, that might prove a more difficult and delicate task than in other cases, given the variety of interests on which the current Libyan operation is based. The need for political harmonization will, therefore, be paramount in achieving the necessary agreement for commanding it.

Michael Durkee: NATO has demonstrated in the Balkans and elsewhere that it can conduct effective multinational operations incorporating Arab and other non-NATO forces. Among the individual coalition nations, only the US has the military capabilities, structures, assets and experience to plan and coordinate complex air operations of the kind being conducted over Libya.

The fact that NATO will carry out the military command role does not mean that the NAC will be the exclusive political decision-making body. Again, there is history to consider, as in Bosnia, where the Contact Group and the Peace Implementation Council were important bodies for consultation and decsion-making about the overall purposes of the international efforts to implement the Dayton Peace Accords that ended the fighting. Neither body pretended to give direction to the military forces in the field. Within NATO, there are expanded bodies which bring together all the contributors to NATO-led operations, as in Afghanistan, to be briefed and to discuss the conduct of the operations. Once a political consensus emerges, the NAC can incorporate it into political guidance to SACEUR, who then translates it into military instructions to the chain of command.

Given this experience, there is no reason for despair about the evident differences among coalition members about the strategic objectives or the conduct of the day-to-day operations–the political process follows a different timeline, and getting to a solid consensus on such matters is not quick or easy. An inclusive political body, bringing all the interested parties and contributors, can usefully complement the NAC and facilitate agreement on the broader purposes of the international intervention. Once such decisions are reached, the military process will adjust and carry on. Beyond the mechanics, what matters most is keeping the coalition united."

Jean Paul Perruche is Research Director of IRSEM-Paris and former Director-General of the EU Military Staff. Ioan Mircea Pascu is a Member of the European Parliament and former Romanian defense minister. Michael Durkee is a retired Senior Foreign Service officer who served as political advisor to four SACEURs.