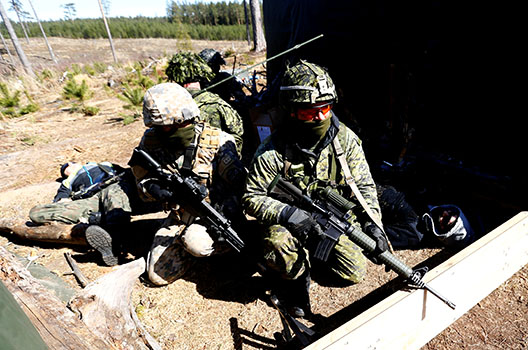 NATO defense ministers agreed on June 7 to support a new “Four Thirties” military readiness plan designed to enhance deterrence by creating a new “culture of readiness” in the Alliance. It is one of four related initiatives suggested by the United States to ensure that Moscow does not believe it can exploit the Alliance’s slow deployment and political divisions in the opening stages of a conflict. Elements of the four initiatives should be adopted at the Alliance’s summit in Brussels on July 11-12 to prevent this scenario and help address NATO’s burden-sharing problems.

Currently, NATO forces are plentiful but cannot mobilize quickly enough to reinforce the four NATO battle groups forward deployed in the Baltic States and Poland should they be attacked. This weakness might cause Moscow to attempt to attack these forward troops in the hope that NATO would fear escalation and fail to respond. In addition, unpredictable security challenges coming from the south could also require more rapid reinforcement than NATO can currently pull off.

The other three elements of the US administration’s package of initiatives include rapid political decision making, command structure reform, and removal of physical and legal impediments to military movement across the European continent.

The Four Thirties Readiness Plan would ensure that by 2020, NATO could employ thirty mechanized battalions, thirty squadrons of fighter aircraft, and thirty major naval combatants in thirty days or less. This is a distant echo of the Cold War American plan to reinforce Europe with ten divisions in ten days.

This Readiness Plan is critical to the overall package. If forces are not ready to be used quickly, the other factors do not matter. Recent NATO missions have focused on stability and counterinsurgency operations outside of Europe, with planning cycles lasting half a year or longer. As a result, even the United States’ most capable allies would have a hard time deploying a single brigade in a month. The Very High Readiness Joint Task Force (VJTF), created at the 2014 Warsaw Summit, is unlikely to live up to its name.

The United States had hoped for an even shorter readiness period, but feasibility rules. Yet the plan has three positive elements. First, thirty days is a maximum readiness period for the designated forces. Shorter periods should be encouraged, especially for air forces. Second, the thirty days is the employment, not deployment period, which implies that the forces would be on the line ready to fight by that deadline. And third, the committed forces would be above the already agreed levels of ready forces. The VJTF, the NATO Response Force, and NATO Enhanced Forward Presence forces would, therefore, not be counted, making the total number of ready forces larger than “three thirties.” This will not be business as usual, but a significant improvement in NATO’s immediate capability.

The next step, after the summit adopts this plan, will be to designate which forces would meet the new standards and to create reporting and certification requirements to implement the plan. The plan would also eventually need to be exercised.

Readying ground forces should not cause a serious strain, although it could require three battalions in different phases of readiness to always have one of them at the highest level of readiness. If the United States counts its three brigades already deployed in Europe, and the United Kingdom, France, Germany, Italy, and Poland each contribute one brigade, this part of the plan should be close to complete. Additional battalions might be contributed by smaller allies.

While naval forces are inherently more mobile than ground forces, they too have concentrated on less stressful missions like counter-piracy, counterterrorism, and immigrant rescue operations. The thirty major combatant ships would need to adjust their missions to more intense warfare to meet the readiness test. Given that many have long-range missiles aboard, they would not need to be employed directly in the immediate combat zone. Overall the allies have numerically more naval combatants than the United States, so meeting this part of the readiness goals should not be too difficult for the allies.

Air forces will need to concentrate on crews, airfields, munitions, and refueling to meet this goal. NATO has plenty of capable fighter aircraft and will be buying more F-35s, but getting those aircraft armed, quickly in the air, and over targets in adequate numbers and on a sustained basis will require work.

The United States is already taking steps under its European Deterrence Initiative (EDI) to meet its readiness contribution. EDI spending should grow to $6.5 billion in 2019, a massive increase over just a few years ago. Those funds will be spent not only on US operations in Europe, but also on readiness items like airbase construction and prepositioning of ground force equipment.

Some critics have expressed concern that a Brussels Readiness Plan might spook the Russians into a new military spending spree. This plan, however, does not propose to add to the NATO force structure. It would just make part of what NATO already has available more ready. Additionally, no new major US forward bases are being contemplated for now, only infrastructure improvements at existing facilities. Russia should not consider this an offensive threat, just a clear message that NATO can and will defend its territory. If Russia changes its behavior, these measures might not be as necessary.

The NATO Readiness Plan is in good shape. The other three related initiatives are in different stages of completion. Command structure reform has also progressed well, as two new commands will be created to forward deploy these ready forces. An Atlantic Command based in Norfolk will support the recreated US Second Fleet and protect transatlantic supply lines, while a new Support Command based in Ulm, Germany, will coordinate forward deployment of forces inside Europe. About 1200 new staff will be added to NATO’s command structure to implement these two new commands.

NATO and the European Union are working together under Dutch guidance to begin dealing with mobility problems that could create bureaucratic traffic jams, collapse weak bridges, and overwhelm rail lines. Both the NATO summit and upcoming EU meetings are on track to address these issues, but some resistance to change remains.

Perhaps the most politically sensitive problem related to the overall readiness cluster is decision making. Even if forces are ready, mobility problems are smoothed over, and troops are properly commanded, not much can happen if political decision makers freeze in a crisis. Thus far US initiatives to create decision-making deadlines and to give greater authority to SACEUR (the Supreme Allied Commander Europe) have not been successful. More will need to be accomplished in this area before the July summit.

Taken together, the Brussels Readiness Plan and related initiatives will build on the successes of the 2014 Wales Summit and the 2016 Warsaw Summit and further strengthen NATO’s deterrent posture.

Hans Binnendijk is a Senior Fellow at the Center for Transatlantic Relations. He formerly served twice at the National Security Council and as Director of the Institute for National Strategic Studies.