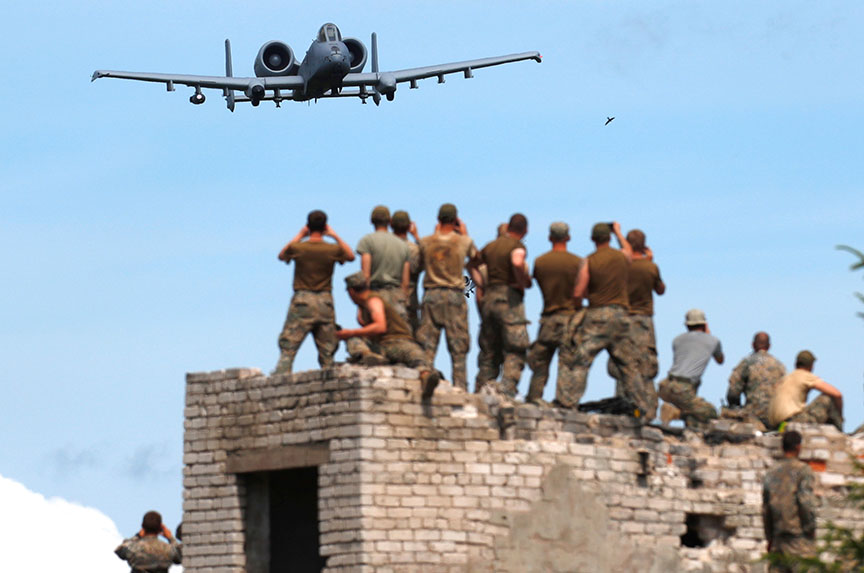 At the NATO summit four years ago, the allies declared their commitment to “reverse the trend of declining defense budgets, to make the most effective use of our funds and to further a more balanced sharing of costs and responsibilities.” To that end, the heads of state and government gathered in Wales that summer recommitted themselves to increasing defense spending in real terms and achieving the NATO guideline to spend a minimum of 2 percent of each member’s Gross Domestic Product (GDP) on defense by 2024. In the buildup to this July’s NATO summit in Brussels, US President Donald J. Trump is both publicly and privately pushing the allies to live up to this commitment, which fewer than half NATO’s twenty-nine members have plans to achieve.

Although I acknowledge that’s a different question than the one suggested by the NATO guideline—which focuses on aggregate defense spending, not just spending on the defense of Europe—the answer to it is nonetheless instructive. It may help to put into a proper perspective the unfortunate acrimony over this particular metric, giving pause to American chest-beating over the burden-sharing question at the Brussels summit.

Let’s do the math. According to the Department of Defense (DoD) Comptroller’s National Defense Budget Estimates for 2019, the DoD is projected to spend 3.1 percent of GDP in the fiscal year ending September 30 (see Table 7-7 in the National Defense Budget Estimates for 2019). That’s the ratio of the comptroller’s roughly $620 billion estimate of DoD outlays in 2018 compared to an estimate for GDP of a little over $20 trillion. So, by the strict measure of the Wales commitment, the United States is a model ally, exceeding the 2 percent guideline by more than $200 billion, and well ahead of the 2024 deadline.

However, before straining too hard to pat ourselves on the back, let’s recall that the United States spends such a large proportion of its national income on defense in no small part because of its geographic disposition on two great oceans and a national security strategy expressing expansive global interests and deep international engagement. No European nation holds anything approximating our geographic exposure and global ambitions, so we should hardly be surprised to learn that these countries generally dedicate a comparatively smaller portion of their national income to defense.

Still, it begs the question: How much of the United States’ $620 billion defense budget is committed to the defense of Europe? The answer to that question is less amenable to calculation than it is to critical thinking. Except in respect to wartime deployments, the forces and resources of the US military are neither organized nor budgeted into geographic regions. Consequently, parsing the DoD’s $620 billion into pieces like “Europe,” the “North Atlantic,” or any other region of the United States’ global interests is methodologically fraught and hugely contentious.

Once you set off down the rabbit hole of apportioning to regions the operating and investment costs of, say, an Army brigade combat team stationed at Fort Hood, Texas, you’ll begin to appreciate the difficulty. Rest assured, it’s been tried, but for our immediate purposes, it’s also not necessary. Instead, let’s just think critically about the threshold of aggregate defense spending represented by the NATO guideline and whether it is reasonable to associate that proportion or dollar amount of US defense with our commitment to NATO.

To set that threshold, let’s do more simple math: Two percent of $20 trillion is $400 billion. Given the range and scope of US national security interests across the globe, is it reasonable to think that such a preponderance—two-thirds—of aggregate US defense spending is committed to the defense of Europe (or would be unnecessary but for our interests and obligations to NATO)? Hardly. Conversely, would it be reasonable to think that the US military’s posture toward all the remaining interests of our nation—from the Korean Peninsula through South Asia and the Middle East and across the entire southern hemisphere—are financed by only one-third of the defense budget, or $200 million? Again, that could hardly be true.

So, while I’m not writing to tell you the exact proportion of the US GDP we are spending on defending Europe and fulfilling our obligations to NATO, it’s not 2 percent of our national income. Indeed, by the measure of how much NATO member states are spending on the defense of Europe, the United States most probably ranks in the middle of the pack, with somewhere between one percent and one-and-a-half percent of its GDP (or $200 billion to $300 billion) attributable to the interests in Europe of which our national security strategy compels a defense.

Scaled to the scope of their interests and grand strategies, our NATO allies are generally committing about the same proportion of GDP to the defense of Europe as the United States.

Steven Grundman is a senior fellow at the Atlantic Council’s Scowcroft Center for Strategy and Security. Follow him on Twitter @stevegrundman.

Image: US Air Force A-10 aircraft takes part in the urban fighting drill during the NATO Saber Strike exercise in the Soviet-time former military town near Skrunda, Latvia, on June 13. (Reuters/Ints Kalnins)