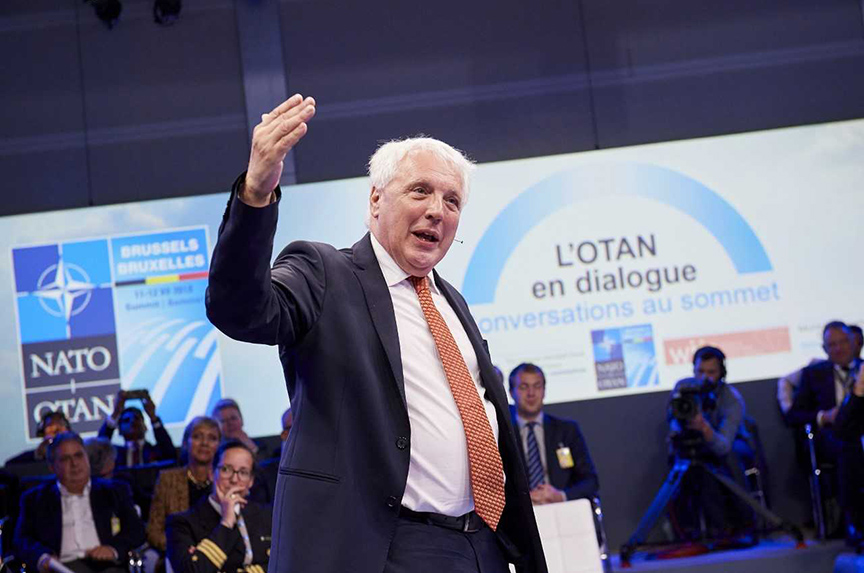 At a time where there are so many doubts about NATO at the political level, the paradox is that the Alliance on July 11 came out with a communique—agreed to by all member states—that is “the most substantive… the most complete, the most consensual,” notes Jamie Shea, NATO’s outgoing deputy assistant secretary general for emerging security challenges.

Many of those doubts about the Alliance have been raised by US President Donald J. Trump, who has expressed displeasure with allies whom he believes are not pulling their weight.

Shea has some advice for Trump: he should read the Alliance’s communique. “If I am President Trump I would think, ‘My God! This is music to my ears. It really does push the Alliance in a direction of being useful to me on all of my foreign policy initiatives,’” he said.

The communique, among other things, expresses the Alliance’s “unwavering commitment” to see member states dedicate 2 percent of their GDP to defense spending by 2024—a topic over which Trump has excoriated longstanding US allies.

With all the negative headlines that have swirled in the months and weeks leading up to NATO’s summit in Brussels this week, Shea said: “The conclusion is: we have got to tell this story better in the United States and we have got to show that NATO is much more [than] about burden sharing and that ultimately even those people who pay more than others in NATO still benefit massively more, in terms of security, than they would in a different world where they have to go it alone.”

The inimitable Shea spoke at the concluding public session of NATO Engages, a two-day summit jointly hosted by the Atlantic Council, the German Marshall Fund of the United States, the Munich Security Conference, and Women in International Security in Brussels on the sidelines of the NATO Summit.

Shea has for years served in multiple communications roles, including speechwriter to the secretary general and NATO spokesman. As he prepares to bring the curtain down on his NATO career, he did what he does best: promote the Alliance.

“NATO is both strong and fragile,” said Shea. But, he added, every generation has to rebuild and re-forge the Alliance. “That is a lesson for the present as well: NATO does not function on automatic pilot.”

While admitting that the media will dwell on the negative political rhetoric around NATO, Shea said: “Someone once said about [German composer] Wagner’s music: it is better than it sounds. And to some degree, that is a symbol of NATO today.”

Shea participated in a conversation with Cristina Gallach, the high commissioner for the Agenda 2030 for Spain, after the screening of a touching retrospective of his NATO career.

Gallach asked Shea whether there was a connection between spin—often employed by official spokespersons—and fake news.

“The problem we have today is our political leaders have to set the first standard by themselves—not indulging in any fake news,” Shea replied. “If we have political leaders who excoriate the press or the profession of journalism or talk about the ‘fake news media’ simply because that media sort of disagrees with their political opinion… if we ourselves start conveying the impression that truth is relative… then we are creating an environment where our adversaries will be able to play on this much more,” he cautioned.

Reflecting on his illustrious career, Shea noted with characteristic modesty: “I have been a foot soldier at NATO.”