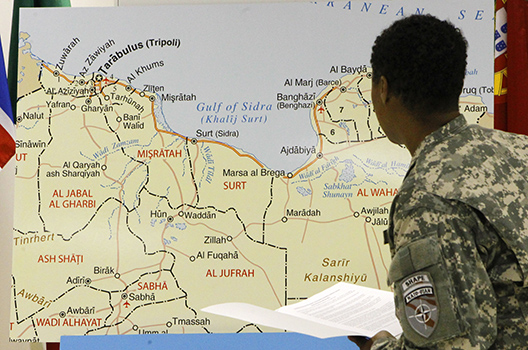 A soldier looks at a map representing the Libya's war theatre during a media briefing at the NATO's Southern Europe headquarters in Naples April 26, 2011 (REUTERS/CiroDe Luca)

Despite the high-profile acrimony over defense spending and worries about the United States’ commitment to NATO, the July summit in Brussels showed that the Alliance can still project strength on its eastern flank. The summit declaration included numerous programs, initiatives, and projects to strengthen the Alliance against Russian aggression. When it comes to addressing challenges in NATO’s south, such as destabilizing migration flows, terrorism, and general instability in the region, however, the Alliance has often struggled to demonstrate the same sense of strategic focus.

And yet, this year in Brussels, NATO planners took several steps towards strengthening the Alliance’s southern strategy. The extension of the commitment in Afghanistan and launch of the training mission in Iraq grabbed headlines, but another southern initiative was one of the quiet successes of the summit.

NATO leaders announced full operational capability for the NATO Strategic Direction South Hub, a self-styled “information sharing organization” housed at the Allied Joint Force Command in Naples, Italy. Amongst other responsibilities, such as public diplomacy and “horizon-scanning” (efforts to monitor NATO’s southern neighborhood and identify emerging challenges) the Hub will act as a single, centralized forum for NATO to engage with its southern partners.

This new Hub is a significant step for the Alliance in the south. In the past, major NATO documents such as the 2010 Strategic Concept and previous summit communiqués have been short on explicit policy measures for dealing with the south as a holistic strategic environment. The Hub not only represents a practical step in an institutional sense, but also provides NATO a venue to develop and utilize one of its most important tools in the region: partnerships.

The challenges in NATO’s south, from enormous migration flows to terrorism and piracy, are fundamentally transnational and require international cooperation and partnerships to address. NATO cannot hope to manage risks stemming from outside its territory without engaging with the countries where those risks originate.

Engagement and coordinated activity, however, require trust. Partners must be aware of each other’s priorities and confident in each other’s commitment. In the past, hindered by internal political debates, NATO has fallen short of providing the necessary clarity in this regard, especially in its key strategic documents.

Divergences within the Alliance over where NATO ought to direct the bulk of its strategic focus have impeded its ability to develop a coherent southern strategy in the past. Many of NATO’s eastern European members reasonably prefer to direct attention and resources towards the Russian threat. Even some NATO members who are relatively more concerned with the south, such as France and Italy, have preferred national-level responses and resisted an increased role for NATO.

As a consequence, according to a recent German Marshall Fund report, NATO’s southern partners have often been left guessing what the Alliance’s objectives are, leading to fears that NATO would, “either fail to engage adequately with security challenges in the region, or that NATO has something in mind, but has not shared it with partners.” In either case, the result diminishes trust between NATO and its regional partners. Without trust, smooth and reliable coordination on shared security challenges is likely to remain elusive, weakening NATO’s ability to effectively guard against southern threats.

Communicating Alliance objectives and enhancing trust with partners will therefore be vital for NATO, and the Brussels summit declaration represents significant progress in this respect. It explicitly outlines NATO’s three “main objectives” in the south: strengthening deterrence and defense, international crisis management, and helping regional partners to build resilience against security threats.

While NATO has operated in the south many times, previous summit communiqués have merely acknowledged the scope and importance of the challenges in the region and made vague promises to implement a framework for “adaptation,” but have not gone much further in terms of expressing a clear strategic vision. Articulating these objectives in plain language is a significant step towards establishing shared understanding about Alliance intentions and linking activities to a single overarching strategy.

Declaring full operational capability for the Hub also gives NATO a single centralized location to coordinate with regional partners. Consistent interaction, whether in the form of regular meetings or permanent liaisons at the Hub, can help dispel potential ambiguities about NATO’s objectives for its missions and operations in the south. This enhanced level of trust may, in turn, unlock several practical benefits.

For example, partners will be more likely to participate in the activities available from the “partnership cooperation menu” offered through NATO’s Individual Partnership and Cooperation Program, including anything from defense capacity building assistance, such as the recent measures approved for Tunisia, to participation in specialized courses at the NATO Defense College. In theory, this sort of collaboration should reduce instability in partner countries, benefitting NATO members in the long run by reducing the severity of transnational challenges like migration and terrorism. Highly-visible projects focused on human security, such as assisting with mine detection or the destruction of dangerous munitions, are not only important on their own merits, but may even have reputational benefits for NATO by enhancing approval amongst MENA publics, bolstering the Hub’s public diplomacy mission in the process.

Partners may also, over time, become more comfortable with information-sharing arrangements, thereby boosting the effectiveness of the Hub’s “horizon-scanning” mission. Immediate benefits of this could be closer coordination on the threat of returning foreign terrorist fighters from Syria, the swapping of best practices on shared security concerns, and even information-sharing on Russian activity in the MENA region.

Including non-governmental organizations and civil society groups in these conversations, as indeed the Hub has already begun to do, will provide additional perspectives from stakeholders with greater “on the ground” knowledge than NATO could hope to obtain alone. Working closely with local groups and demonstrating concern for their priorities may also provide further reputational benefits. Over time, this could enhance NATO’s understanding of the south as an operational environment, allowing it to further refine its overall strategy.

The Hub is not an immediate solution and one should not expect dramatic results overnight. Staffing and funding arrangements, for example, have yet to be developed. The internal political debates that have stymied progress in the past will never truly disappear. The benefits are achievable but reaching them is neither guaranteed nor likely to happen in the short term.

The Hub, however, provides a centralized venue for partner interaction and strategic development that could, over time, provide the impetus needed to forge stronger partnerships and a more secure Alliance.

Colin Wall is an intern with the Transatlantic Security Initiative in the Atlantic Council’s Scowcroft Center for Strategy and Security. Follow him on Twitter: @ColinCWall