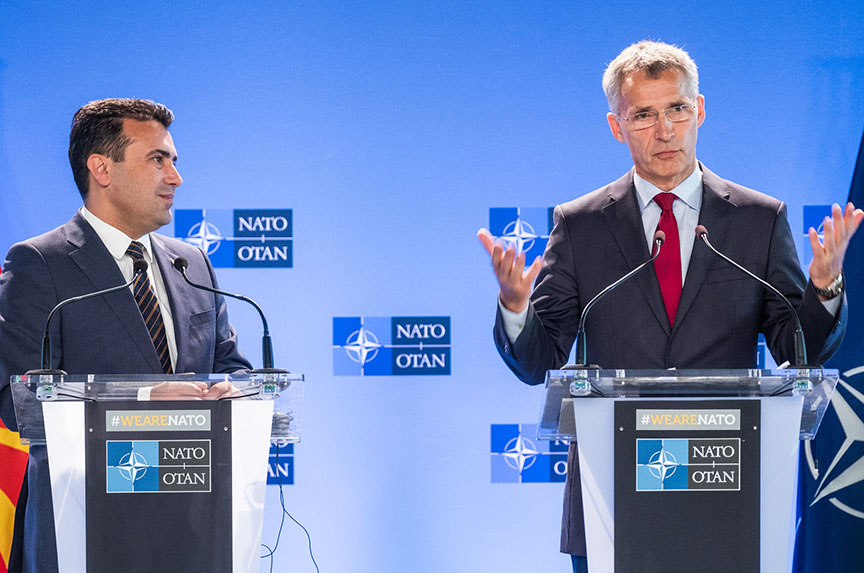 On June 12, the prime ministers of Greece and Macedonia announced a historic agreement to settle a decades-long quarrel over Macedonia’s name. Leaders from around the world praised the Balkan neighbors for putting aside nationalist disputes. The deal is not yet done, however. Opposition to the agreement is strong in both countries. If the new deal is to hold, Macedonia needs more than congratulatory tweets and letters.

The “name issue” is no abstraction. Greece has used it, among other things, to block Macedonia’s accession to NATO, and the prospect of lifting Greece’s hold may have convinced the Macedonian government to face down its own nationalists and seek a resolution. To seal the deal, therefore, NATO’s summit in Brussels on July 11 and 12 should issue a formal invitation to Macedonia to join the Alliance, as they had been prepared to do ten years ago, but could not because of the name issue.

During NATO’s summit in Bucharest in 2008, Alliance members agreed that Macedonia had achieved the criteria for membership; they were prepared to extend it along with invitations to Croatia and Albania.  But Greece refused to lift its veto and Macedonia was left behind.

Jaap de Hoop Scheffer, NATO secretary-general at the time, reaffirmed the importance of the “Perry Principles”—the standards countries had to reach to be invited into NATO as articulated by US Secretary of Defense William Perry in 1995. These included democracy, a functioning market economy, civilian control of the military, a degree of interoperability with NATO, and good relations with regional neighbors. Macedonia’s unresolved name dispute with Greece was the barrier that could not be breached, but the summit ended with De Hoop Scheffer stating that Macedonia would get its invitation, “as soon as possible, as soon as a solution will be found.”

In the decade since, NATO membership has been used as the proverbial “carrot” to entice Macedonia to make difficult and often unpopular reforms, with the understanding that it will eventually make it into the club. The new agreement between Greece and Macedonia is a vindication of this approach. It took ten years, but the deal is nonetheless a powerful reinforcement of the positive influence that the prospect of NATO membership can have in encouraging countries to put aside nationalist disputes. It is a testament to the power of the accession process that Macedonian Prime Minister Zoran Zaev and Greek Prime Minister Alexis Tsipras were emboldened to take a political gamble and usher through a solution that would otherwise have been impossible.

If NATO does not take this opportunity to reward big steps forward, how can the transatlantic community continue to expect that countries will make them? In other words, delaying the decision to bring Macedonia into the NATO Alliance will undermine the credibility of the institution as a whole.

The window to do a deal is open, but could close absent NATO action. Opposition to the deal has been vocal, and protests broke out in both countries only days after the agreement was announced. Under the conditions of the deal, the two countries must ratify the agreement in their parliaments. The Macedonian parliament voted in favor of the agreement for a second time on July 5, after Macedonian President Gjorge Ivanov vetoed the measure the first time it passed. According to the constitution, Ivanov cannot block the accord from going through the second time.

The name deal will also be put to a public vote in a referendum scheduled for September or October of this year. Macedonia desperately needs this NATO “win” now, or there is a real risk that whatever tenuous public agreement there might be on the benefits of the name change could swing in the other direction and result in rejection during the referendum. The opposition in Macedonia, in particular, is well-positioned to take any potential reluctance by the West to bring Macedonia into the fold and exploit that for its own gain. NATO’s hesitation now would allow Macedonian nationalists to argue that the Euro-Atlantic community does not keep its promises. That could tip the balance against the deal, causing it to unravel, since Greece will not ratify the agreement until—and unless—the referendum passes and Macedonia changes its constitution.

When asked in late June about the prospects of a forthcoming invitation, NATO Secretary General Jens Stoltenberg said, “I expect and I hope that NATO leaders at the summit will decide to start accession talks.” Should Macedonia indeed receive its long-awaited invitation at this year’s summit, Greece should not fear that Macedonia would pocket the achievement and then renege on the agreement. The invitation would allow the process to go forward, but Macedonia would have to come through with its part of the deal in any case.  All twenty-nine current NATO members must formally ratify new membership in their respective national parliaments, so Greece will still have the option of withholding ratification until after Macedonia makes the promised changes to its constitution.

The Greek and Macedonian governments must work fast before the momentum slows and the moment passes. Welcoming Macedonia with open arms at the NATO summit in Brussels will help to ensure that the hard work by both countries to achieve a lasting resolution on the name issue is not for naught.