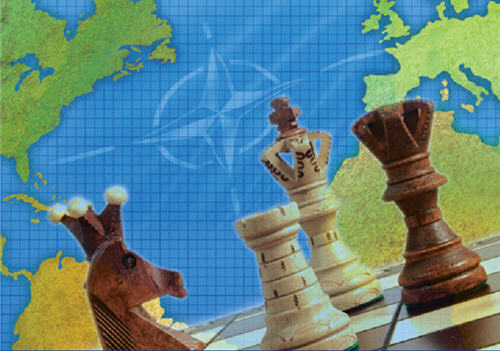 Daniel Larison responds to "The Case Against the Case Against NATO" with a strong Realist rebuttal.  But it continues to conflate legitimate concerns about American interventionism with the Alliance itself.

The idea that “we’re all in this thing together” makes a great deal more sense if there were a general conflict or geopolitical struggle in which Americans and Europeans share common cause. There is a strong desire to make the “war on terror” fit that description, but it doesn’t. This brings us back to the matter of “out of area” operations. James writes that “it simply made sense for the West to continue working together to achieve our shared interests,” but the idea that Europeans share security interests in central Asia or the Near East with America doesn’t really make sense. It’s true that the “out of area” missions are not attempts to find “new conflicts to justify NATO’s existence.” They are the product of deciding that the post-Balkans NATO will be an international stabilizing force. The “out of area” missions have resulted from the re-definition of NATO that already happened in the 1990s when member states were confronted with the Alliance’s obsolescence for the first time. Once NATO opted for international vigilantism in Kosovo, there were all kinds of conflicts that could conceivably require the Alliance’s attentions.

We’re in general agreement here.  While some European states, notably the UK and France, have security spheres that are broad if not global, most of the European Allies do not.

So, yes, there will be times when the United States decides to use force and the rest of NATO won’t join in. But that was true even during the Cold War and even in the shared struggle against Communism.   NATO didn’t fight in Korea or Vietnam, even though some of its members did join us in those fights.

I happened to oppose the Kosovo mission.  But, while NATO fought it together, it wasn’t an Article 5 mission.   The United States joined because President Clinton decided — with substantial arm twisting by Tony Blair — that it was in America’s long term interest to intervene.   And, while that set a precedent for "out of area" missions, it didn’t mandate them.  Indeed, only Afghanistan has followed since — and it was deemed an Article 5 attack.

It’s true that the U.S. has intervened and will continue to intervene militarily in other countries without NATO’s support or approval, but it is hardly news to James that many of the new allied governments brought in during the last two rounds of NATO expansion were among the most willing and eager to lend political cover to the invasion of Iraq. Yes, a few NATO members strongly opposed the invasion, but by my count at least twelve Alliance members rallied behind the U.S. in a war that clearly had nothing to do with European security. Albania supported the Iraq war and sent a few dozen soldiers as part of the initial invasion. This was before it had formally been accepted into NATO, and it was mostly done out of gratitude for U.S./NATO support for the KLA terrorists in Kosovo, but one can also see Albanian support in terms of its desire to be accepted into the Alliance. Slovakia was another would-be member that sent soldiers to Iraq to secure its place in the Alliance.

The enthusiasm of central and eastern European governments to help invade Iraq was a small but significant political boost for pro-war arguments in 2002-03, and Italian and Spanish participation left Germany relatively isolated among the Alliance’s major European members. All of this helped to maintain the fiction that the invasion was a “coalition” war akin to the Gulf War rather than an overwhelmingly Anglo-American effort. I should add that all of this enthusiasm was only at the official, government level; the nations of central, eastern and southern Europe were against the war as much as any other European nation. Without NATO expansion since 1996, it is hard to imagine many governments in Europe besides Britain lending any support to the Iraq war.

First, while it’s easy in hindsight to say the Iraq War "clearly had nothing to do with European security," that obviously wasn’t  how Tony Blair and others saw it.   Rather, it was viewed as containment of a rogue state that was supporting international terrorism, flouting international law, and on the verge of developing nuclear weapons capability.  That we were spectacularly wrong on the last point doesn’t change that.

Second, it’s doubtless true that many of the countries of "New Europe" who had either recently joined NATO or aspired to do so were among the more eager members of the Coalition of the Willing.  But that’s hardly NATO’s fault.   These states, having only recently been freed from tyranny, simply had a different view of the world than the older democracies.   And wanting to please the world’s last remaining superpower, whether out of gratitude or desire to curry favor, is hardly an irrational policy, especially when it comes at the cost of sending a relative handful of troops off to war.

Admittedly, these new NATO members are militarily very weak countries, and other than Poland they have not contributed much to U.S.-led war efforts. That just points to a more significant flaw with NATO expansion: it extends security guarantees to countries that contribute next to nothing and which are net liabilities to the United States. If the Cold War-era NATO enhanced American security, the post-Cold War NATO detracts from it.

Again, we’re in general agreement.  While it’s a decided minority opinion among the senior staff at the Atlantic Council, I’ve generally opposed the expansion of NATO because most of the newer members have added too little to the mix.  I understand and support the political goals behind doing so  — bringing former adversaries into the Western community and largely removing their fears of Russian domination — but was never sold on NATO membership as the right way to accomplish them.

Regarding NATO expansion, I argued last week that expansion has been clearly detrimental to European stability and security because of the role of expansion in escalating the “frozen” conflicts in the Caucasus. James’ reply on this point is probably his weakest:

The counter-argument to this is that the problem in Georgia was not the proposed expansion of NATO but rather the lack of it. Would Russia have invaded the sovereign territory of a NATO Ally, risking military retaliation from the West, over its rather meager interests in South Ossetia and Abkhazia? It’s unknowable but I rather doubt it.

Yes, that is the counter-argument, and it is one that doesn’t have much evidence to support it. Russia didn’t just happen to invade Georgia. Yes, it goaded Saakashvili into lashing out, but he was the one who lashed out and escalated the conflict. The Georgian war in 2008 was the result of Saakashvili’s belief that he had the backing of the West and could “reintegrate” South Ossetia without suffering the consequences of using force against a region he knew to be under Russian control. Would Saakashvili have shown greater restraint and patience if he had a formal security guarantee from NATO? All that he needed in 2008 was a vague promise given at the Bucharest summit earlier that year that Georgia would eventually be granted membership, and that was enough to enable his reckless behavior. Had Georgia been admitted to NATO earlier in 2008, it would not have made Saakashvili less reckless, but it would have obliged the U.S. and all our allies to defend Georgia or show our security guarantees to be the empty, and therefore dangerous, political gestures that I believe most of them really are.

To clarify:  I opposed and oppose bringing Georgia into NATO for essentially the same reasons. I too believe that NATO expansion should be weighed carefully and extended only to states whose security we’re absolutely prepared to back at the cost of American blood.  I merely offer the counterpoint that, while we doubtless emboldened Saakashvili’s foolishness with the talk of the inevitability of Georgian membership, it’s doubtful Russia would have been so bold as to invade a NATO member state.

Regardless, one can be wary of expanding NATO while still believing in its virtues as a force for good.   While the interests of the United States and its European Allies aren’t identical, they frequently overlap.   And it simply makes sense to keep in place an enormously successful institution for promoting our shared security, ensuring standardization of matériel and procedures, and working together on a regular basis to ensure familiarity and cohesion.