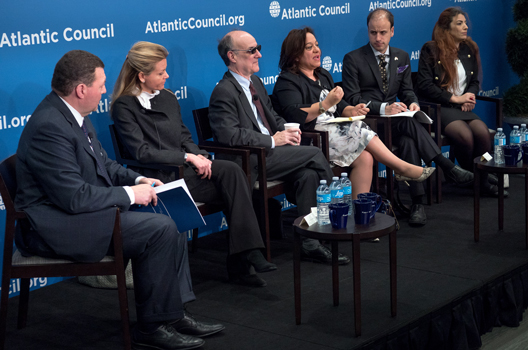 In order to end the civil war in Libya, those competing for power must meet, negotiate, and establish a path to free and fair elections early in 2018, Jonathan Winer, a former US State Department special envoy for Libya, said at the Atlantic Council on March 9.

The three factions claiming sole legitimacy and authority in Libya should “negotiate a deal… come together for the good of the country, create an interim government, and have elections in 2018,” said Winer. Of international allies and partners invested in the region, he said, “everybody pretty much sees it the same way. That’s what needs to happen.”

In the wake of the Arab Spring uprising in 2011 that ended Moammar Gadhafi’s forty-two-year rule in Libya, the North African nation has struggled to unite, and became fractured by competing governments supported by militias. The three men claiming control of the country are Fayez al-Sarraj, prime minister and head of the internationally recognized Government of National Accord (GNA), which is based in Tripoli; Agila Saleh, president of the House of Representatives (HOR), which is based in the eastern city of Tobruk; and Khalifa Haftar, who leads the armed forces in the east.

According to Winer, who served in the Obama administration, each of the three leaders defines themselves as the sole source of power in the country. “There’s a crisis of legitimacy there; no one has it completely,” he said. He said “they need to have a legitimation process in order to bring democracy forward.”

However, Winer said, “they’re unwilling to do that.” In February, al-Sarraj and Haftar were invited to negotiate in Cairo. However, Haftar refused to meet with al-Sarraj, quashing the attempt to reach a consensus.

It is the division of these factions, refusal of the leaders to negotiate, and the ongoing combat between armed groups that support them throughout the country which has perpetuated the civil war. However, Winer believes there is hope, with the help of the international community, to bring all three leaders to an understanding. “It doesn’t mean I’m optimistic about it,” he said, “but I’m not hopeless about it.”

Winer joined Nebras Attia, human rights activist; Federica Saini Fasanotti, nonresident scholar at the Brookings Institution; Azza Maghur, senior lawyer at Maghur & Partners; and Jason Pack, executive director of the US-Libya Business Association, to discuss the prospects for ending the civil war, and to propose a roadmap to peace and prosperity in Libya. Karim Mezran, senior fellow with the Rafik Hariri Center for the Middle East at the Atlantic Council, moderated the discussion.

In an attempt to prevent further fracturing and conflict in Libya, the United Nations (UN) introduced a peace deal to form an interim unity government. The warring factions signed the agreement, yet it has proved ineffective, and the conflict continues.

“There is no legitimacy whatsoever today in Libya,” said Maghur. In her view, perpetuating the concept of any existing legitimacy resulting from the UN agreement only contributes to the lack of functionality in the country. “This was not a genuine agreement that can be realized,” said Maghur, adding: “I’m not only skeptical, I think it was a failed agreement.”

“The agreement didn’t work and is not working,” according to Fasanotti. “What we have to do is rethink the processes.”

Currently, there is a tense balance between competing stakeholders on the ground and international actors invested in the conflict and its resolution. Attia said that outside states see Libya from a perspective from which they cannot truly understand the dynamics of the problem. She described how, as a result of the UN deal, Libya now has a series of competing governments, none of which are accepted locally. International actors communicate with those who hold the power to achieve a resolution, according to Attia, yet these are the individuals causing the problem.

“The people in Libya have no voice on the global stage,” she said. Consequently, Attia called for a solution that comes from the people. The panelists agreed that Libya requires a bottom-up solution in order for peace to be effective and lasting.

“Starting from the top and moving to the bottom is wrong because we do not have a state… people are not used to this,” said Fasanotti. She said that the creation of a government must be established among leaders, but its implementation should be conducted on a local level. The main focus of a reinvigorated infrastructure should be job creation and opportunities for young people. Attia described how young people led the revolution against Gadhafi, yet in its wake have found themselves disenfranchised. The conflict in Libya, and the frustration of the youth, paved the way for the Islamic State of Iraq and al-Sham (ISIS) to gain a foothold in the country.

While ISIS does not hold territory in Libya, a peaceful resolution to the conflict is essential for minimizing the extremist group’s influence. According to Attia, Libyan youth must be invested in the future of their country, which in turn relies on the government investing in their future, otherwise they will resort to extremism. “If Libya is going to work and be a key part in the global fight against ISIS, it needs to provide jobs for its citizenry and a bottom-up structure,” said Pack.

However, “the complex stakeholders in Libya and the fluidity of alliances is mirrored on the international scene,” said Pack. He said that “the UN mediation process is separate from, but should work together with the regional mediation process.”

He described how the dynamic between countries with a hand in Libya’s conflict resolution is one primarily of competition, with each stakeholder looking to gain from their role in the peace process. According to Pack, regional and Libyan actors are competing for dominance in the country. Meanwhile, Egypt and Russia seek to establish themselves as interlocutors so as to increase their own power on the world stage and set the parameters of the solution in Libya. Their support lies with Haftar.

This situation has arisen from “a vacuum of Western engagement,” said Pack. He said of Russian attempts to achieve dominance over Libyan affairs: “we can see this as an attempt to displace the US, UK, UN approach.” Regional actors as well, such as Algeria and Tunisia, seek to sway the course of events in Libya in the absences of Western influence.

However, he said, these states lack the power to bring stakeholders on the ground in Libya together. “Only American leadership can answer this question,” said Pack, adding, “the first role [of the United States] is to align the allies.”

According to Winer, if Egypt, Algeria, Tunisia, Russia, and the United States are not aligned in their intentions in Libya, “the country will continue to devolve in civil conflict.”

Pack called on the new administration of US President Donald J. Trump to recognize the value of US engagement in Libya, take a stand, and fill this vacuum of power. If the United States backs away from the issues at hand in Libya, “the concerns that this [Trump] administration might have about security, migrants, arms trafficking… I don’t think any of that will be dealt with,” he said.

Winer echoed Pack’s call for a US role in the peace process, claiming that the theme of past US engagement in Libya has been the encouragement of negotiation. “It was neutral, it was inclusive, and it was intended to reflect and incorporate local interests,” he said, again emphasizing the need for a bottom-up approach to the peace process. Winer urged future officials to maintain this path to negotiation defined by inclusion and dialogue, and directed toward a free and fair election.